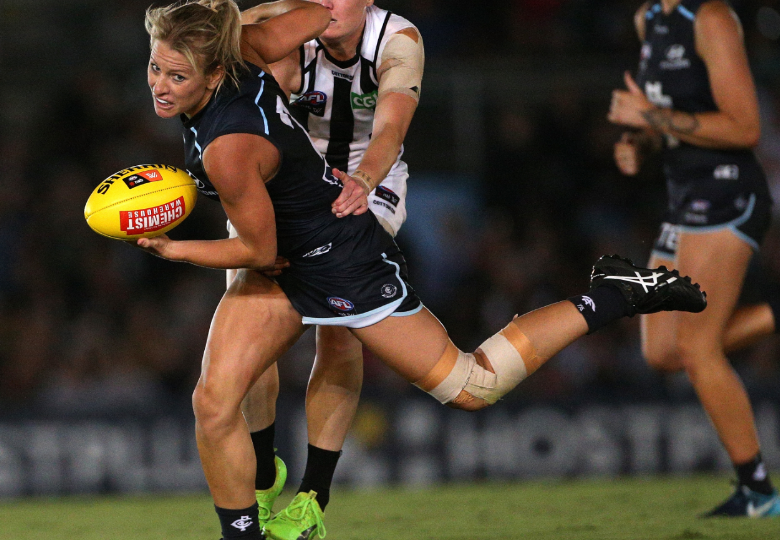 Katie Loynes of Carlton (left) is tackled by the Pies' Stacey Livingstone in the AFLW Round 1 match between the Carlton Blues. AAP/Hamish Blair

Carlton have opened the 2018 AFL Women’s season with a hard-fought eight-point win over Collingwood in front of another big crowd at Ikon Park.

While the AFL will be pleased at the turnout, efforts to encourage greater scoring fell flat with neither team able to kick a goal in the second half.

Carlton skipper Brianna Davey led the way with 16 possessions, with high-profile recruit Tayla Harris also prominent for the home side.

“It was a really contested game and at different times each team had the momentum.

“But we found a way (to win) which I’m really proud of.

“They dug in and really fought hard … which was really encouraging.”
First-round draft pick Chloe Molloy starred in her debut game with 20 touches for the Magpies.

Collingwood’s Jasmine Garner kicked the opening goal of the inaugural AFL Women’s season and history repeated when she kicked truly from a set shot to open proceedings.

Carlton poured on the defensive pressure and Harris helped her new side to a seven-point lead at quarter-time with her first goal in navy blue.

Amelia Barden goaled as the Pies enjoyed a bright patch in the second term without making the most of it on the scoreboard.

Neither side managed a goal in a tense third quarter in which Sarah D’Arcy was reported for kicking Carlton’s Sarah Hosking in an ugly incident.

The Pies camped in their attacking half in the final term but their efforts were stifled by a desperate Carlton defensive effort that secured the points.

“We’re really close … there are just a few small areas that we need to work on.

“We just lacked a bit of composure at times.”