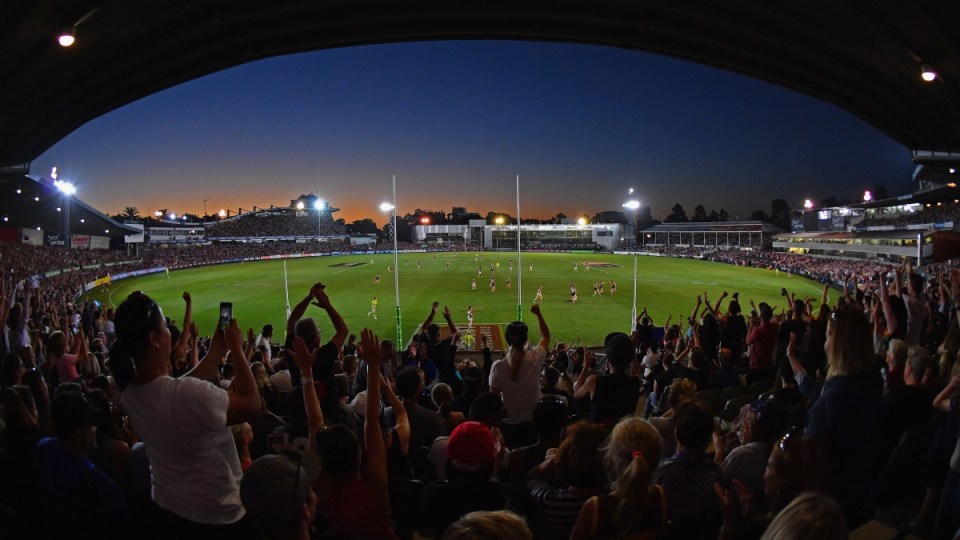 Will the big crowds return in season two? Photo: AAP

Season one of the AFLW competition was a roaring success.

Even those who believed in the idea were surprised by the attention it generated, while sceptics were turned into true believers.

Remarkably, so many people turned up to last year’s history-making clash between Carlton and Collingwood that the ‘full house’ sign went up and fans were turned away.

The opening round also attracted in excess of 1.7 million television viewers nationally.

But with the product no longer the shiny new toy of the Australian sporting landscape, is the competition at risk of suffering the second-year blues?

“Not from the information I have – from what I see, what I do, what I hear,” women’s football pioneer Susan Alberti told The New Daily.

“I know what the girls have been doing – how much more training and everything else they’ve been doing.

“I know we’re going to see some much faster girls, stronger girls, and I think we’ve ironed out some of the teething problems.

“It’s proven a lot of the naysayers wrong; we’ve shown that we can do this.”

Alberti’s association with women’s football has been a long and, at times, frustrating one.

She was made to give up playing football at 15 because of the lack of opportunities afforded to women but, later in her life, made big donations to keep the sport alive and was a tireless advocate for a national league.

The long-time board member of the Western Bulldogs isn’t just cheerleading about AFLW because she wants long-term success, either.

There is tangible evidence.

“It’s growing exponentially; there’s 500,000 [females] playing the game now, and there’s waiting lists at clubs. It’s so popular, and it’s just going to get bigger and bigger and bigger, I have no doubt about that whatsoever,” she said.

Despite the overwhelming success in 2017, the AFL resisted the temptation to expand the competition in 2018, with the same eight teams (Adelaide, Brisbane, Carlton, Collingwood, Fremantle, GWS, Melbourne and Western Bulldogs) again set to compete this year.

Geelong and North Melbourne will join in 2019, while Gold Coast, Richmond, St Kilda and West Coast will be added the following year.

“I think this is a very smart way of introducing the new teams, it gives them an opportunity to get their level of talent there,” Alberti explained.

Traditional AFL rivals Carlton and Collingwood will again open the season on Friday.

Magpies player Melissa Kuys said she is proud of what AFLW has done for women’s sport.

“We get around and do appearances, the majority of them at schools, and seeing the young girls’ faces … and being that role model … seeing them aspire to be like yourself is quite incredible,” the 30-year-old midfielder told The New Daily.

For the Blues, former netballer Maddison Gay is one of many code-hoppers in the league, and after a year watching from the sidelines, the 21-year-old rookie elevation is in line to make her debut.

“I was so surprised with the crowds they got (last year), it was all unexpected,” Gay told The New Daily.

“Being in the crowd watching on just makes you want to get out and there join them – that’s what made me jump to football.

“Being a part of what AFLW is and being part of Carlton is just amazing.”

AFLW: The big question on everyone’s lips going into the 2018 season