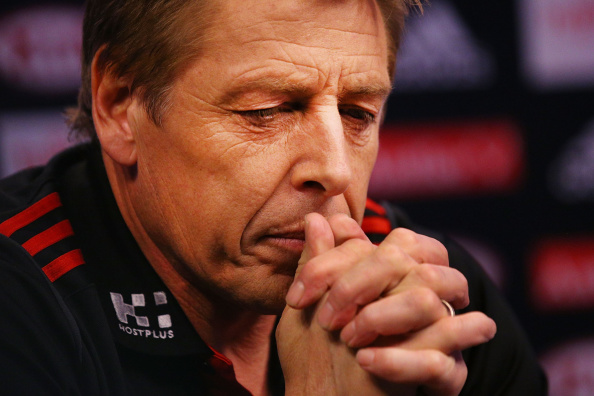 Former Geelong and Essendon coach Mark Thompson has been arrested and released without charge following an investigation into drug trafficking.

Police confirmed on Tuesday that a 54-year-old Port Melbourne man was arrested and released earlier that day, “pending further enquiries”.

“As the man has now been arrested we won’t be providing any further commentary on the matter,” police said in a statement.

Three other people have been charged with drug trafficking following the Port Melbourne raid and another search in Geelong.

They include Thomas Windsor, 28, of Port Melbourne and 31-year-old Lara man Karl Holt, who were reportedly staying at the property owned by Thompson and have links to the Bandidos bikie gang..

A 22-year-old Mill Park woman was also charged and remanded in custody.

The trio were remanded in custody and are due to face court at a later date.

Police said the arrests were part of an ongoing investigation into drug trafficking.

Earlier this week, Victoria Police would not comment on the nature of Friday’s raid, only issuing a brief statement.

“Detectives from the Southern Metro and Geelong unit executed a warrant on January 5, 2018, at Rouse St Port Melbourne at 9:30am,” it said.

“No arrests were made, the investigation is ongoing.”

“Police. Don’t move,” officers shout as they burst into the converted warehouse.

The home of former AFL premiership player and coach Mark "Bomber" Thompson has been raided by police. @SharnelleVella #7News pic.twitter.com/2dYIEZWQig

Thompson, known to AFL fans as ‘Bomber’, played 202 games for the club from 1983 to 1996. He coached Geelong to premierships in 2007 and 2009 before returning to Windy Hill as James Hird’s senior coaching assistant.

He was at the club during its darkest era when a supplements scandal led to Essendon players being suspended for the 2016 season.

Thompson was fined $30,000 for his role, although he later filled in for Hird in 2014 while the Essendon coach served an AFL suspension.