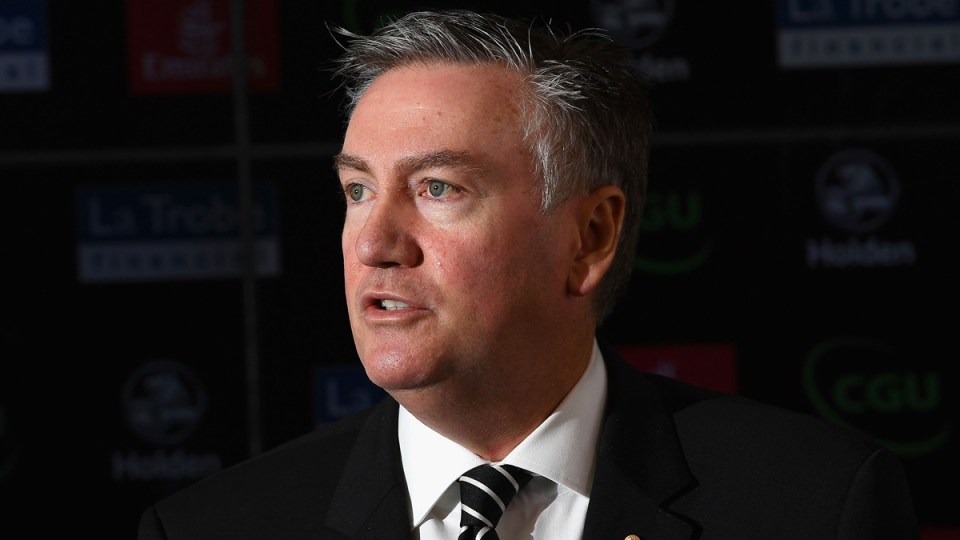 The Collingwood president speaks to the press. Photo: Getty

Collingwood president and media identity Eddie McGuire is concerned that changes to AFL rules could tempt players into taking banned and performance-enhancing drugs.

Existing regulation surrounding the AFL’s interchange rules limit clubs to 90 changes during matches – a reduction from 120 in 2014.

And with a further reduction suggested, McGuire has expressed his concern, fearful that players would consider pushing the boundaries.

Using the example of EPO – a banned substance that helps athletes with endurance – McGuire warned the AFL when considering a rule change.

“I think the AFL have got to be careful,” McGuire said on Triple M on Thursday.

“When the AFL brought in the limitations on the interchange, to me, the first thing I said at the presidents’ meeting, so I said it publicly there and I’ll say it again, was, ‘you’re going to drive people into looking at taking EPO’.

“Now of course when I said that, everyone went nuts, but it seems night follows day, so that was always a big issue.

“I don’t think it’s happened, but I still think you’ve got to be careful when you’re driving athletes into a position where they have to think about, ‘how can I get fitter when there’s nowhere else to go?’

“When you’ve slept in an oxygen tent, when you’re not drinking, when your skin folds are down and you’re still gasping for air and your tongue’s hanging out at the 10-minute mark of the last quarter and the coach is saying, ‘get on and run’, they’re the things you look at and say ‘geez, we’ve got to be careful’.”

EPO is the drug which disgraced cyclist Lance Armstrong made famous, with the American – who won seven successive Tour de France titles before having them stripped – using the substance in one of sport’s most demanding events.

McGuire added that the AFL could make its stance against drugs tougher but said the current system was “pretty good”.

“[We need to] keep our game as natural as possible, and then you mitigate the circumstances as much as you possibly can,” he said.

“We’re in a position with footy [where] we don’t need to play in the international level, so we can be as hard as we want to on our drugs in footy and I think the AFL are doing a pretty good job but I’d toughen up even further.”

The AFL was rocked by a case involving banned substances that saw 34 past and present Essendon players suspended for the entire 2016 season for doping offences.
The offences related to the club’s controversial ‘supplements program’ in 2012. Essendon was hit with a range of other punishments, including being removed from the 2013 finals series, a $2 million fine and a season-long ban for then-coach James Hird.
Follow Us