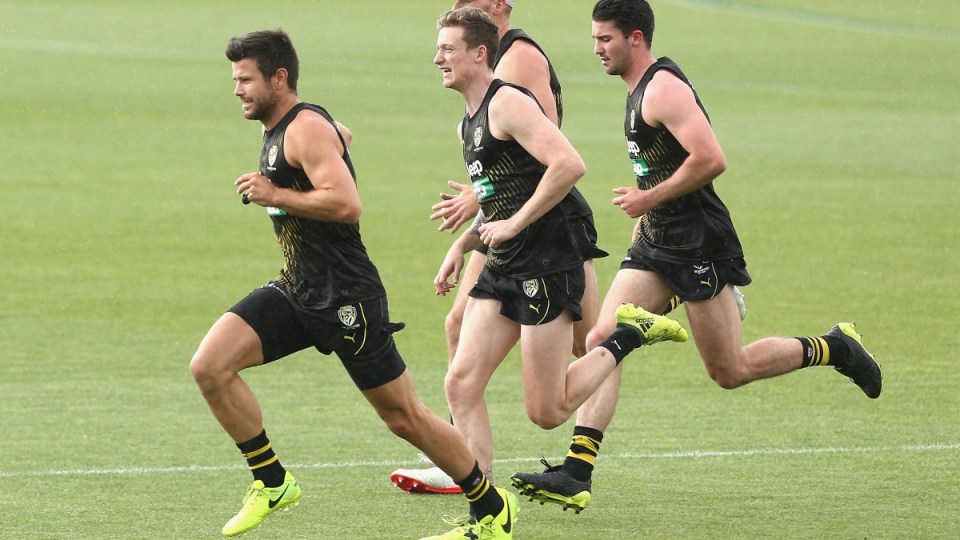 Trent Cotchin has led Richmond training for the first time as a premiership captain, vowing to maintain the spirit that led the Tigers to the 2017 flag.

Richmond’s resumption on Monday – along with beaten grand finalists Adelaide and finalists Sydney – means all AFL clubs have started their journeys to the 2018 premiership.

This year, the Tigers will be the chased – not the chasers – but Cotchin said their attitude wouldn’t be changing.

“We’re going out there to hunt as we did in 2017,” he said. “We created a really energetic and exciting environment from day one of pre-season and we’re looking to do the same.

“The outside will want us to crumble under that pressure, but the reality is we had a really consistent year in 2017.

“We put some things in place and we continued to grow.

The foundations that we created last year, if we can continue to build on those and repeat the sort of effort and intensity, that will hold us in good stead.”

As was always going to be the case in the savage world of AFL football, Cotchin found himself addressing the notion of a premiership hangover just weeks after the club’s first flag in 37 years.

The Bulldogs found life tough after their 2016 success but Cotchin said the Tigers wouldn’t try and avoid those pitfalls.

“Without being inside four walls, you don’t know how they approached it,” he said.

“I don’t know if it’s a premiership hangover. For whatever reason some clubs don’t perform to the level that’s expected the year following.

“Everyone’s different. That’s the beauty of our group. We’re unique and we’ll find our own way forward.

“There will be challenges, there goes a lot of luck into winning premierships but there’s also a lot of hard work and we look forward to sinking our teeth into that.”

Cotchin guaranteed there would be “no issues where guys are coming back unfit” ahead of day one at Punt Road, though he was unsure just where he lay after an off-season of celebration.

“I’ll see when I’m out there with the boys … I’ve worked on the tan so that always helps when you run out there and the fitness coach is looking at you.”

Meanwhile, the father of Tiger Dustin Martin won’t be returning to Australia anytime soon despite the immigration minister admitting an error was made when his visa was cancelled in early 2016.

The Federal Court in Sydney on Tuesday heard Peter Dutton had agreed the decision to deport Shane Martin to New Zealand over his criminal record and bikie links should be quashed.

But that doesn’t mean the father of the Richmond premiership player is about to jump on a plane back to Australia.

“The outcome of this litigation will not result in the reinstatement of Mr Martin’s visa,” the immigration minister told AAP in a statement on Tuesday.

“Mr Martin remains offshore and has no visa to enter Australia.”

AFL: Trent Cotchin back on track and ready to take Tigers to new heights