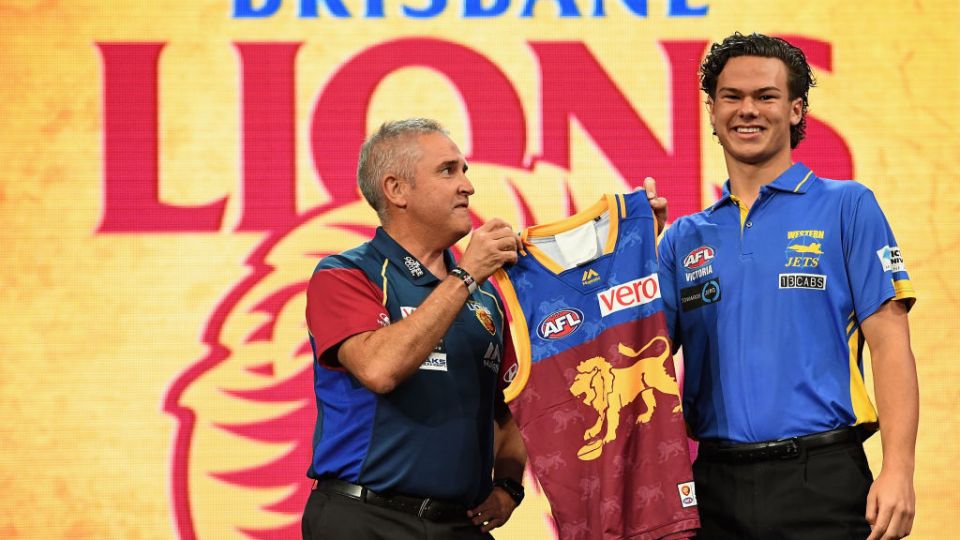 New Brisbane Lion Cameron Rayner is the talk of the football world after being taken at pick one in Friday evening’s 2017 AFL Draft.

The Lions ended months of speculation about who would be judged the best young player in the country by calling out the 18-year-old’s name, and he was understandably delighted afterwards.

“I’m just really excited and happy to be a part of the Brisbane Lions,” Rayner said.

“I think it’s such a big honour seeing some of the players that have been before me (at No.1). I’ve got some big shoes to fill.”

The 187 centimetre and 88 kilogram half-forward/midfielder was drafted from the Western Jets and has been compared to Richmond star Dustin Martin for his ability to burst away from packs and kick goals.

Getting used to the extra pressure and attention is something Rayner will have to deal with – and it won’t always be easy.

Hawthorn champion Luke Hodge – the four-time premiership player taken with the No.1 pick in the 2001 ‘super’ AFL draft – candidly told The New Daily that he battled with the expectation through the early stages of his career.

“I struggled. I struggled with the fact that when I got drafted, I was a raw kid,” Hodge said.

“I was a young kid from Colac who went from a 13,000-person town to Melbourne.

“The next thing there’s TV shows, papers, radio talking about you. I didn’t handle that well.”

Particularly difficult for Hodge were the constant comparisons with the second and third picks of the 2001 draft, Luke Ball and Chris Judd.

All three went on to become genuine AFL stars but Judd’s fast development – coupled with Hodge’s slow start, exacerbated by groin injuries – made things tough for the Hawks’ ex-skipper.

“’Juddy’ was playing games consistently, winning best-and-fairests, winning Brownlows, so that comparison [was tough],” he said.

“And rather than go and speak to other people who have been through that, I sort of shut up shop, went into myself and would just go back to Colac and see my mates because they treated me as they always had.

“And in Melbourne, it was a different story.”

Hodge said if he had had his time again, he would have talked far more to those around him to seek advice.

“It’s like a footy game. If you’re going to try and do it all yourself, you’re not going to succeed.

“Where young fellas find themselves in trouble is … if it [pressure] is on what goes on in your head … that’s where you need those blokes around you, to ask them, and they will be straight with you, but also give you different bits of advice.”

Hodge will be well-placed to help Rayner, given he crossed to the Lions in a trade last month.

The Hawthorn star had initially retired, before being tempted with a two-year offer to play at the Lions and help the club’s young players.

He explained how the Hawks tried to keep him at the last minute, but that he retired “for the younger players” at the club, who he loved working with through the 2017 season.

“Playing with those guys and just helping explain … I really enjoyed watching them develop through the year,” he said.

“You get a thrill out of watching someone get better because of the advice you give to him.”

The two-time Norm Smith medallist who still calls himself a “very, very loyal Hawthorn person”, added he is not completely sold on coaching after football – but that it is a “possible pathway”.

Hodge’s new book, The General, published by Penguin Books Australia, is on sale now. You can buy your copy here.

‘I struggled’: Luke Hodge’s advice for the AFL’s new No.1 draft pick