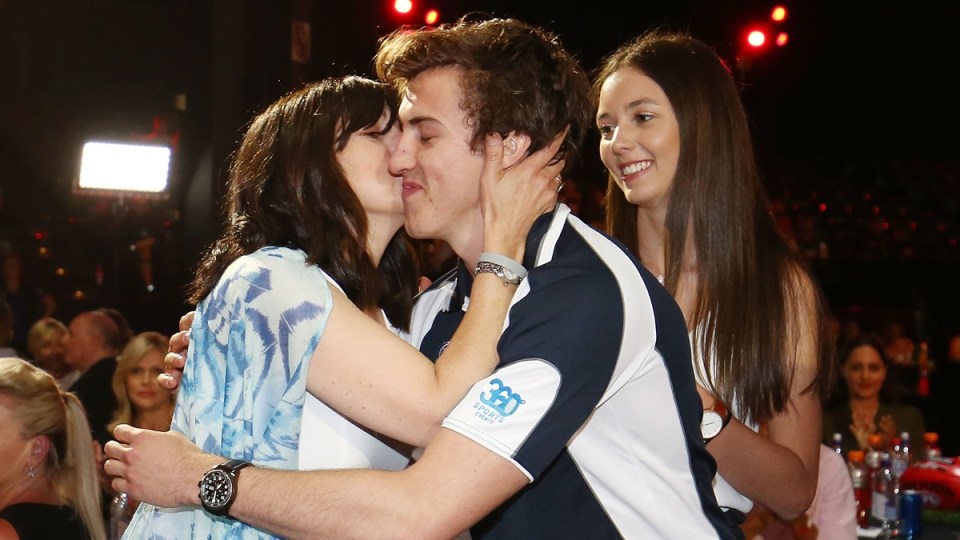 The 2016 No.1 draft pick, Andrew McGrath, is congratulated by his family after being picked by Essendon. Photo: Getty

Hundreds of teenagers across the country will be glued to television screens on Friday evening, knowing their life could change at any minute.

The lucky ones will have their name called in the 2017 AFL Draft, held at the Sydney Showgrounds, safe in the knowledge that, for the next two years at least, they will be a professional footballer.

Many of those picked will have to pack up and leave home, and mum’s cooking, to start a new life interstate, while others will be overwhelmed with disappointment when they do not hear their name.

The mix of emotions felt by those directly involved in the draft is unimaginable from afar, but like all current players, Richmond defender Nick Vlastuin has experienced the rollercoaster ride before.

“I was pretty confident in the year that I’d had – but I was nervous about where I could end up,” Vlastuin told The New Daily.

The Victorian got his wish, remaining in the state to join Richmond at pick No.9 in the 2012 draft.

“I just felt relief once my name was called out … and then excitement and nerves all in one,” he said.

He can barely remember the next hour.

“It’s all a blur from memory,” Vlastuin said.

“I remember getting a call on the night from [Richmond stars Trent] Cotchin and [Brett] Deledio and just being starstruck.”

While Vlastuin remained in his home state, many others aren’t so lucky.

They either go interstate or miss out altogether, with St Kilda champion Stephen Milne doing so in 2000.

“I was always hoping my name would get read out,” he told The New Daily.

“You don’t lose hope but you question yourself.”

The pressures are endless for those in the draft pool, and the strenuous lead-up is highlighted by the difficult juggle of football and year 12 studies.

“I was pretty fortunate in my draft year that I finished year 12 a year earlier than most … so I was just focusing on footy,” Vlastuin said.

But with enormous commitment to the game required, these young men are often left with little to fall back on in their careers.

“I was more nervous for the [2000] rookie draft than anything because it would have been my last hope if I didn’t get picked,” Milne said.

After missed opportunities, Milne was finally selected by the Saints with pick 23 in the rookie draft.

Draftees don’t have long to bask in the glow, though, with a demanding training schedule quickly bringing them back to earth.

“The next couple of weeks after you get drafted you’re on cloud nine,” Vlastuin said.

“Then training gets pretty tough and you just sleep, train and eat for the next couple of months.”

Despite being a first-round draft pick, Vlastuin said he never felt any additional pressure to succeed.

“Every pick gets the same two years on the contract.

“As soon as you get to a club they don’t talk about what pick you are anymore and you all get treated the same.”

The pick number is clearly inconsequential – so much so, Milne is unable to recall what number he was taken.

“It’s kind of the same, getting drafted or rookie drafted, because it’s the chance to play at an AFL club,” he said.

AFL Draft: Players open up on what the night is really like