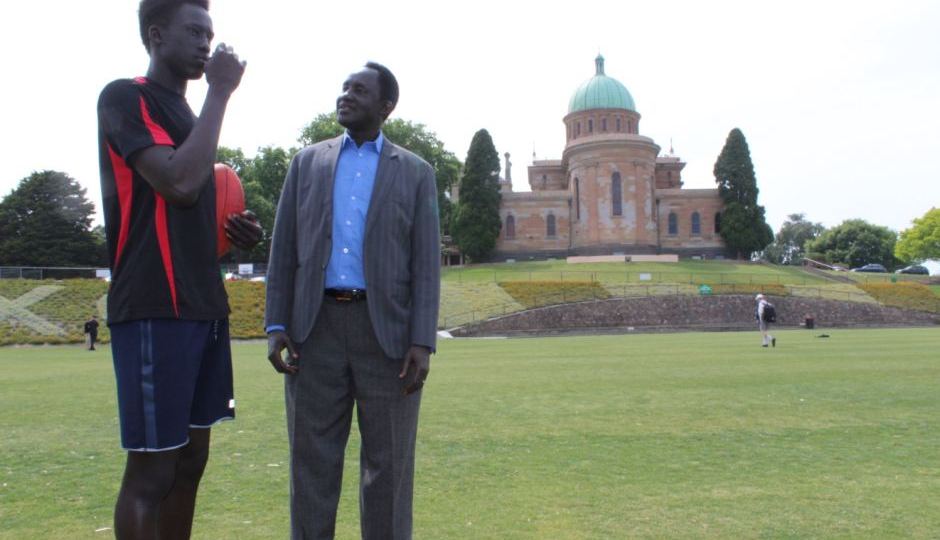 Changkouth Jiath said he once thought Australian Rules football was a “stupid game”, but this Friday he will become a professional.

Born in an Ethiopian refugee camp, Changkouth grew up in country Victoria and earlier this month he was nominated by the Hawthorn Football Club, who is committed to drafting him.

But Changkouth (who goes by CJ) said he never imagined himself playing Australia’s indigenous game.

“My school mates were always having a kick of the footy and I would always look over and see them playing when I was playing basketball,” he said.

“They invited me to come over and train at the local football club (in Morwell) and ever since then I fell in love with the game.

“It was kind of a weird-shaped ball and I thought it was stupid. But ever since I started I tried to motivate myself to be better.”

He instantly attracted the eye of local scouts and was soon playing in the AFL feeder league known as the TAC Cup.

CJ then moved to the prestigious Xavier College on a scholarship and has spent the past two years there as a boarder.

“I couldn’t really imagine the journey it’s taken me on,” he said.

CJ always took a liking to sport in the refugee camp. He was obsessively kicking a soccer ball around and his athletic prowess has always been a standout.

“I just love running and kicking goals and winning really,” he said.

It is his drive to succeed that amazes CJ’s dad, Stephen Riek, who lived in the dangerous Ethiopian refugee camp for 14 years.

“I left South Sudan in 1998, just my wife and I. All my children were born there and then in 2007 I was given the opportunity to move to Australia,” he said.

“Definitely it was not easy to be in a refugee camp. I think you can’t fully understand the situation in the refugee camp.”

Mr Reike looked around the leafy expanses of Xavier College.

“It is totally different to where we are now because a lot of things are going on there [South Sudan] because there is no security and education is rare. So, it is not for children, even for adults it is hard for them,” he said.

“But it was not easy coming here to adapt to the culture [in Australia], So for my kid to be doing so well is very good.”

Mr Rieke said he would drive his son all around the state to play the game.

“Because I had six kids, it was not an easy job for me, so for CJ to reach this point gives so much happiness to me and my family,” he said.

“This is what a father should do, giving his children the opportunity to what they want to do and achieve their dreams.”

At Xavier College and the new Next Generation Academy where he trained at Hawthorn, he impressed playing half forward and the wing with his speed and ball use.

Xavier football director Lachlan Buszard said CJ could be one of the best players in the AFL.

“He could be sensational, he can play any position, it’s always speculative when you say how good he can be but from what I’ve seen here he’ll be up there amongst the best in the AFL,” Mr Buszard said.

“From an athletic point of view … he could be a very good player for a long period of time.

“He’s played a lot less than someone who’s grown up here but he’s worked really hard and it’s the things you don’t see, the work he puts in off the field.”