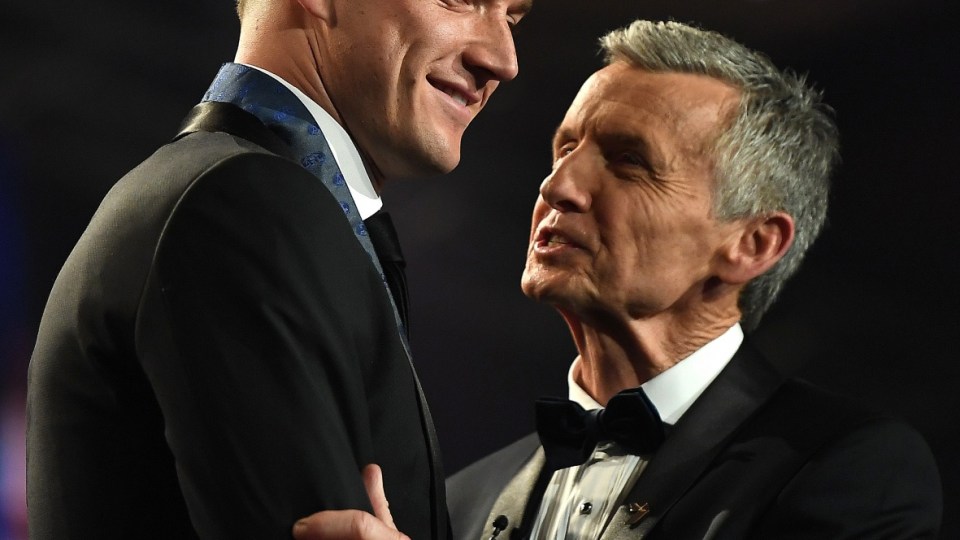 Bruce McAvaney (right) appeared to have a particular focus on medal winner Dustin Martin at the Brownlow. Photo: AAP

Dustin Martin has admitted he was spooked by the hovering presence of Seven host Bruce McAvaney during Monday night’s Brownlow Medal broadcast.

During Thursday’s episode of The Footy Show, Martin was asked about McAvaney’s bizarre behaviour towards him, which prompted social media commentary on the night.

“Now, during the Brownlow evening, Bruce, he became a bit spooky and a bit creepy,” host Sam Newman said.

“He was hanging on to you like a limpet,” he said to Martin.

“It gave me a bit of a fright,” the Richmond star admitted.

“He just popped up out of nowhere,” Martin said. “It was quite scary.

“To be honest I didn’t know what was going on.”

During the vote count at Monday’s ceremony, audiences reacted on social media when McAvaney targeted a visibly uncomfortable Martin.

The veteran commentator touched Martin repeatedly, held the back of his chair, popped up next to him at his table and leaned in close to his face at the Crown Casino event.

I think Dustin Martin will get a restraining order on Bruce Mcavaney by the end of the night.#Brownlow #dustinmartin #brucemcavaney #afl

Disappointed that Dustin Martin didn't give Bruce Mcavaney a don't argue as he walked off the stage just then. #Brownlow

So intense was the attention, Martin – who won the medal with a record 36 votes – admitted he would have given McAvaney a fend-off if he had been drinking at the event.

The Footy Show host Eddie McGuire joked Martin should have used his “don’t argue” response, mimicking the signature, stiff-arm gesture the footballer often uses against opponents on the football field.

“I probably would have [fended him off] if I was pissed, but I was sober that night,” Martin said, prompting howls of laughter and applause from the three hosts and the program’s live audience.

“I’m obviously not a big fan of the media,” the 26-year-old footballer said in his acceptance speech and interview with McAvaney at the AFL awards night.

“You want me to keep this short?” the commentator responded.

“If you can,” Martin replied.

AFL footy fans turned out in force on Friday in Melbourne’s CBD to catch a glimpse of Martin and other football players at the annual parade ahead of the grand final on Saturday.

What did Dusty think of Bruce's constant presence on Brownlow night? His response is gold! #9AFLFootyShow pic.twitter.com/SeMvegil6N