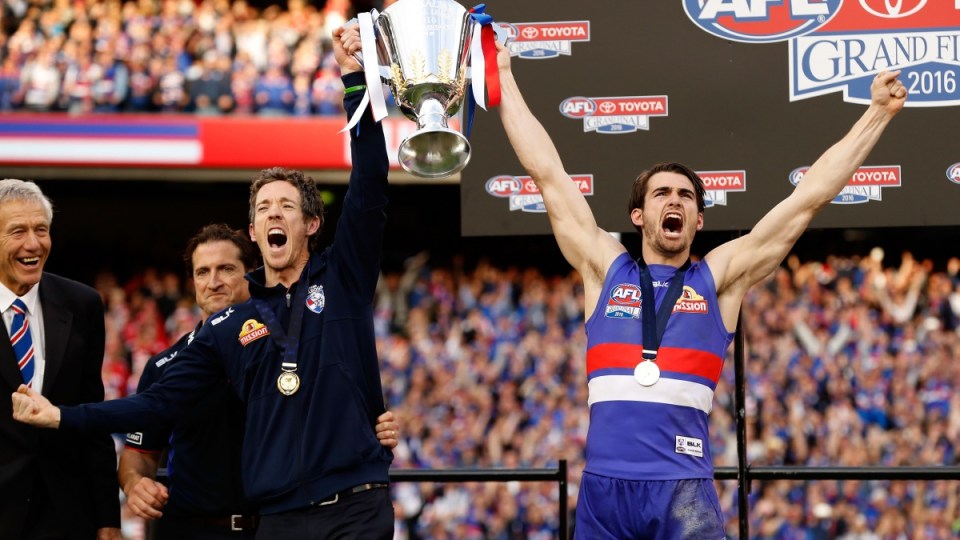 “They walk up to the bar and the rest of us just take a step to the left,” he said on the day he retired, lamenting the fact he never won one.

With Grand Final weekend upon us and the AFL and NRL preparing to accept a new intake of ‘premiership players’, it’s an interesting notion to consider.

Would Tony Lockett fumble around for his wallet to buy Mitch Morton a drink when he sees him?

(Morton, it must be said, was massive in the 2012 Grand Final and deserves every free beer the Swans shout him at the reunions – but Plugger he is not.)

Robbie Kearns is a Melbourne Storm great, who missed out on the 1999 premiership through injury.

A journeyman called Jaiman Lowe played in their 2012 triumph.

This is not to belittle messrs Morton, Lowe and Ablett – you don’t make it onto an AFL or NRL list without working like a demon and being very good at what you do.

Their status as premiership players is proof positive that on Grand Final day, everyone has their role to play.

In the NRL, the list of great players who never won a premiership is astounding: Andrew Ettingshausen, Paul Sironen, Trent Barrett, Ben Elias and even ‘King’ Wally Lewis all walked away from glittering careers without claiming a national premiership.

Lewis, of course, has an excuse – given he played most of his career before the Broncos were accepted into the NSWRL.

In the AFL, men like Brad Johnson, Nick Riewoldt, Matthew Richardson, Matthew Pavlich and Nathan Buckley all went without a flag.

They say timing is everything – just ask Nathan Hindmarsh.

Hindmarsh played 330 games for Parramatta, took them to the 2009 NRL Grand Final from eighth spot where they were beaten by Melbourne Storm – who were later stripped of the premiership for salary cap breaches.

Richie Vandenberg and Ben Dixon helped Hawthorn out of the wilderness years of the late 90s and early 2000s.

They retired at the end of 2007 and watched the 2008 Grand Final together, unsure whether to laugh or cry as the Hawks broke a 17-year premiership drought.

All victims of bad timing.

So what would you prefer: a glittering 10-15 year career, or a three-year career with added premiership?

Former St Kilda rover Nathan Burke played 323 games over 16 years, but the closest he got to a flag was losing to Adelaide in the 1997 Grand Final.

“I’m probably in the play the 15 years and have all those memories, rather than fly high for a short period of time and burn out very quickly,” Burke told The New Daily.

“I would much rather get there and lose it than not get there at all.

“Of course you’d love to have both – that’s the nirvana: you get the premierships and the long career.

“It amuses me sometimes when people say ‘we need a coach who’s played in a premiership’.

“I can tell you that if we had won the premiership in ’97, there would be players who would be called premiership players but have absolutely no idea how we got there … they were just part of a good team.”

Some players are great, and others are good men who get swept along in the slipstream of that greatness.

His professional playing career spanned 15 years, but his Balmain side went down in the NSWRL Grand Finals of 1988-89.

“I wouldn’t trade my career for a shorter one to win a premiership,” Jack told The New Daily.

“Premierships are the ultimate, but some players never play in a grand final because of injuries, form, wrong team.

“Ultimately it’s a journey that you are on with like-minded men.

“Some players get lucky and win a competition first year others like myself never won an NRL premiership.

“Sometimes in life it wasn’t meant to be, and that’s the way it is.”

One man who achieved Burke’s ‘nirvana’ was Robert DiPierdomenico – a five-time VFL premiership player with Hawthorn.

“The reason why you play footy, at any level, it’s about mateship and to win premierships – that’s what it’s all about,” he told The New Daily.

“To win one, it’s the best thing ever. To lose one, you just hurt for the rest of your life.”

Despite all his success, Dipper still remembers the pain of being told he would not be playing in the 1991 decider against West Coast.

“I had a lot of injuries in 1991, and the last six weeks of the season I’d built myself up to play in the Grand Final,” Dipper said.

“John Kennedy, myself and Peter Schwab were told to go train with the reserves.

“I was so angry – it just burnt me forever.”

Dipper too, understands the importance of luck and timing.

“Some guys get there only once, some guys never get there – you might be injured, wrong place, wrong time,” he said.

The NRL is a slightly different beast because State of Origin is considered an equal, or perhaps bigger, test of one’s mettle than the NRL.

But Wally Lewis, who was a State of Origin hero for Queensland, said winning a premiership is still the holy grail.

“Most of the players say that’s the ultimate goal – the most important achievement for a full-season challenge,” he told The New Daily.

“State of Origin’s very short and sharp, but the intensity and pressure attached at the highest level probably guarantees it has its own reward and glamour.

“But if I was around and a current day player, I’d love the chance to be playing in an NRL premiership.”

Recent retirees’ comments on what the lack of a premiership means to them have been enlightening.

Murphy said not winning a premiership left him with a “sense of emptiness” and described it as having a “bit of a hole in my heart”.

Riewoldt said he had beaten himself up over the lack of a premiership throughout his career, but was content because he could not have trained any harder or prepared himself any better for himself.

“In a lot of ways, you play the game to win an AFL premiership,” he said.

“But if that’s all that mattered to me, then the last 17 seasons and all the energy and effort that I’ve put into this place in creating a culture would be worth nothing.”

For the players of Adelaide and Richmond, North Queensland and Melbourne preparing to go into battle this week: seize the day, because you might not get there again.

For the beaten 22 who wake Sunday morning, and the vanquished 17 who rise on Monday – the journey, and life, goes on.

Finals 2017: AFL or NRL, there’s the agony and ecstasy of Grand Final dreams and downers