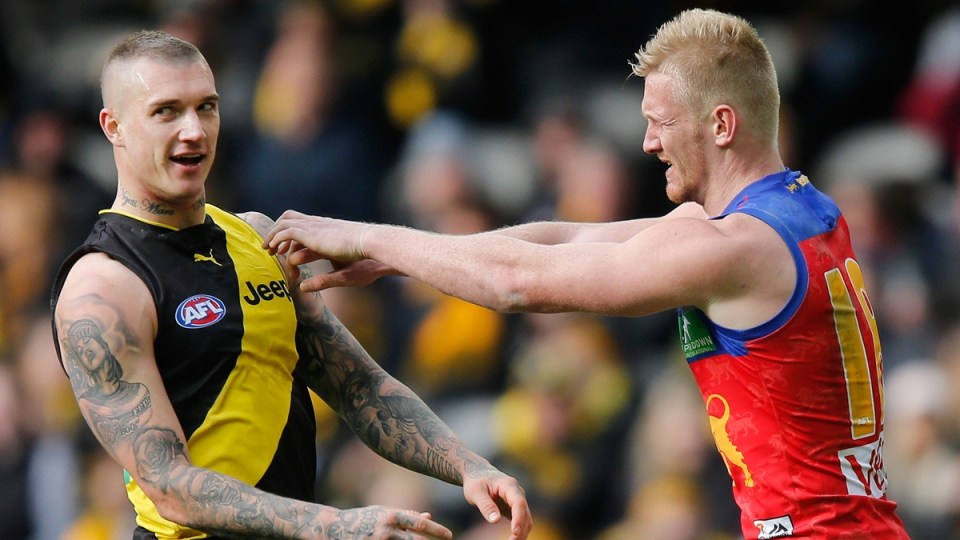 If Adelaide is to win its first premiership since 1998, stopping Tiger Dustin Martin is key.

It is impossible to take the newly minted Brownlow medallist completely out of the game, but negating him and his impact should be a high priority for Don Pyke’s Crows.

The problem for the Crows is they don’t have a natural tagger, but if I was in charge of Adelaide, I would have devised a plan that would see three of my midfielders spend 10 mins each quarter on Martin.

The instructions would be clear and simple: drive him crazy.

You don’t need talent to niggle, irritate or scrap – it is about desire and effort.

I watched with particular interest when Brisbane’s Nick Robertson got under Martin’s skin in Round 17.

It was the first time I had seen Martin lose his cool with an opponent and I must say, I’m surprised I haven’t seen it since.

Martin had 40 disposals and kicked two goals on that day, so perhaps opposition sides felt it wasn’t worth repeating.

But Martin was certainly pre-occupied with things other than winning the football on that day and it’s a tactic I would be using – at least in stages.

The beauty of Martin, for Richmond coach Damien Hardwick, is he can swing him forward if circumstance required.

And if a tag was applied, even if it was coming from three Crows players, a move forward might stop that tactic, such is Martin’s power and presence in the forward 50 arc.

So that’s another thing Pyke would have to think about.

Still, if the Crows can stop Martin, they go a long way towards winning the match. I don’t think they will.

Martin is a player who brings fans through the gates and his checkside goal in the last quarter against the Giants last week was quite simply amazing.

Hardwick will also be hopeful of an improved showing from Jack Riewoldt, who hasn’t been in great form.

If he can kick three or four goals, it will ease the burden on Richmond’s mosquito fleet of small forwards.

But one of the main reasons I think Richmond will win is Adelaide’s preparation for this match.

Both of the South Australian club’s finals have been easy kills at home and as a result, I am not sure they are ready for the intensity of Grand Final day.

While the scoreboard says the Tigers won their two finals comfortably, both Geelong and the GWS really pressed them for more than a half before Richmond kicked clear.

From my own finals experience, I know it doesn’t help to be going into big games on the back of massive – and unchallenging – victories.

I’d be really concerned by Adelaide’s preparation if I was a Crows fan because I can’t remember them playing really well at the MCG for quite a while.

Three games there this year have produced two narrow wins and a draw, against three sides who missed the finals – Hawthorn, Carlton and Collingwood.

Richmond is at its best on the MCG and can win, as long as the burden of home favouritism does not get to the players.

Hardwick’s pre-game address will need to be spot on. He does not want his team thinking, or worrying, about the crowd or the potential outcomes.

They need to be focused on playing in the moment, minute by minute, contest by contest.

Silly risks must be avoided early in grand finals and giving away stupid free-kicks is a cardinal sin.

Even if the Crows tag Martin, I still think the Tigers will be too good. But the Brownlow medallist is not my Norm Smith medallist.

Trent Cotchin will be best on ground as the Tigers finally break the drought.