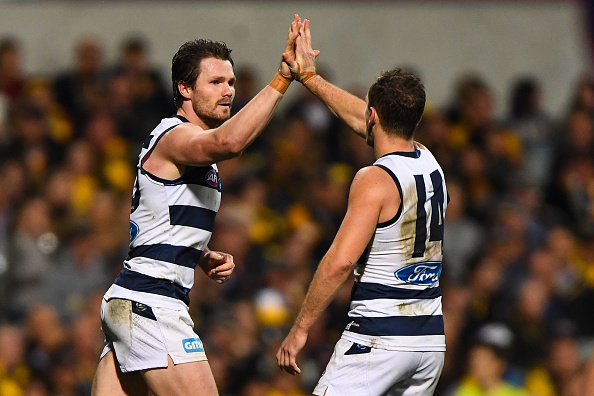 No matter which two teams remain standing after this weekend’s AFL preliminary finals, there’s no shortage of fairytale narratives to elevate the eventual premiers to legendary status.

Last year’s drought-breaking triumph by the Western Bulldogs was the perfect antidote for a competition forced to endure three worthy, but ultimately ho hum Hawthorn flags.

The Dogs’ fanfare was always going to be hard to top, but this year’s final four – Richmond, Greater Western Sydney, Adelaide and Geelong – all offer a backstory to excite not only the diehards, but neutral fans and footy historians.

Friday night’s Adelaide Oval match-up between Adelaide and Geelong offers all the intrigue of ex-Crow-turned-Cat Patrick Dangerfield meeting his former club on one of the game’s biggest stages.

Dangerfield has been a revelation since moving home to Geelong in 2016, and the debate about his starting role – either up forward or in the midfield – is providing much of the interest in the lead-up to the game.

‘Danger’ has been one of the keys to Chris Scott’s sometimes maligned, but clearly successful, rebuild of the dominant Cats. A fifth grand final in 10 years would be a towering achievement.

To add some extra spice, Cats fans are still filthy about the last time they met the Crows in a final – the 1997 semi-final when Leigh Colbert was denied a mark in the final quarter, allowing the Crows to go on and win their first flag.

Adelaide also has its own redemption story, not the least the way the club came together after the untimely 2015 death of coach Phil Walsh.

Then there’s Eddie Betts, the livewire forward who battled a troubled childhood, a gambling addiction and ultimate exile from Carlton by Mick Malthouse.

Since returning to his home state in 2014, Betts has become not only one of the most influential goalkickers in the game, but a South Australian cult figure.

The Tigers’ 37-year flag drought has been marked by so many false dawns that Richmond has become a by-word for flakey on-field behaviour and missed opportunities.

After years of replacing coaches at the first sign of failure, Damien Hardwick has been allowed the time to grow and mature in the job – albeit having to survive an internal club review and the usual Punt Road threats of boardroom coups.

That the 2017 Tigers have been able to weather Dustin Martin’s contract talks without dropping their bundle, speaks to a new maturity of both club and individuals. That Martin has committed to the Tigers on the eve of a likely Brownlow Medal win offers even more joy to Richmond fans as they dare to dream of a grand final week where they scoop all the medals on offer.

If skipper Trent Cotchin’s bullocking determination in the thrashing of Geelong is any guide to the team’s mindset, it may finally be Tiger time.

That, of course, depends on the purpose-built team of young draftees and solid veterans from the Giants, who on Saturday have a chance to make history, and the most of their draft concessions.

Last year the Giants came within a late kick of denying the Bulldogs their own piece of history, and although this season coach Leon Cameron has had to juggle injuries and poor form, the club is again in a preliminary final.

There’s plenty of young talent to make the Tigers pay, and the lure of one last trip to the big show for ex-Geelong veteran Steve Johnson would ensure any GWS grand final appearance would be remembered as an historic moment.

Whatever the results this weekend, 2017’s fantastic final four means that the AFL is assured of delivering a fairytale on grand final day.