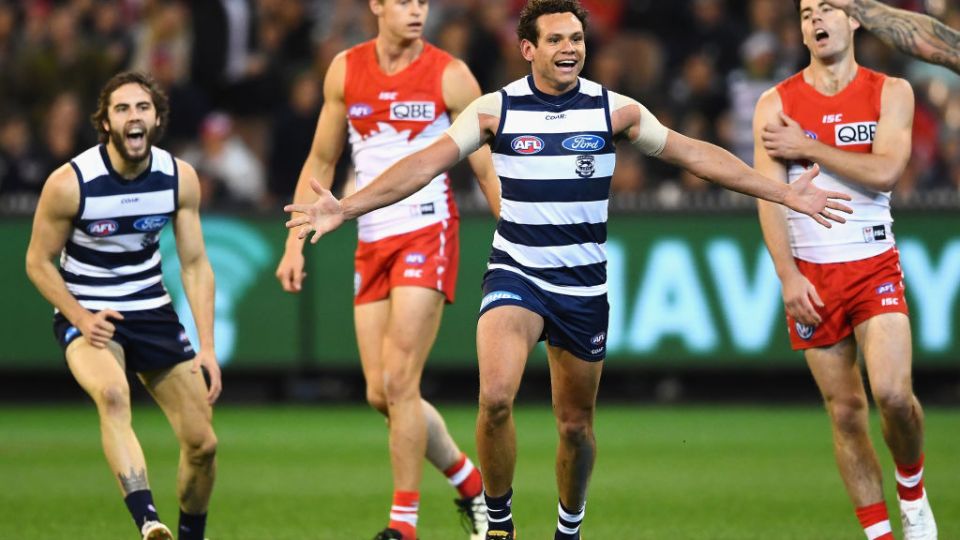 Steven Motlop of the Cats celebrates kicking a goal during the Second Semi Final. Photo: Getty

Geelong has brought Sydney’s incredible run — and the Swans’ season — to an abrupt end with a 59-point hammering at the MCG in the elimination semi-final on Friday night.

Geelong led for almost the entire night, cruising to a comprehensive victory.

The Cats were serious underdogs against Sydney, coming off a demoralising 51-point loss to Richmond on the same ground last week.

But from the opening bounce Chris Scott’s men looked fiercer at the ball, more focused in attack and cleaner with their skills on a wet night in Melbourne.

Sydney had had a boost before the game, when defender Tom Lonergan — who normally stands against Swans forward Lance Franklin — was ruled out due to food poisoning.

In the end, however, it did not matter. Harry Taylor went back and kept Franklin went goal-less, as the Swans were smashed all over the ground.

In much the same manner as Patrick Dangerfield uncharacteristically fumbled his way through the Cats’ qualifying final loss to Richmond, Franklin was his own worst enemy at times.

He didn’t get a kick in the first quarter. He gave away a goal with a 50m penalty in the second quarter and had just three touches and a behind at the main break.

With his side trailing by 36 points, Franklin willed his way into the contest early in the third, but the magic that usually flows so effortlessly from his boot deserted him. He conjured two shots at goal but missed both.

Even when Tom Stewart gifted a set shot from 35m out, the champion’s attempt sailed wide.

Geelong threw star midfielder Patrick Dangerfield deep into the forward line from the opening siren, and he responded with four goals to half-time, by which time the game was all but over.

A six goal to one second quarter was the catalyst for the Cats, who led by 36 points at the break.

They went on with it in the second half, and nothing the Swans did seemed to work.

Sydney had no multiple goalkickers, while Dangerfield had backup from Mitch Duncan and Sam Menegola who each kicked two majors.

Geelong will now travel to Adelaide Oval next weekend to face the Crows in a preliminary final.