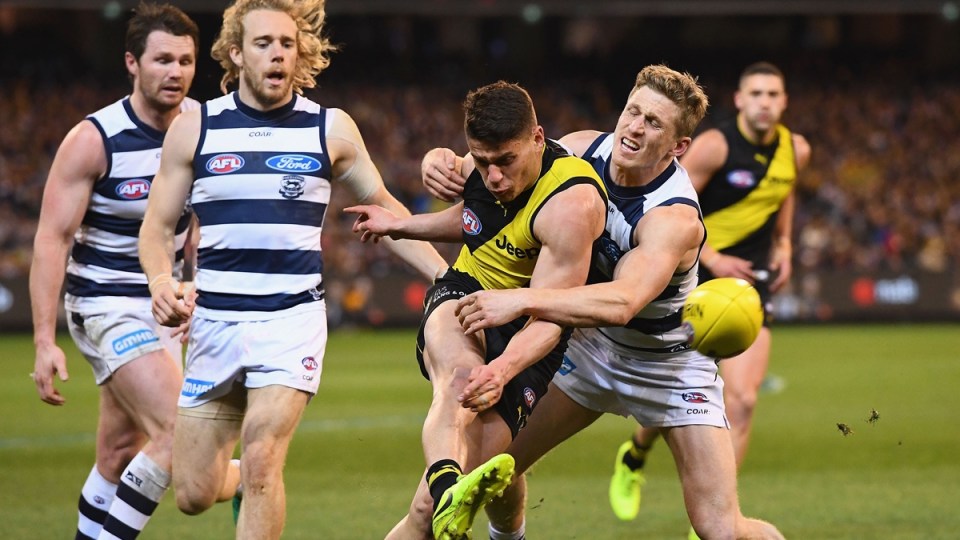 Geelong is one of the two most successful AFL clubs of the past decade.

The Cats won three flags in five years from 2007 to 2011, and have since finished second on the ladder at the end of the home-and-away season three further times.

However, regular-season success hasn’t translated to finals success in the six years since their last premiership.

A key factor is that, after fighting for 23 rounds to finish as high on the ladder as possible – theoretically to gain some advantage heading into the finals – Geelong is forced to give up its most significant advantage: playing at its home ground.

Simonds Stadium has been developed into a fortress by the players and into a first-class sporting and entertainment venue by the powerbrokers.

Yet, of the eight home finals the club has earned since 2012, only one has been played in Geelong.

How is it that the Cats are handicapped in their efforts to make the AFL Grand Final in a way no other team in the competition is?

And how is it that they can not only be forced to play away, but at the home ground of a team that finished below them, as happened in last week’s qualifying final against Richmond?

“I reckon Geelong has been shafted since the 90s, finals-wise,” former Cats champion Peter Riccardi told The New Daily.

Riccardi, a veteran of 288 games between 1992 and 2006, thinks the AFL does treat Geelong differently.

“We’re [seen as] just an extension of Melbourne, aren’t we?”

He said it was understandable if the AFL announced that it wanted to maximise finals attendances and revenue, but then that should apply across the board.

“If GWS finishes on top of Geelong, Geelong’s got to go to Spotless Stadium, [but] they’d get twice as many at the MCG,” he said.

“GWS playing West Coast: you play that game over in Perth they’d get capacity.”

“You open up a can of worms saying the only way Geelong’s going to get a home final is if they play the Giants,” he said.

Even if you accept that playing Richmond at the MCG was somehow acceptable, given that 60,000 more fans got to see the game, does that argument still hold water against an interstate team?

“They might get 45,000 people at the MCG this week,” Riccardi said of the Geelong-Sydney semi-final.

From the players’ perspective, Riccardi says they want to play as many games at Simonds Stadium as they can.

“We’ll play finals anywhere, but deep down you know we’re a five-goal better side at Simonds Stadium and we play this ground better than anyone,” he said.

It can’t do any more than create one of the premier venues in the competition and win more home-and-away matches than its opposition.

If it is then denied the opportunity to play at that ground for the football club’s biggest matches, there’s only one way to look at it.

Geelong is getting shafted.

AFL Finals 2017: How Geelong have been dudded by the AFL