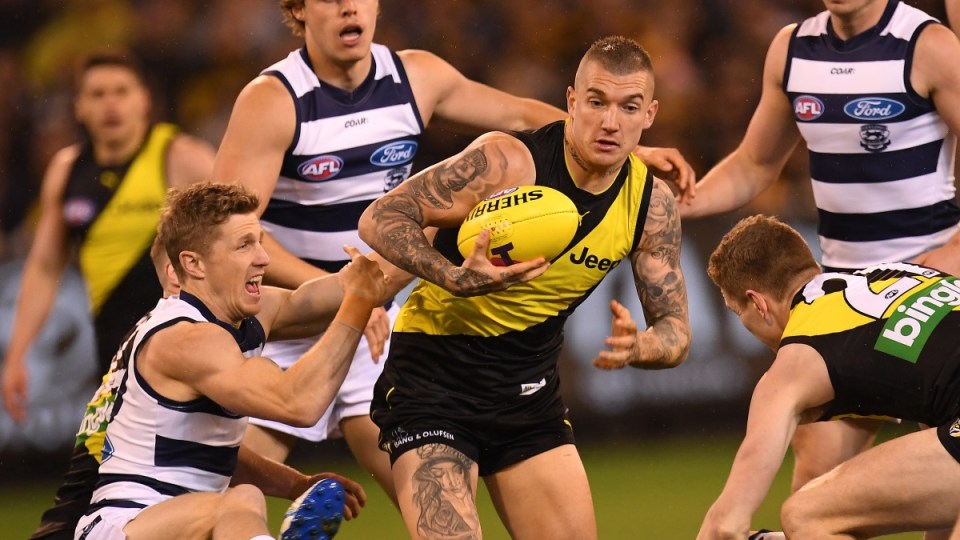 Worth every penny: Dustin Martin played a starring role in a famous Richmond win. Photo: AAP

Whatever Richmond are paying Dustin Martin, he’s worth it.

The Brownlow Medallist-in-waiting confirmed his position as the best player in the AFL in 10 dominant minutes either side of three-quarter time on Friday night.

Richmond might have been on top of Geelong in their qualifying final, but they always seemed susceptible to the experienced Cats.

That was until Martin stepped up.

Busting open the contest, he found Jack Riewoldt, who in turn kicked to Dion Prestia for an easy goal.

It was a confidence-boosting goal, sending the Tigers into the last break with a margin of 13.

Then came the game breaker.

Receiving the ball inside the 50m arc but running away from goal, Martin produced a stunning around-the-body kick to find Shaun Grigg in the goal square.

It was a ridiculous angle that seemed to take Geelong’s defenders by surprise – and would have gone through for a goal itself if Grigg wasn’t there.

When Grigg converted, the margin was 20 points, and Richmond’s rout was on.

How much did the Tigers decide to pay Martin over seven years?