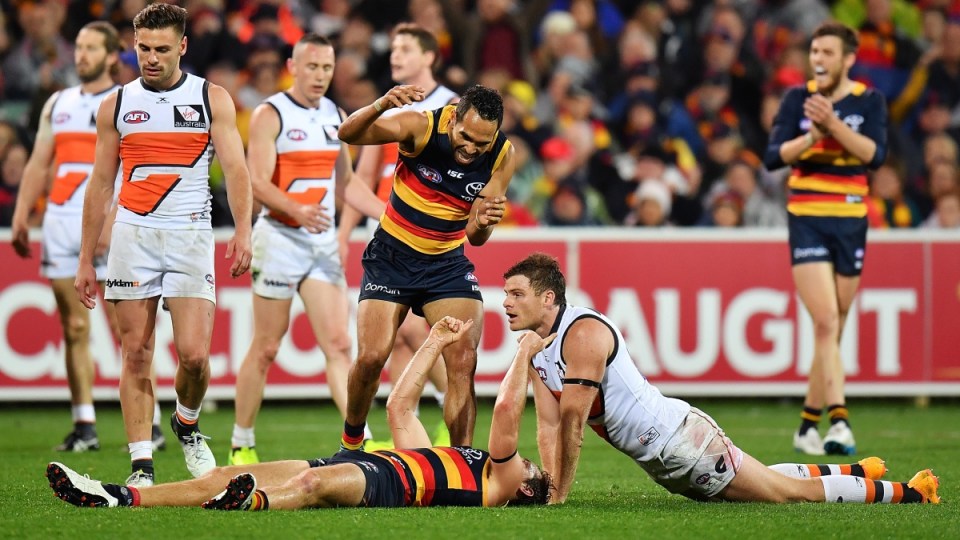 The Adelaide Crows celebrate another goal in their big win over GWS at the Adelaide Oval. Photo: Getty

Adelaide’s folk-hero also had a hand in three other goals as the Crows overcame the loss of defender Brodie Smith to what appeared to be a serious knee injury.

And the Giants’ grim night was compounded by another hamstring strain to key forward Jeremy Cameron – just weeks after he returned from the same injury.

Adelaide’s Smith started a rout, kicking the first goal against an off-key Giants outfit who are now pitched into cut-throat finals.

But Smith, just 12 minutes into the game, was carried from the field by trainers with a right knee problem.

The Crows made light of Smith’s absence in trouncing the Giants, who will host a semi-final against the winner of Saturday night’s elimination final between Port Adelaide and West Coast.

Betts had three goals and had crafted another two in a stunning opening half from the Crows which underlined their premiership favouritism.

After leading by 12 points at quarter-time, the Crows clicked into top gear in the second stanza, booting 5.3 to a lonely point from the Giants to hold a commanding 44-point half-time lead.

Adelaide’s Crouch brothers led a ferocious assault around the packs – Matt finished with 31 disposals and older sibling Brad collected 27 including 11 inside 50s.

But the only time the Giants gained any serious traction was a three-goal burst in the opening seven minutes of the third quarter to creep within 26 points.

The Crows, before 52,805 spectators, rapidly steadied with a trio of majors to kill off the challenge – they led by 43 points at the last change before closing out victory in a tame last term.