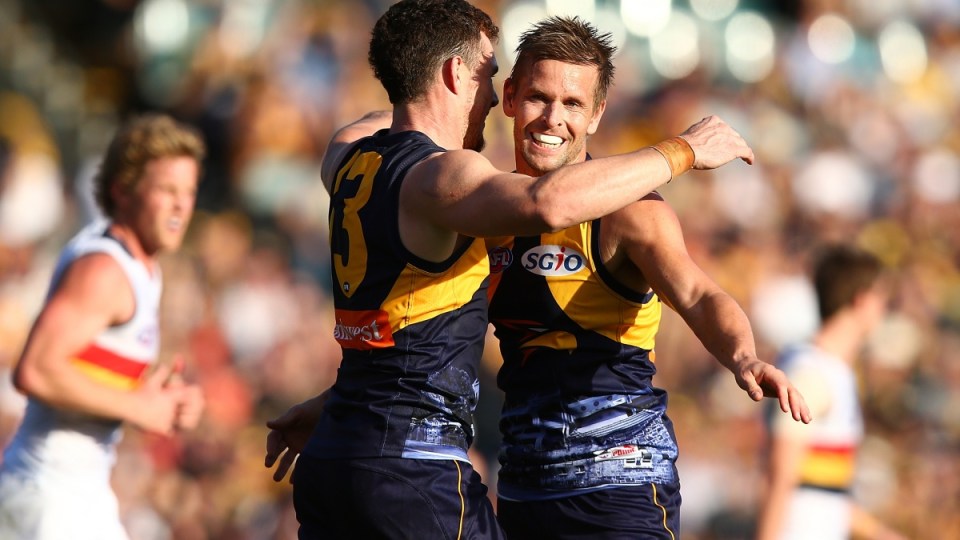 Eagles Mark LeCras (R) celebrates a goal with Luke Shuey in the win over the Adelaide Crows. Photo: Getty

West Coast have snatched eighth spot from Melbourne in the last five minutes of the AFL season, with the Demons paying dearly for their upset loss to Collingwood.

In the end, they missed out on their first finals appearance in 11 years by just .5 of a percentage point.

When Adelaide’s Charlie Cameron kicked a goal with just over five minutes left on Sunday at Domain Stadium, it meant the Eagles trailed Melbourne on percentage. But goals to Lewis Jetta and Jack Darling meant the Eagles dramatically charged into an away elimination final against Port Adelaide.

Round 23 was a tumultuous end to a home and away season that has been marked by upset results and unpredictability.

Indeed the Demons, who started this weekend in seventh spot, were nearly not the team sweating on how the last game at Domain Stadium panned out.

Essendon get a scare, before securing seventh place

Essendon started round 23 in eighth place and were warm favourites against Fremantle, who had lost their last two games by 104 points.

The Bombers had a comfortable lead early in the second half on Sunday afternoon at Etihad Stadium, before the Dockers’ five-goal run reduced the margin to just eight points.

Essendon then rallied with two late goals and the 16.11 (107) to 14.8 (92) win gave them their first finals appearance since 2014. They will play Sydney in an elimination final at the SCG. Had the Bombers lost, it would have been them making way for the Eagles.

Also on Sunday, Richmond cemented their top-four finish and the double chance with a convincing 41-point win over St Kilda at the MCG.

The 19.8 (122) to 12.9 (81) win, the last game for Saints great Nick Riewoldt, meant the Tigers finished third. That gives them a contentious “away” qualifying final against second-placed Geelong at the MCG, Richmond’s home ground.

The Cats had an outstanding 44-point win over GWS at Simonds Stadium on Saturday night and, by rights, should be hosting the Tigers at the same venue. But there is no way the AFL will play the game at the MCG, given the certainty of a crowd approaching 90,000, compared to the 36,000 capacity at Geelong.

It will also be the only Victorian match in week one of the finals. Adelaide will host GWS in the other qualifying final.

Gold Coast ended their dismal season with the club’s lowest score of 3.2 in their 115-point loss to Port Adelaide on Saturday night at Adelaide Oval.

Riewoldt is one of the biggest names in a stellar group of retirees this season.

Hawthorn’s nine-point win confirmed that the Bulldogs are the first reigning premiers since the Hawks in 2009 to miss the finals.