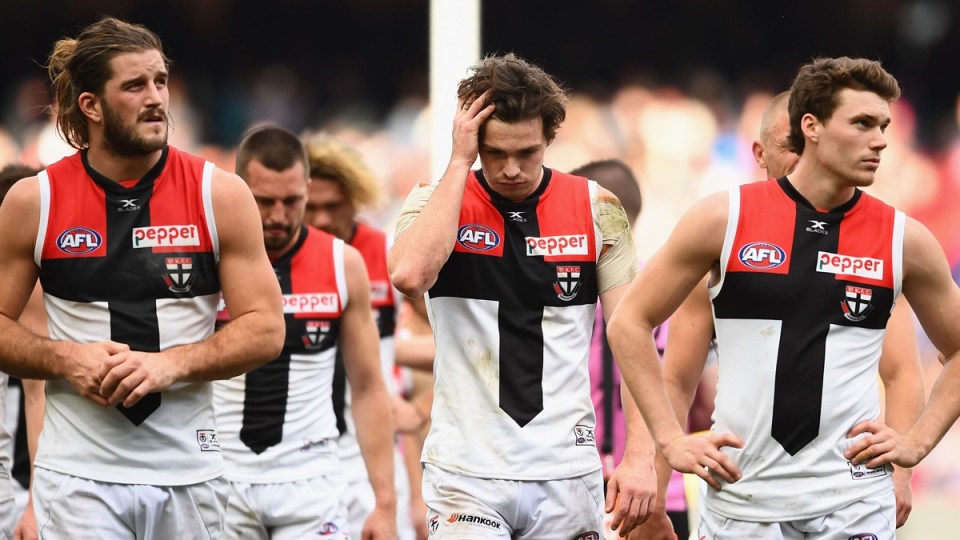 St Kilda are likely to just miss out on an AFL finals berth. Photo: Getty
analysis

Going into the final round of the 2017 season, 11 clubs can make the top eight.

But I can only see the order of the teams inside the eight changing – which means that West Coast, St Kilda and the Western Bulldogs will not play finals.

I think all three of those sides will lose in Round 23 and Essendon, currently eighth, will move to seventh after a big win over Fremantle.

Melbourne would then drop to eighth after losing a thriller to Collingwood, and the only other positional change I have is Geelong going above GWS and taking second position after beating the Giants.

That would throw up a fascinating set of finals in week one, including a clash between Sydney and Essendon after they played an absolute classic in Round 14.

The Bombers making the finals would be a fantastic story given what they have been through.

Their best football this year has been as good as anyone’s, and last year’s investment in Zach Merrett, Darcy Parish, Orazio Fantasia and Anthony McDonald-Tipungwuti − when so many of the club’s stars were serving doping bans − has helped the Bombers progress.

They’ve got a few injuries starting to pop up and, if they make it, will appreciate that week off.

We know finals are tougher matches, and more keenly contested than regular-season ones, and I’m not sure that will suit the Bombers as much. But in Joe Daniher, they have a player who can win games off his own boot.

For Melbourne, making the finals for the first time since 2006 would be seen as a significant achievement.

I can’t see them doing any damage. They appear to be making up the numbers. Still, they will benefit from the experience and can build on it next year.

The Eagles will be really disappointed with their season. They have been in winning positions and lost on several occasions and good sides just don’t do that. They have really struggled for consistency.

The side that will be kicking themselves the most, I believe, is St Kilda.

When they beat GWS playing a really exciting brand of football, everyone thought that this was their year to jump back into the top eight.

They will rue all summer that heartbreaking loss to Port Adelaide a couple of weeks ago. Those are the defeats that really eat away at players.

As for the reigning premiers, the Western Bulldogs, they just remind me so much of the Hawthorn team I was a part of in 2009.

Like the Dogs, we won a grand final with a young list in 2008, only to miss the top eight the next year.

When you are a young side that achieves the ultimate success, you expect that your team will just continue to improve. But it doesn’t always work like that.

Opposition sides put a lot of work into you, and last year they just had so many of their players in career-best form during the finals series.

They have struggled with continuity, particularly up forward, and the pressure will be on them in a big way next year.

The Bulldogs know they have to get back to that form in 2018 and I think that their hunger − which might have dipped fractionally this year − will return after watching other sides play finals.

It is hard to watch football in September when you know you should be involved.

Campbell Brown: This is who will make the AFL finals