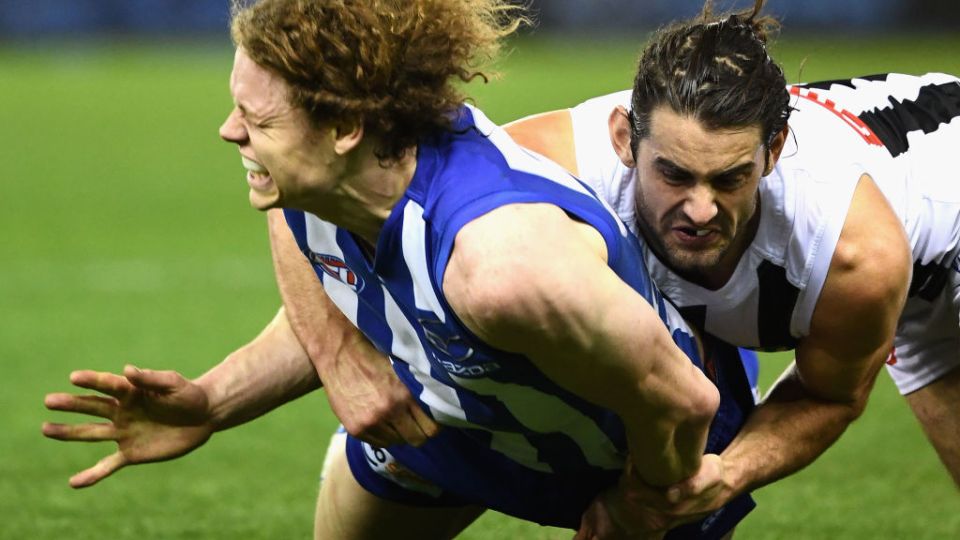 It is time for some clear clarification and guidelines from the AFL on tackles.

The current confusion is a recipe for disaster that leaves players unsure about how to attack the contest.

Things are so complicated that Collingwood coach Nathan Buckley described a tackle from Brodie Grundy that knocked out North Melbourne forward Ben Brown as “perfect”.

I’d take Nathan’s comments with a grain of salt, given Grundy is his player, but the tackle was fair and there was no malice in the incident.

Yet Grundy faces a two-match suspension if he accepts the AFL match review panel’s finding.

Brown was knocked unconscious because his head hit the hard surface at Docklands – but if he wasn’t injured, we simply wouldn’t be talking about it.

As usual, the outcome dictates the verdict and I’m not sure that’s the best system.

Players have been trained for years to pin both arms in the tackle and if they don’t, they risk their opponent being able to get a kick or handball away.

But if they pin both arms and their opponent gets hurt, they get suspended – for a fair tackle.

Unfortunately, players do get hurt when they play football. It is just part of the game.

I understand that a player being stretchered off is a bad look. But for those asking why Grundy tackled him so hard, that is how players tackle, and it looks a lot easier from the couch.

I’d hate to be a coach now, trying to teach my players which tackles are okay and telling them what they can and can’t do.

And I’m sure the players will be equally as confused.

I was amazed by Port Adelaide’s banner before Sunday’s Showdown.

Talk about giving your opponents ammunition!

I’ve never seen a banner win a game but I’m surprised that the Power sanctioned that.

It came back to bite them in a big way.

I watched a fair bit of footy on the weekend and the Tigers impressed me but Collingwood’s decision-making frustrated me greatly.

The Pies don’t play the percentages and have too many players who don’t know their limitations.

If I was Nathan Buckley I would be imposing some boundaries on players and telling them that if they disobey them, they’d be dragged, and if they kept doing it, they’d be dropped.

It’s all good and well ‘taking the game on’ but some of the decisions made against North Melbourne were terrible. And don’t forget that they won – comfortably.

As for Richmond, well the Tigers are taking the game on and doing it in an exciting manner.

Last season, they played a stop-start style and would get caught up going sidewards and backwards.

This year they are playing fast football and the little blokes in their forward line have been superb.

For the first time in a long time, Richmond is an exciting team to watch.

It’s a big tick to coach Damien Hardwick and I’m intrigued to see how that style stands up in September.

Elsewhere, GWS looked really good on Saturday in a strong showing given their recent form.

And I’m not prepared to write the Cats off, despite Joel Selwood’s injury.

There may be a few surprises yet in this funny old season.

Denis Pagan: The frustrating ‘recipe for disaster’ in the AFL