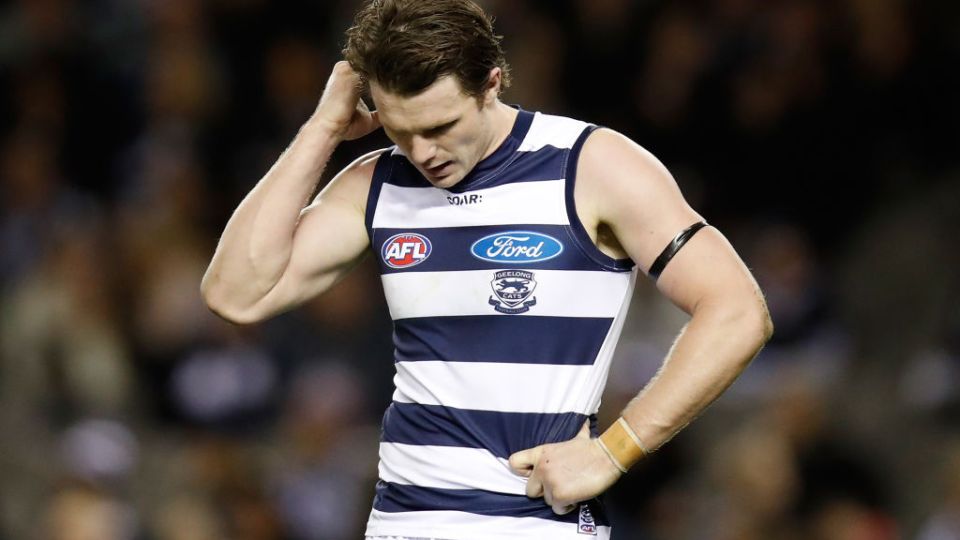 Patrick Dangerfield risks a two-match ban if he is unsuccessful in appealing the one-match sanction. Photo: Getty

Patrick Dangerfield’s hopes for a second consecutive Brownlow Medal have been dealt a serious blow after the match review panel (MRP) offered him a one-game ban for a dangerous tackle.

Dangerfield tackled Carlton’s Matthew Kreuzer, pinning his arms and dumping the ruckman head-first into the ground during the third quarter of Saturday night’s clash.

Kreuzer left the field concussed and did not return to the game.

Geelong and Dangerfield have until Tuesday afternoon to decide whether or not to challenge the ban.

If Dangerfield accepts the one-match ruling, he will be ineligible to win the 2017 Brownlow Medal, for which he remains the favourite.

However, if the Cats challenge the suspension at the tribunal, they risk it becoming a two-match ban.

Since the incident, much discussion had centred on whether Dangerfield would be suspended for the tackle, as the on-field umpire did not deem it a reportable offence at the time.

Kreuzer was ushered to the Carlton rooms and wasn’t sighted for the rest of the match as the Cats went on to win by 65 points, with the Blues later confirming Kreuzer suffered a concussion.

The Cats star had been joint favourite to become the first back-to-back Brownlow winner since St Kilda champion Robert Harvey did so in 1997 and 1998.

A bemused Dangerfield said he wasn’t aware of the furore surrounding the tackle until he was shown the footage after the game.

“I actually thought he still had the ball, so that’s why I’ve turned around and put my hands in the air,” Dangerfield told the Seven Network’s AFL Game Day.

“‘I haven’t been cited for anything. I felt it was a fair tackle.

“There was no umpire’s call at the time, so I don’t see an issue with it, but it’s not up to me.”

Meanwhile, Hawthorn star Luke Hodge has been offered a one-match ban for an incident in the game against the Sydney Swans on Friday.

Former teammate Lance Franklin was fined for an incident in the same match.