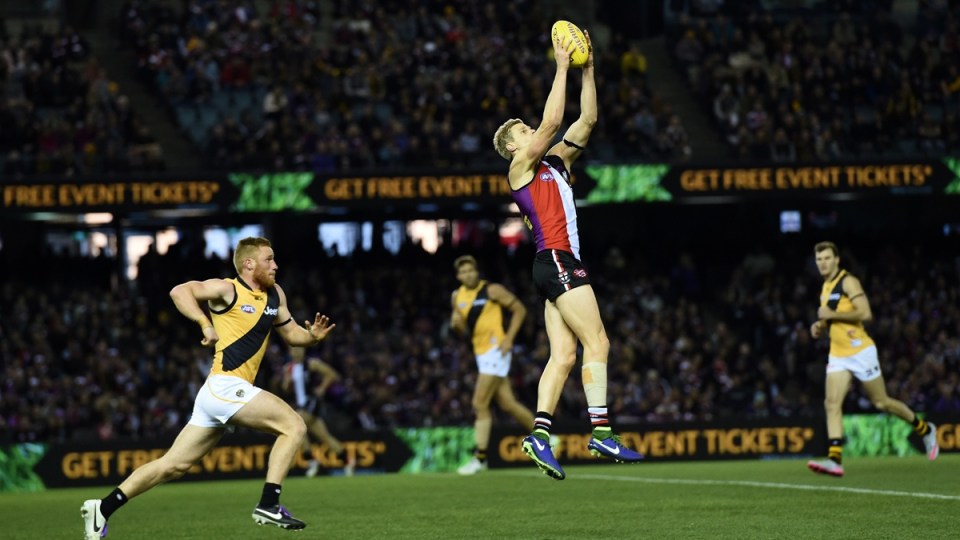 When your coach tells you that you have the job on star St Kilda forward Nick Riewoldt, you start to get nervous.

Then you go into negotiation mode.

Alastair Clarkson, my coach at Hawthorn, knew I wasn’t great aerobically and there was no way I could go with a man famed for his running power for an entire match.

We eventually settled on a plan: Riewoldt could collect marks and kicks up on the wing but I had to defend grimly inside St Kilda’s forward 50.

It worked a couple of times when I played on him, even if he took plenty of marks, but he carved Hawthorn to shreds one night, kicking five goals on a night where I got moved off him.

When I was playing on Nick, you’d come off the ground nearly physically sick.

His intense work-rate made him one of my toughest opponents.

Nick had everyone in the competition covered on the run and he knew it, going on long, surging leads of up to 80m in the first quarter of matches.

He did it deliberately, just to blow you up, knowing his opponent wouldn’t be able to keep up with him in the second half if they used up all their energy.

So often, when I was playing on him, you’re thinking ‘have a spell mate, let me get my breath back’.

He didn’t say a lot on the field but he certainly let me know when he was unhappy with my tactics.

And one thing he did say, annoyingly, was ‘here we go again’ before going on a long lead.

The thing that always impressed me about Nick’s running power was that he wasn’t a jog, jog, jog, then sprint sort of man – he sprinted from the start of his lead to the finish.

It meant that even if you were level with him when he started, he’d often be seven or eight metres in front of you when he marked the ball.

Sometimes on the vision, you weren’t even on the screen.

Of course, Nick is known for much more than just his running.

He was such a great mark – be it overhead or on the lead – and he was so courageous.

There's only one Nick Riewoldt 🙌 pic.twitter.com/EZ3EB7Zt8Y

It was unbelievable and showed a complete lack of self-regard and his amazing aerial power.

Throughout his career, I think his kicking for goal was scrutinised unfairly.

I reckon a lot of his misses in his early days were down to fatigue.

Technically, he has always been a good kick and it was very rare that he failed to convert in a big moment for the Saints.

He was that good we used to play two blokes on him at Hawthorn, with one minding space in front of him and Trent Croad or myself on him.

I have so much admiration for what Nick has achieved because of the battle he faced with his knees.

He’d swell right up after a game, have to get his knee drained, spend hours in the water at the bay during the week, hardly train and then play every week – and dominate.

The word is he’ll probably need a knee replacement not long after retiring and it’s a shame he won’t retire as a premiership player.

That whole group of players at St Kilda – Riewoldt, Nick Dal Santo, Lenny Hayes – probably should have won one.

But he will leave a real legacy at the Saints.

And I’m sure he’ll be inducted as a legend into the AFL’s Hall of Fame.

Campbell Brown: Why Nick Riewoldt was my toughest opponent