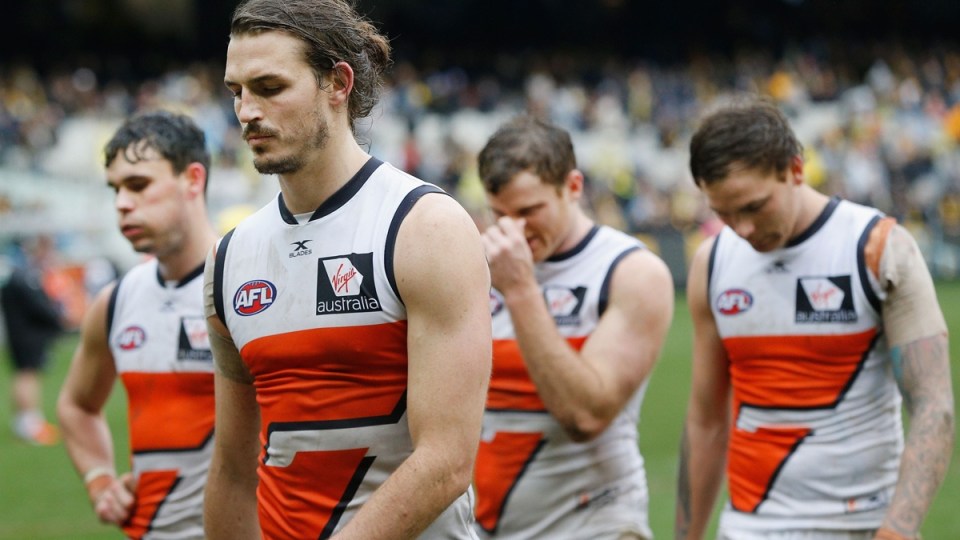 The Greater Western Sydney Giants clearly have a very healthy opinion of themselves.

It isn’t warranted, though, and that is proven by the fact they have won just one of their past six matches.

What they are doing now simply isn’t working.

They are playing wishy-washy football and it looks like they think they can turn it on when they want.

But by doing that, they seriously risk not fulfilling their potential and – despite being the pre-season favourites – are no guarantees to even make the finals.

I haven’t been impressed by a few things I’ve seen from the Giants this year.

And I’m not sure why club CEO David Matthews felt the need to criticise Paul Roos – a premiership coach – for his opinion, that he is paid to give.

Toby Greene’s discipline problem has not been handled well, either.

Greene, who was fined twice earlier this year, then got away with head-butting Sydney’s Isaac Heeney before he was eventually suspended for two matches for striking Caleb Daniel of the Western Bulldogs in Round 6.

On Monday, he accepted another two-week suspension for his jumper punch on Richmond’s Alex Rance.

I’d give him another one on top – from the club.

They have to send a message that it’s not on.

It’s nothing personal but Toby has had more than enough chances.

He’s got to learn a lesson. It’s a team game.

I thought GWS passed up a big chance to win it last year and they’ve fallen away in so many areas this year.

I think they thought it would just happen for them this year but the reality is that premierships are so, so hard to win.

So much has to go right for you.

I certainly wouldn’t have extended Leon Cameron’s contract, like the Giants did last week, until 2020.

What happens if his style doesn’t bring success?

It was a puzzling decision.

I reckon they’ve got away with their patchy form this year because of their injuries – and the fact the media coverage isn’t as intense on them in Sydney.

But this week, the whole footy world will be piling into the Giants. And rightly so.

The good news for the Giants is they can still play a big role in the finals.

They’ve got the talent and will get some good players like Jeremy Cameron and Brett Deledio back from injury.

They just need some tough love. And good leadership.

Another thing that’s worrying me is the talk surrounding Gary Ablett.

There’s a fair bit of scuttlebutt about his tight hamstring, which seems to play up when it suits.

I’m not sure his heart and soul is in it with the Gold Coast Suns.

Yes, he’s been an out and out champion of the game, but has he made Gold Coast better?

If he wants to go at the end of the season, I’d let him go.

If Greater Western Sydney want an example of how they can turn things around, they don’t need to look too far.

The way Sydney have bounced back from a 0-6 start, winning 10 of their past 11 games, has been nothing short of amazing.

The Swans really stand out to me as one of the sides to beat, along with Adelaide.

The Crows have been particularly good at home this year.

I’m intrigued to see how they perform in their three away matches before the season ends.

Because, the way things are going, Greater Western Sydney won’t be involved on that last Saturday in September.

The many problems facing the AFL’s pre-season favourites