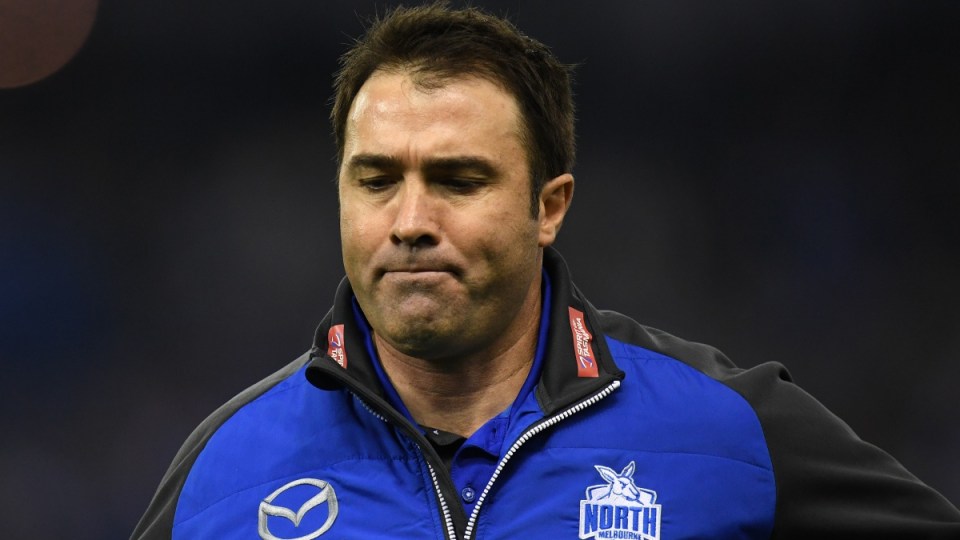 Workplace experts have slammed an AFL coach’s angry tirade at one of his players as “unacceptable”, and warned that aggressive behaviour by bosses is not confined to sport.

North Melbourne coach Brad Scott was filmed yelling and swearing into his phone at Majak Daw during Saturday’s game against Essendon. Some viewers thought the highly regarded coach went too far.

RMIT Professor of Management Pauline Stanton said it must be remembered that an AFL field is not only an entertainment venue, but also a workplace.

“This is not acceptable behaviour. It is not the kind of workplace we should be putting up with in the 21st century,” she told The New Daily.

“But it’s not confined to sport. There is a lot of bullying and abuse in other industries such as the hospitality, healthcare and emergency services industries.

“These kind of behaviours can lead to mental health problems, higher employee turnover and decreased engagement.”

Wouldn't want to be on the receiving end of this call from Brad Scott. #AFLDonsNorth pic.twitter.com/uRXY2vgUnp

Scott defended his behaviour at the post-game press conference.

“Majak showed some real signs at times but it was pretty obvious that I was disappointed with a few of Majak’s efforts. But he’s still learning the game,” he said.

“The challenge for him is still the technical nature of the game because it’s a bit incongruous that the strongest man ever to play the game at AFL level is getting pushed out of the way.

“Maj and I had a bit of a laugh about it after the game. We’re going to work with him on that and keep supporting him.”

Picked up part of what Brad Scott screamed at Majak on the bench, "happens one more time I'm coming down there!" #AFLDonsNorth

University of Queensland senior law lecturer Dr Paul Harpur, a former Paralympian who became the fastest blind man in the southern hemisphere at the 2006 Commonwealth Games, said just because “aggressive communications” are common in elite sport, it does not excuse them.

“It occurs on many construction sites, in the military, factories, trading floors, lawyers offices, between doctors to nurses and a wide range of other workplaces,” he told The New Daily.

“Harassment and bullying are prohibited in any Australian workplace.

“So technically a coach ranting at their players could be in breach of several workplace laws.”

Speaking from his experience as an athlete, he said that when a coach communicated in an aggressive manner it would prompt him to also react aggressively.

“That doesn’t benefit anybody or the sport,” he said.

RMIT’s Professor Stanton said there was evidence that men were more likely to put up with these kinds of behaviours and less likely to speak out.

“It’s a good thing that this was captured on camera and has received immediate public scrutiny, especially given that in recent months, AFL coaches and players have been speaking out about mental health.”

Professor Stanton advised any employees who felt they were being unfairly treated in their workplace to contact the relevant agencies or beyondblue.

“You shouldn’t feel as though you need to accept this kind of behaviour,” she said.

“You need to speak to someone. Don’t suffer alone.”