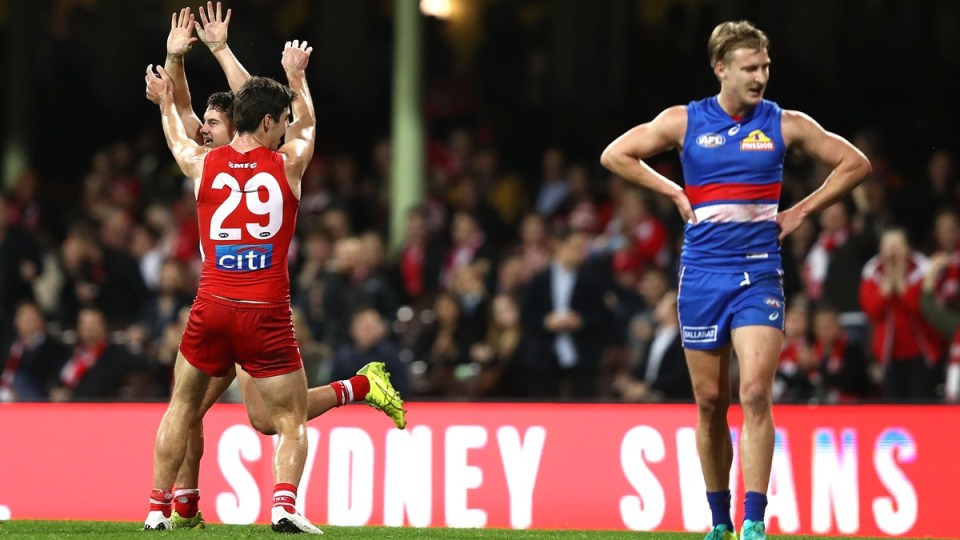 Now is the time for some home truths at the Western Bulldogs.

The reigning premiers are not hard enough at the ball and the figures don’t lie.

After 12 rounds last year, the Bulldogs were the best in the competition at contested football, winning the count by an average of 16.5 possessions per match.

This year, they are 12th, losing the count by an average of one each week.

At the same point in 2016, they were first for clearances and fourth for scores from clearances. Now? The Doggies are 16th and 13th, respectively.

They are also averaging just 81 points per game.

Those numbers say a lot about the problems at the Bulldogs.

They have no real strength this year and they simply aren’t scoring enough.

It is a misconception that the Bulldogs were battling through the first half of last season.

And at the moment, 2017 looks like being a wasted year for the Bulldogs.

They have got the talent. Geez, they were good last year. As a footy fan, they really excited me.

I didn’t want to miss a Bulldogs game just to see their ferocious attack on the ball.

And the good news for the Bulldogs is that the AFL season is not over yet.

But if I was in Luke Beveridge’s position, there are three things I would do immediately.

This week, I’d be sitting down with the players in front of a whiteboard and asking them a series of questions.

How are we being viewed currently? How do we want to be viewed?

How will we rectify our form? And what were you doing in 2016 that you aren’t doing now?

Hopefully the group comes up with the right answers themselves.

2) Ramp up the aggression at training

The Bulldogs have got to train as they want to play.

And that means ruthless attack at the ball – even if it is against team-mates.

Sure, there’s a risk of blokes getting injured, but it’s all aimed at improving the approach and attitude of the players.

Beveridge has made plenty of changes to his side through the year and, on the surface, it seemed a good move to keep players on their toes.

But a strategy like that also brings about a lot of uncertainty and it has made no impact on this occasion.

Now Beveridge needs to pick his best side and stick with the group for three or four weeks.

He can tell the players that the side isn’t changing and they can play without fear of getting dropped the next week.

Winning a premiership is such a wonderful achievement but it is so tough to go back-to-back, as I experienced.

I thought they were over the top after winning the preliminary final last year and that that may come back to bite them on grand final day, but I was proven wrong.

I was fascinated with Tom Liberatore’s movements in the off-season and it looks like they have become comfortable.

The last two weeks for the Bulldogs have been simply terrible.

They need to support Jason Johannisen better, who is now getting targeted by opposition sides.

Maybe Beveridge could start him at half-forward or on the ball just to mix things up, but they need him up and firing.

I don’t think the contract discussion surrounding him has helped, either.

One thing is for sure: the Bulldogs are now feeling the blowtorch of the footy world.

The way they respond will be fascinating.