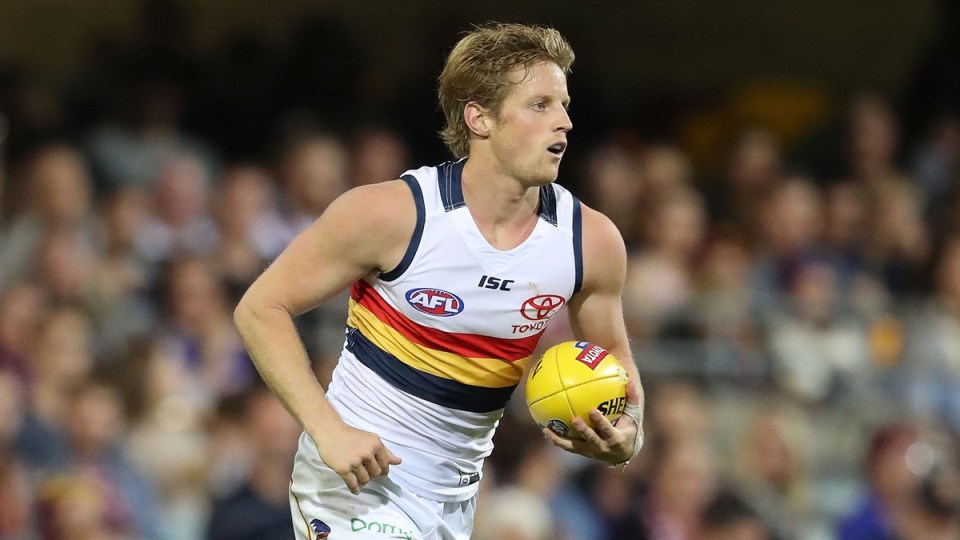 Adelaide star Rory Sloane is one of the Brownlow Medal favourites. Photo: Getty

We’re halfway through the footy season and it is an incredibly even one.

Even now, making predictions is tough – but I still think Greater Western Sydney and the Western Bulldogs will play off in the grand final.

This is what I think the ladder will look like once the regular season is done.

1st – Greater Western Sydney (pre-season prediction: 1st)
The most talented group in the competition. Sometimes I worry that coach Leon Cameron isn’t hard enough on his players but they are great to watch.

2nd – Western Bulldogs (pre-season prediction: 2nd)
Maybe they’ve had a bit of a ‘premiership hangover’ but they won’t be far off. Love the way they play and really like how the coach has been tough on selection.

4th – Richmond (pre-season prediction: 15th)
Credit to the Tigers, they have really surprised me. I said before the season started I wanted them to play a faster brand. They have, and it’s working well.

5th – Geelong (pre-season prediction: 6th)
I want to see them play away from home to judge how good they are. Joel Selwood and Patrick Dangerfield have been absolutely superb.

6th – Port Adelaide (pre-season prediction: 14th)
They have been really good. Sam Powell-Pepper is still my tip for the Rising Star – he is a find.

7th – Melbourne (pre-season prediction: 8th)
When they’re good, they’re fantastic. But the inconsistency worries me a bit. I’d love to see them train – often inconsistent results come about because of inconsistent training.

8th – West Coast (pre-season prediction: 4th)
I don’t rate their form at the moment but with the home games they have left, I still think they’ll make it. Need Josh Kennedy back soon.

9th – Sydney (pre-season prediction: 3rd)
They’ll come home strong but a slow start – and 0-6 is certainly that – takes its toll. Capable but will just miss out.

10th – St Kilda (pre-season prediction: 9th)
The great teasers. Every time I think they’ll be special, they fall over. Probably lacking a bit of midfield class.

11th – North Melbourne (pre-season prediction: 11th)
Like Melbourne, North’s best footy has been very good. Still worried about their lack of zip in the middle.

12th – Essendon (pre-season prediction: 12th)
Consistently inconsistent. When Joe Daniher fires up, they look really good. But they need Jobe Watson back to his best to make the finals.

13th – Collingwood (pre-season prediction: 13th)
Like the way they’re playing now, using it quicker and going through the corridor. The losses of Elliott, Wells and Goldsack will really hurt, though.

14th – Fremantle (pre-season prediction: 16th)
I’m not fooled by the ladder, where the Dockers sit eighth. Expecting a drop off.

15th – Gold Coast (pre-season prediction: 7th)
The big disappointment for me. They had a good win on the weekend, but aren’t doing enough.

16th – Hawthorn (pre-season prediction: 10th)
Remind me of the old heavyweight boxer, who thinks they have one big fight left in them. Occasionally they get up for it, but they can’t do it all the time. Games the kids are getting will help.

17th – Carlton (pre-season prediction: 18th)
Still too reliant on Marc Murphy, Bryce Gibbs and Kade Simpson. I like Jacob Weitering, too, but their current ladder placing is about right.

18th – Brisbane (pre-season prediction: 17th)
I just feel sorry for them. Players are walking out regularly. Maybe they need some assistance from the AFL.

Where your AFL team will finish the 2017 season