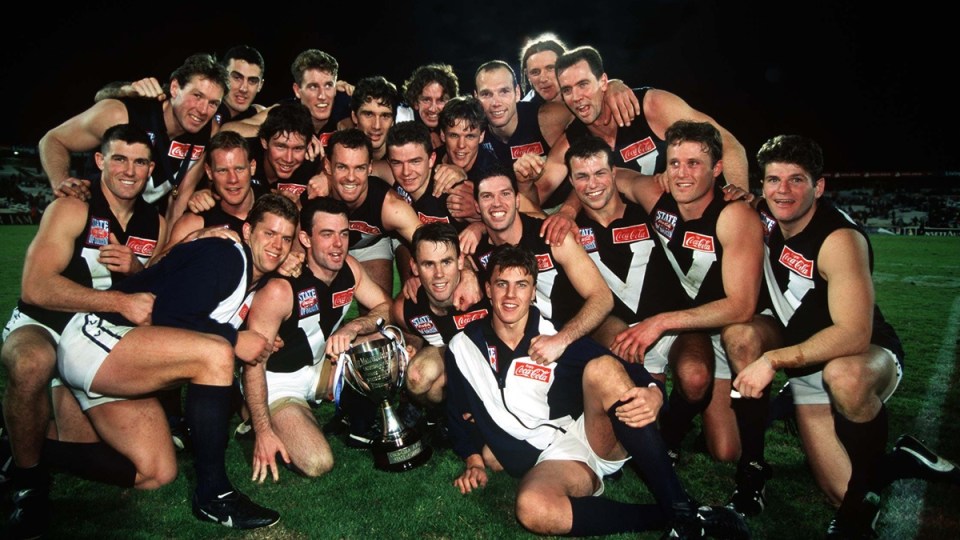 I dreamed of playing State of Origin football as a kid.

I first met the legendary Ted Whitten, who was a great mate of my father, Mal, when I was little.

They had a brilliant friendship based around of State of Origin football through the 70s, 80s and 90s, so you could say I was brought up with it.

Even though I was born in Western Australia, I moved to Victoria at the age of nine and always wanted to play for them, like so many greats before me.

This was much to my old man’s disgust.

Unfortunately, the AFL pulled the pin on State of Origin footy in 1999, when I was just 15.

I thought I’d never get the chance to play for Victoria but in 2008, that changed.

The AFL commissioned a game between Victoria and the All-Stars [players from all the other states] to commemorate 150 years of football.

The league called players to see if they would be interested in playing and it was a call I was delighted to get.

The AFL got an overwhelming ‘yes’ from the players and it was a simply brilliant week.

I got the chance to know, train and socialise with champions from other clubs who I never would have got an opportunity to know otherwise.

I certainly took plenty of advice and knowledge from our coaches, Mark ‘Bomber’ Thompson and Kevin Sheedy, and getting led out by captain Jonathan Brown was a huge thrill.

He was so committed to represent the Big V he went against the demands of his then-coach at Brisbane, Leigh Matthews, and played despite carrying a tight hamstring.

It is that sort of dedication that could re-ignite the debate to play state games.

Unfortunately, I feel most players would put their club above their state in this day and age – and that’s why the concept will never compare with the NRL’s State of Origin.

The 2008 game itself was a very free-flowing, highly skilled affair.

There weren’t taggers or a great deal of defensive pressure, like you would see in a normal AFL game.

It was more of a showcase of skill like you see in the NBA All-Star game until the last quarter, when scores were close.

I definitely felt the edge in the match then as both sides were desperate to walk off the MCG as winners.

That is why my goal on the run to put the Big V in front with 10 minutes to go remains one of my favourite football moments.

I’ve seen first hand that clubs aren’t that willing to let their stars play, but I would love to see State of Origin return to the AFL world.

Even if it was only every four years, it would give the current day players the chance to represent their state.

It could become an annual event if it was played in the week off between round 23 and the start of the finals.

Under that proposal, all players who are finals bound would be ruled out – but it would give all the other players in the competition something to strive towards late in the year.

Clubs wouldn’t be so worried about players getting injured and it could turn that week into a real festival of football, which would also contain the Brownlow Medal, All-Australian selection, the EJ Whitten match and the AFLW clash.

Staging the game after Round 23 would mean many of the competition’s stars miss out but until the AFL makes State of Origin a priority, it seems the most practical way.

As it stands, players are missing out on a great opportunity to play for their state.