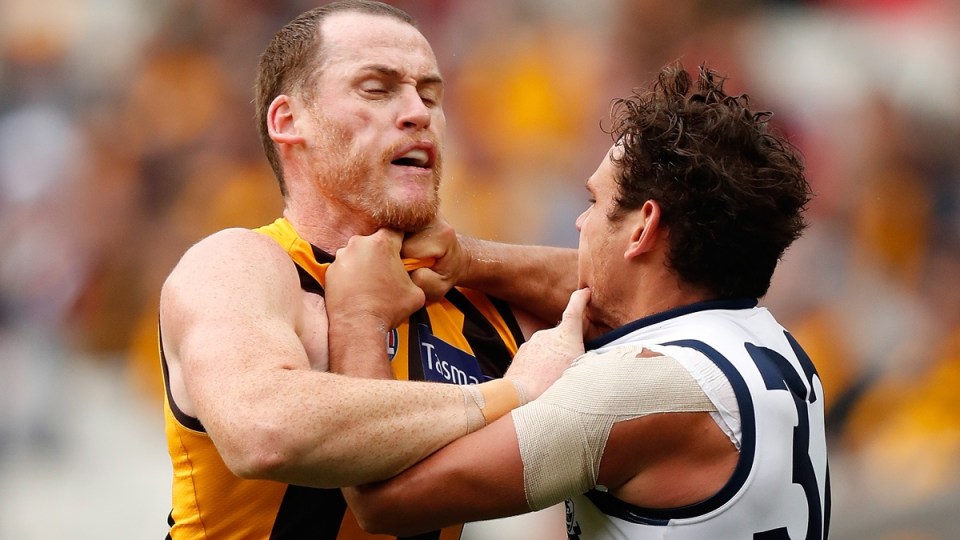 Jumper punches are a hot topic in the footy world. Photo: Getty

AFL chief executive Gillon McLachlan is open to a rules crackdown on jumper punching, saying punches of any sort have no place in the game.

The spiteful first half of Sunday’s North Melbourne-Melbourne clash has sparked considerable debate about jumper punches, which were used liberally in a series of spotfires.

McLachlan was wary on Monday afternoon about passing comment, given the match review panel was still assessing the weekend’s matches.

But he said any form of one player punching another should be rubbed out.

“To the extent that our rules don’t provide for it, we look to change them.

“I don’t like players punching other players, regardless of where it is.”

McLachlan was asked if Richmond captain Trent Cotchin was fortunate to escape with a fine last week for his jumper punch incident.

“Many would count Trent lucky – I need to respect the tribunal and not comment,” he answered.

Kangaroos coach Brad Scott said post-match that it should be up to the umpires, not the match review panel, to crack down on jumper punches.

Scott said if the umpires paid free kicks against the practice, coaches would quickly order their players to stop.

Asked whether it should be left to the umpires, McLachlan replied: “Generally, umpires, if they see something in any form, whether it’s jumper punching or holding the ball – if in doubt, pay the free kick.”

MRP member and former Geelong star Jimmy Bartel said earlier on Monday that he would like the tribunal system’s table of offences reviewed.

“It would be great if you had something called football acts and non-football acts,” he said.

“By that I mean when you’re trying to execute a football act and something goes wrong, like we talk about sling tackles and shepherding and spoiling, it’s graded in a certain way.

“Things like punching are not a part of our game.”

But he added as long as the MRP is consistent on jumper punches, then players know where they stand.

He noted the situation is far removed from 20 years ago, when players were kind-hit behind play.

“It’s not that you want the jumper punches and little niggle to go away,” he said.

Punches are not the look we want: AFL boss