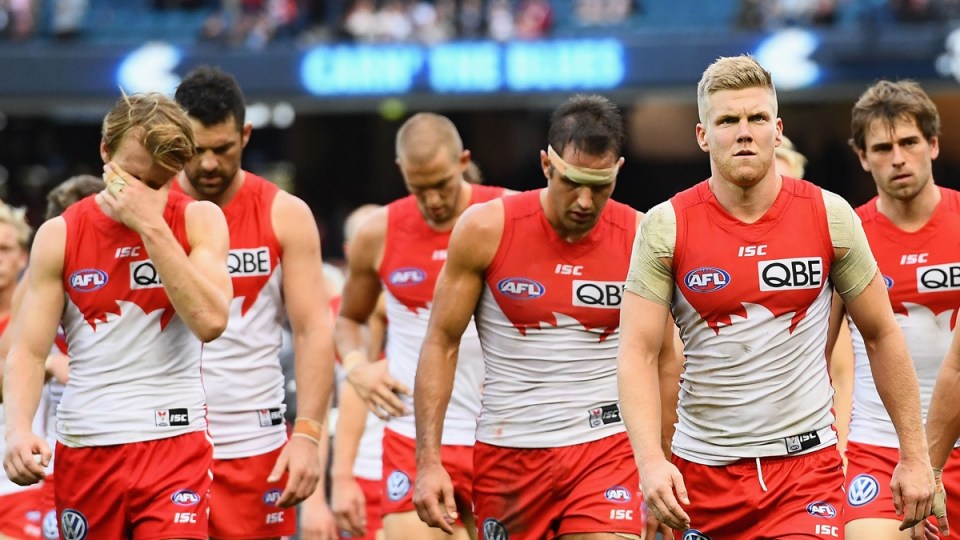 Sydney have not won in 2017. Photo: Getty
analysis

Football can be a pretty simple game, and Adelaide and Richmond – both undefeated until they met on Sunday – are showing the way.

Both sides get it inside 50 quickly and kick the ball long to more 50-50 contests.

That gives their forwards, both tall and small, the best possible chance, and doesn’t allow opposition sides to push extra numbers into defence.

When the ball comes in quickly, defenders panic, and that is why it is so frustrating to watch so many sides persist with chipping the ball around and going sideways and backwards. It baffles me.

Richmond played that way last year but have changed their game style and are reaping the rewards.

Several other sides, including Hawthorn, are taking too long to get the ball forward and for me, it really is the biggest mystery in modern footy.

The Crows just look superb with their quick ball movement and that is one of the reasons they are kicking big scores and are on top of the ladder.

Port Adelaide are playing faster this year, too, and they have improved.

Two of my old players, John Longmire and Alastair Clarkson, are currently in totally foreign territory as coaches of Sydney and Hawthorn respectively.

There are plenty of premiership players still playing in both sides and I reckon they just need to rekindle the enthusiasm in their playing group.

Sometimes players get lost in the importance of footy and forget why they started playing in the first place, which was to play with your mates, kick goals and have fun.

Both sides look devoid of confidence but that can come back with a couple of wins.

I remember in 1995, when I was coaching North Melbourne, and our boys were short on confidence.

We made the preliminary final in 1994, but, by Round 17, had already lost seven matches – including three in a row on two occasions.

Melbourne weren’t that good in 1995 but knocked us off by 22 points and I knew something needed to change.

I decided I’d play a bit of a trick on the boys that I thought would lift the mood and perhaps Clarkson or Longmire – who were both on the North list in 1995 – could do something similar.

First, I told the boys after we lost on Saturday to bring their mouthguards on Monday and that the ‘gloves were off’.

Then, on Monday, I got everyone in a bus.

I can still picture them sitting in their Ansett Cup jumpers – with mouthguards in – and there was a lot of nervous chatter.

We were headed for a gym in Flemington, or so they thought, when I stopped the bus at the Sydney Liars Club and pulled $100 out of my sock.

I told the boys we were going in for a few beers and the pressure was lifted immediately.

We had a chat, a few drinks and a few laughs and then trained hard during the week before going out to beat reigning premiers West Coast.

If it didn’t work, I would have looked like a fool, but things needed changing.

Bring the tagger back

If you ask me, only three – maybe four sides at a push if you include Port Adelaide – can win the flag this year.

The Crows are the frontrunners but GWS and the Bulldogs aren’t far off.

I’m prepared to give Richmond another chance, too, but Geelong rely too much on Patrick Dangerfield and Joel Selwood.

Selwood was tagged by Levi Greenwood on Sunday and didn’t have much impact.

Some people say a tagger impacts team defence too much. I’m afraid that is absolute dribble.

Taggers should be used a lot more – even Sam Mitchell struggled when he got one a few weeks ago.

And I reckon we’ll see a couple more this weekend.

Denis Pagan coached 344 games of AFL football with North Melbourne and Carlton, winning two premierships with the Kangaroos in 1996 and 1999.

‘It baffles me and is the biggest mystery in modern football’