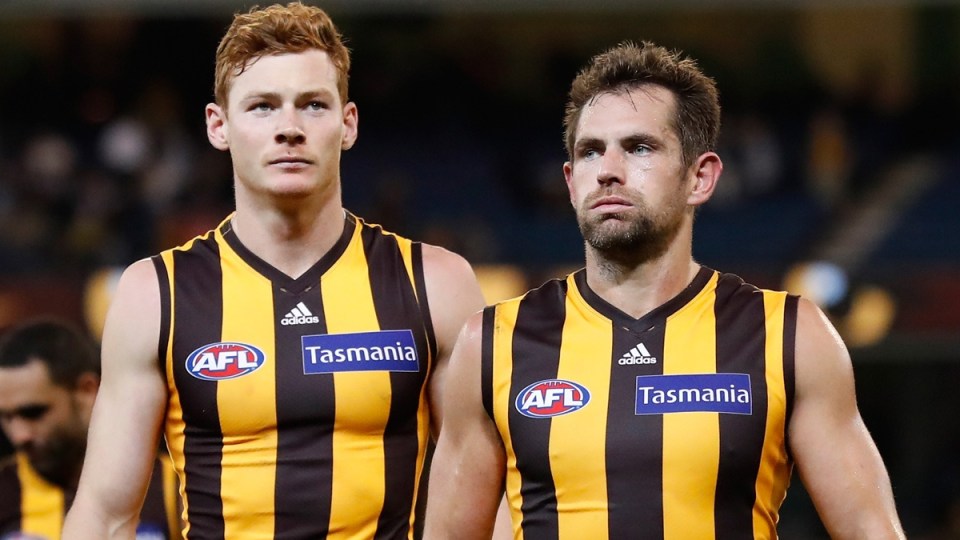 I must admit that I didn’t see Hawthorn’s fall from grace coming so quickly.

Yes, they are an ageing side and yes, coach Alastair Clarkson made some bold moves with their list in the off-season.

But their performance in the first month of 2017 has surprised everyone.

So what’s going wrong? In team sport, synergy is so important and when things go badly, it is often overlooked.

But that’s what Hawthorn are lacking and there is a disconnect between players that we have never seen in a Clarkson-coached side before.

That lack of synergy comes when players are new to a team, unfamiliar with a structure and unsure of the capabilities of their teammates.

In the Easter Monday debacle, nine of the 22 Hawks who featured did not play in last year’s semi-final loss to the Western Bulldogs. That is significant.

They have also lost an enormous amount of intellectual property, with five members of their coaching staff leaving for senior AFL jobs in recent years.

The biggest question in football right now is can Hawthorn turn things around – and how do they do it?

The simple answer is yes, they can, but they need to focus on three key areas.

Crucial in Hawthorn’s next phase will be their young players.

Clarkson needs to find out which of the kids on his list can make it at AFL level.

Monday’s team contained plenty of youngsters, like Ryan Burton, Kaiden Brand, Blake Hardwick and Tim O’Brien, and although the result was painful for the Hawks, those involved will learn.

I expect to see Kade Stewart, Teia Miles and Kurt Heatherley – who have all had a limited taste of senior football – get more games in 2017, and Dallas Willsmore make his debut.

Crisis creates opportunity. Burton has already won a NAB Rising Star nomination and has shown he will be a key position player for the next decade.

2) Keep the faith with senior players

Some of Hawthorn’s more experienced players have not started the season well, but it’s only Round 4 and they have consistently performed for over a decade.

I remember in my last year at Hawthorn, in 2010, we started the year with one win from our first seven matches.

But we worked our way out of it and made finals. It can be done.

Hawthorn’s skill level is very poor at the moment and that is a direct result of that lack of synergy.

Josh Gibson and Cyril Rioli, who are a couple of Hawthorn’s best kicks, can’t hit a target at the moment, while Jack Gunston’s goal kicking has been poor. Even Shaun Burgoyne’s decision-making has been off.

But while the Hawks should continue to give games to their younger players, they can’t panic at the selection table and drop their best players.

Hawthorn haven’t been great in this area for a number of years now.

They got away with it in the past because they were so good in other areas but that isn’t the case anymore.

If you ask me, the contested ball numbers this year have been quite damning.

Hawthorn have the inside players to be far better than that.

Liam Shiels, Will Langford, Tom Mitchell and Jaeger O’Meara are all good at finding the football. Contested ball simply has to become more of a priority than it currently is.

If Hawthorn can address these areas, they will be fine.

Clarkson is the greatest coach of the modern era.

In his 12 years in charge, he has found a way to reinvent his team on three or four occasions.

I have absolutely no doubt he will be able to do it again.

Campbell Brown: How I would fix the issues at Hawthorn