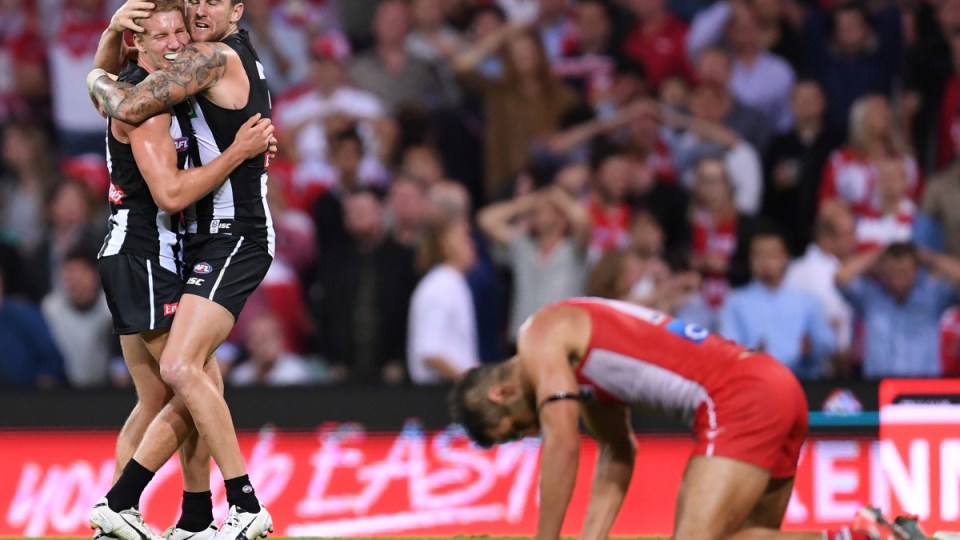 Collingwood crashed Lance Franklin’s milestone game and held on for a thrilling one-point AFL win over Sydney on Friday night.

Will Hoskin-Elliott kicked a superb long-distance set shot from a tight angle deep in the final quarter after Swans captain Josh Kennedy gave Sydney their only lead of the night with a behind.

Last season’s minor premiers have started 2017 with three-straight losses while Collingwood notched up their first win of the campaign.

Collingwood scored the first 21 points and led by that margin at quarter time and were nine up at the long break and three-quarter time.

Playing his 250th game, Franklin kicked just three behinds but tallied 18 touches and seven marks. He almost set up a win for his side by setting up their last two goals to first-season players Oliver Florent and Nic Newman.

Collingwood were good value for their win leading for almost the entire contest.

Incredibly, Collingwood had the first 15 inside 50s and finished the first quarter with a whopping 23-2 advantage in that area.

The quarter-time stats would have made horrendous reading for Swans coach John Longmire.

Sydney fought back to the extent they had more scores on the board by halftime but still trailed as Collingwood kicked straighter.

Swans youngster Will Hayward and veteran Kieren Jack each kicked two goals in the second quarter but five of their teammates only logged a behind as the hosts squandered opportunities to make even bigger inroads into the visitors’ lead.

Hayward finished with three goals but Collingwood’s defenders combined superbly to limit Franklin and Sam Reid to just one goal between them.

Adams finished with 31 possessions and Treloar 28 for the Pies while Jake Lloyd had 34 possessions, Josh Kennedy 32 and Dan Hannebery 31 for the Swans.

Collingwood coach Nathan Buckley would have liked to have seen his side get more reward for their periods of dominance.

“You can’t get anything from the first two weeks back, but it’s lot better feeling when you are on that side of the ledger,” Buckley said.

“We had to fight pretty hard for it.

Swans’ coach John Longmire rued his team’s tardy start more than any mistakes down the stretch.

“We were a bit rushed and not as composed as we should have in that first quarter and we just tried to play on a little bit too much,” Longmire said.

“We were under the pump and it was costly.