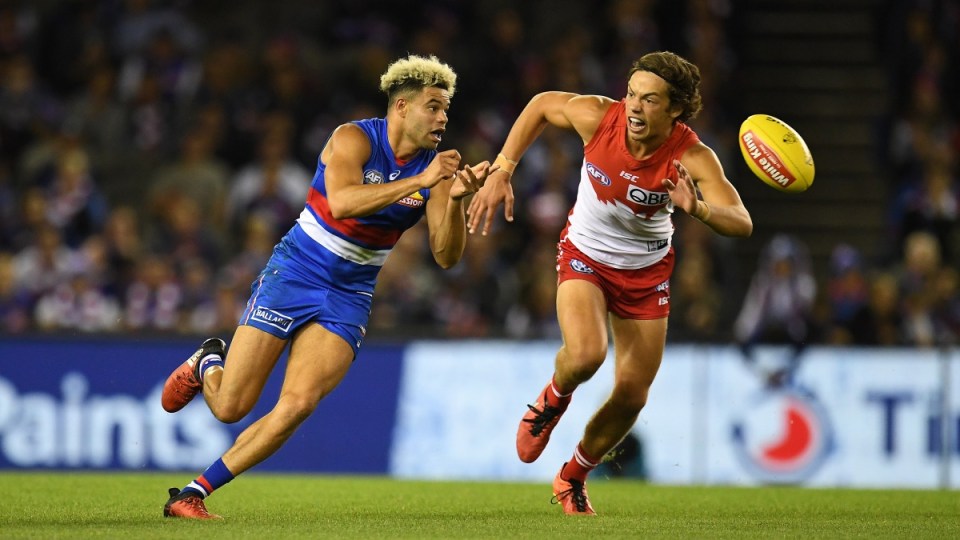 The Dogs' Jason Johannisen in action during Round 2 of the AFL season. Photo: AAP

The Western Bulldogs have denied the Sydney Swans their grand final revenge, downing them by 23 points in a gripping grand final replay.

The Swans trailed by 22 points at three-quarter time but stole the lead halfway through the final term after Lance Franklin booted three goals in 10 minutes.

But some late heroics from Marcus Bontempelli and a contentious goal to Liam Picken paved the way for the reigning premiers to claim a remarkable 16.14 (110) to 13.9 (87) victory at Etihad Stadium on Friday night.

With the Bulldogs up by four points late in the final term, Picken was awarded a free kick directly in front of goal after Sydney’s Callum Mills was pinged for a rushed behind.

Replays suggested Mills was within his rights to punch the ball through because he was in the goal square.

Bulldogs coach Luke Beveridge admits he is unclear around the interpretation of the deliberate rushed behind rule. https://t.co/aqlG3DiGEk

Sydney must also contend with another injury to Kurt Tippett, who limped off halfway through the first quarter. He landed awkwardly on his left ankle during a marking contest and was later seen on crutches.

Sydney flew out of the gates with the first four goals, three booted by big man Sam Reid.

He finished with six and was the chief beneficiary of a dominant start by the Sydney midfield, who led the clearances 14-3 at the first break.

Everything was going the Swans’ way until Zak Jones collected Travis Cloke with a head-high bump, gifting the Bulldogs their first goal.

Jones is almost certain to be suspended for the challenge, which resulted in a 50-metre penalty and an easy goal for Cloke.

The Bulldogs seized the momentum in the second term and led by eight points at halftime.

Franklin was brilliant late, kicking outstanding goals either side of three-quarter time but it wasn’t quite enough.

Bulldogs coach Luke Beveridge described the duel between Bontempelli and Franklin as “colossal” and lauded his side’s ability to withstand the Swans’ fourth-quarter onslaught.

“It was a great effort to arrest that momentum because the Swans were flying at that point in time.

“It was a strange one. We don’t often sit on our hands but there was a fair bit of trust in the boys and what they’re capable of doing.”

“Coming off last week, we were really keen for our blokes to make an impact around the contest and get their hands on the ball first,” he said.

“We had a really young team in tonight and so the way they went about it for the majority of the game, our boys, I was really happy with.

“To lose Kurt in the first quarter but then keep going as long and hard as we did in that last term, and having young kids in their first game play 105 minutes, 110 minutes … I thought the intensity and effort was pretty good.”