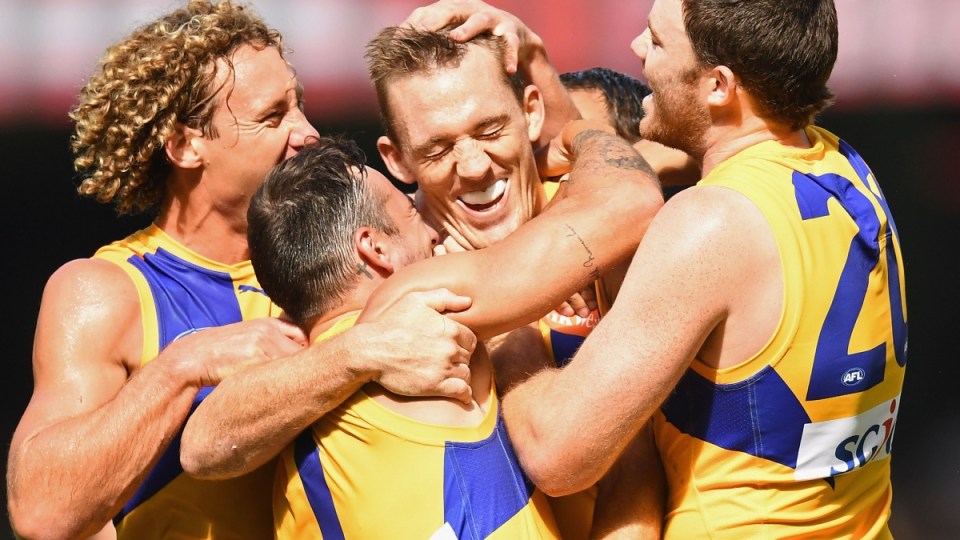 Former Kangaroo Drew Petrie is mobbed by Eagles teammates after kicking his first goal for his new club. Photo: Getty

But the season-opening victory has left the Eagles’ thin ruck stocks even further depleted, with veteran recruit Drew Petrie set to miss several weeks after fracturing his hand.

A hampered Petrie played out the game after receiving treatment in the Eagles’ rooms but coach Adam Simpson confirmed the 34-year-old would require surgery.

It is awful timing for West Coast, who are already having to do without superstar Nic Naitanui (ACL) for the season and back-up ruckman Scott Lycett (shoulder) for up to 10 weeks. 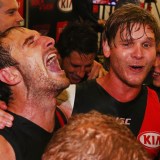 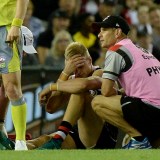 The injury put a dampener on what was otherwise an encouraging win on the road, led by Kennedy’s sharpshooting brilliance.

Three of his majors came during a dominant third quarter as the Eagles shook off a slow start against their new-look opponents.

North took full advantage of Petrie and Vardy each heading to the bench in the early minutes, with Todd Goldstein dominant against an improvised ruck rotation of Jack Darling and Jeremy McGovern.

The Kangaroos, who lost 1500 games of experience with the off-season departure of several key veterans, led by nine points at the first break and impressed with their speed and pressure.

Kennedy’s imposing performance shows he is every chance of becoming the first player since Geelong legend Gary Ablett Sr to top the AFL’s goalkicking tally for a third straight year.

There was plenty to like for the Eagles, with a best-on-ground performance from Elliot Yeo (26 touches, two goals), suggesting he may be ready to live up to his considerable potential.

Star recruit Sam Mitchell – the oldest player to ever line up for West Coast, after his shock trade from Hawthorn – was also impressive for his new side.

The 34-year-old racked up 38 touches and looks set to make a big impact on an Eagles side firmly within their premiership window.

Meanwhile, Adelaide have shown they are a force to be reckoned with this season, conquering premiership favourites Greater Western Sydney by 56 points.

Rory Laird was busy and creative for the home side with 42 disposals while Matt Crouch (29 disposals), Rory Atkins (three goals) and Charlie Cameron (23 disposals and two goals) contributed strongly.

Eddie Betts kicked four goals for the Crows while key forward Josh Jenkins booted three goals, including a long-range bomb after the half-time siren, in an important performance in the absence of captain Taylor Walker – who was a late withdrawal because of hamstring tightness.

Tom Scully (24 possessions and two goals) and Josh Kelly (27 disposals) ran hard for the Giants while key forward Jeremy Cameron (four goals) made his mark on the scoreboard.

The ‘Dangerwood’ aura lives on, but Geelong had plenty of other things to smile about in their spiteful 42-point thumping of Fremantle at Domain Stadium.

Drew Petrie injured as Eagles down Roos in AFL