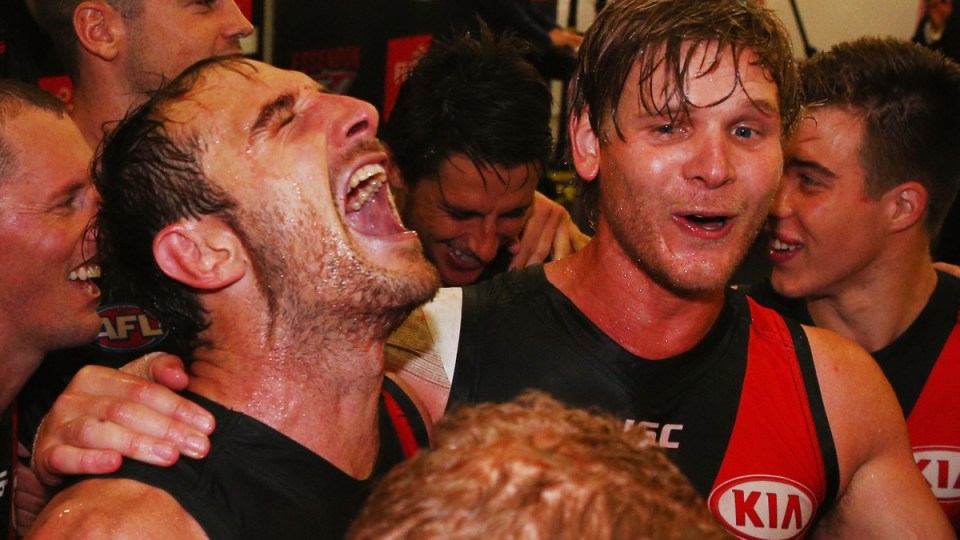 After two years of hell, Jobe Watson is back. Photo: Getty

Essendon have pulled off a fairytale AFL comeback, snatching a pulsating 25-point upset win over Hawthorn at the MCG.

Bolstered by the return of six players from doping bans, the Bombers trailed at halftime on Saturday night but surged home with five straight goals in a dominant third quarter to pave the way for a memorable win.

Reigning best-and-fairest Zach Merrett was outstanding in the midfield with 37 disposals, while crafty small forward Orazio Fantasia led the goalscoring tally with four majors in the 17.14 (116) to 12.19 (91) triumph.

The thrilling opening-round triumph in front of 78,294 vocal fans shows that the Bombers will be a force to be reckoned with this year after claiming the wooden spoon in 2016.

And the club made no secret of the emotion surrounding their return, handing out 18,000 commemorative “Comeback Story” shirts to create a sea of red and black in the members’ section of the MCG.

The roar that greeted the players as they ran onto the ground was only topped when Watson, one of Windy Hill’s most beloved sons, took his first mark on the wing in the opening minutes.

And the Bombers responded with an electric start, with goals to Fantasia, Hooker and Joe Daniher handing them a 13-point lead at the first break.

Hawthorn had their own comeback story with skipper Jarryd Roughead making his first regular season appearance since being declared cancer-free.

But if the emotion of his return was driving the Hawks – who lined up without any of Luke Hodge, Sam Mitchell or Jordan Lewis for the first time since round 10, 2002 – it wasn’t evident from their sluggish first quarter.

The Bombers looked by far the more dangerous side with their speed and willingness to attack through the corridor, led by Merrett and young partner Darcy Parish.

Hawthorn kicked into gear in the second term, driven by star recruit Tom Mitchell whose performance at the coalface showed what an important player he will be for his new side.

Mitchell (37 touches) led the Hawks to an eight point lead at halftime, and it appeared the Bombers were running out of steam.
But Essendon sprung back to life, booting five goals in quick succession to lead by 10 points at the final break.

Goals to Roughead and Paul Puopolo kept the Hawks in the hunt but Heppell (34 touches, three goals) booted two of his own to put the unlikeliest of upsets beyond doubt.