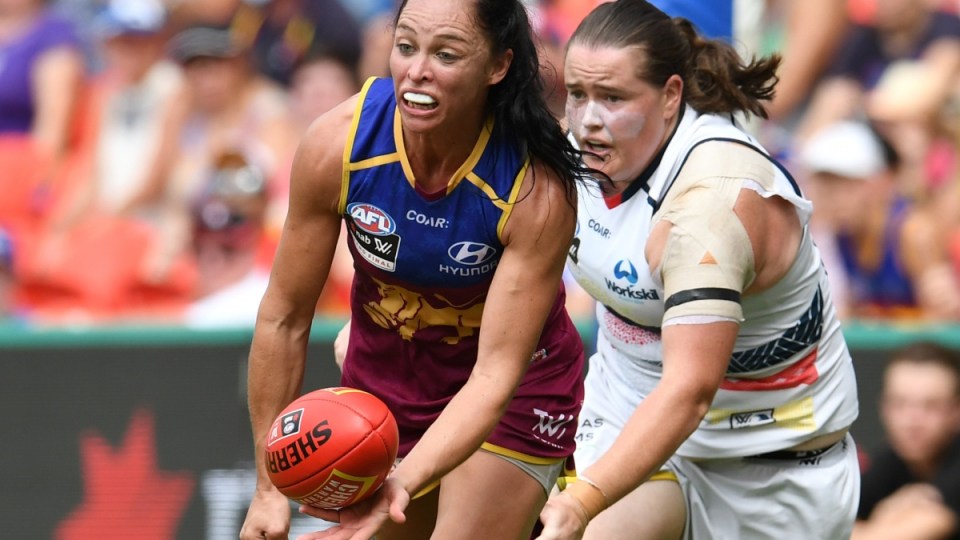 Kaslar and Perkins compete for the ball during the inaugural AFLW grand final. Photo: AAP.

Adelaide have claimed the inaugural AFL Women’s premiership, defeating a fast-finishing Brisbane by six points in a thrilling grand final on Saturday.

The Crows, led by co-captain Erin Phillips, secured the flag with a 4.11 (35) to 4.5 (29) win over the previously undefeated Lions in front of a crowd of 15,610 at Metricon Stadium on the Gold Coast in Queensland.

Phillips kicked two third quarter goals and had a game-high 28 disposals as the Crows held off a final quarter fightback by the Lions to secure the title.

In 27-degree temperatures with 74 per cent humidity Phillips, 31, led the team onto the oval at 1.30pm on Saturday carrying her two young children Brooklyn and Blake in front of a 15-000-strong crowd.

As she celebrated and hugged her emotional teammates, coach and support staff after the full-time siren sounded, she told the Seven network she loved the game.

“It’s been part of my life since I was born.

“I had my parents with me, my family and my kids here to support me.

“It’s the best game in the world. I’m so happy to share it with this club and my family.”

As the Adelaide Crows team celebrated on the field amid tears, hugs and exhaustion, team mate Ebony Marinoff, 19, said she was so proud of the girls.

“It was a tough, tough game and quarter by quarter we kept pushing and we really pushed to the end. I couldn’t be prouder,” she told the Seven network who broadcast the game live.

“We just made history.”

Sarah Perkins, 23, who was overlooked in the draft last year, said being an AFLW grand final player felt “bloody amazing”.

“We’re one big family and I’ve got 26 sisters and some coaching staff for life now and they’re all really special to me and they’ll be with me forever.”

The day began with great anticipation and expectation despite the game being moved at the 11th hour from the Gabba in Brisbane after the recent Adele concerts caused havoc on the oval.

ARIA winner Megan Washington was tasked with the pre-match entertainment on her keyboard, belting out a short set of songs before singing the national anthem.

Commentators were quick to list the players’ skill sets outside of football, with many of them coming from netball, basketball and athletics backgrounds.

Their occupations included midwives, construction workers and even an army medic.

Adelaide Crows began with what was described as a dream start —within 20 seconds the first goal was kicked by Kellie Gibson, 20.

Brisbane Lions responded with a goal from Jessica Wuetschner, 24, and it was game on.

By three-quarter time, after an eight-week competition, the Adelaide Crows held a 12-point lead going into the last quarter and it felt like it was going down to the wire.

But as injuries and fatigue hit both teams (Anderson popped a shoulder and Koenen sustained an ankle injury) the players were getting into desperation mode before the Adelaide Crows won by only five points.