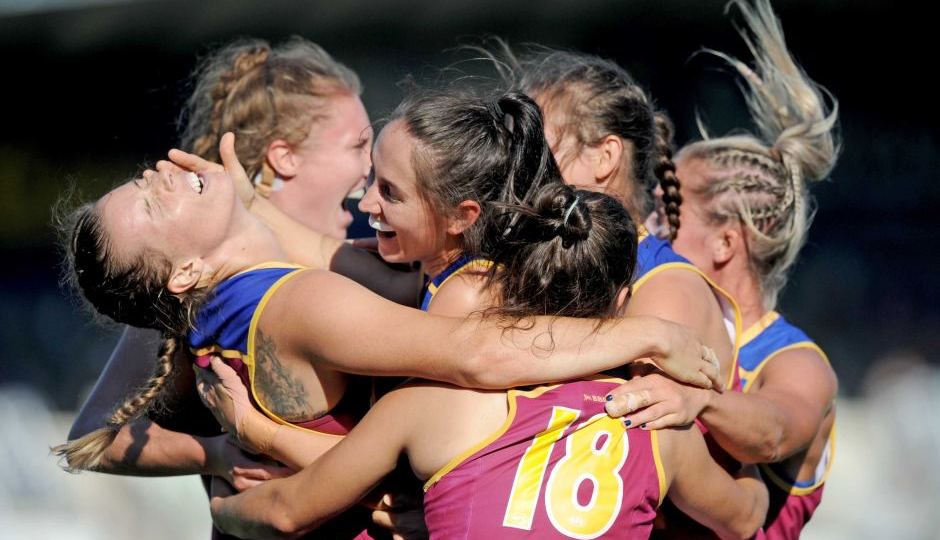 The Brisbane Lions went undefeated during the seven-game season in the AFLW. Photo: AAP

The Brisbane Lions have questioned why grass was sown onto the field so late, in a relatively small space which covers about two wickets.

Brisbane won the right to host the decider after an undefeated season, over seven rounds.

The Lions will instead play Adelaide on Saturday afternoon at Carrara Stadium, with the match now set to be the curtain-raiser for the men’s round one Queensland derby.

Lions’ player Selina Goodman said they were disappointed they would not get their standalone match.

“I would say because we have earnt the right,” she said.

“Like a few of the the girls have said so far, it doesn’t matter where the venue is or what time, or what opposition we’re playing, we’re going to be there raring to go and ready to win that premiership.”

‘Let down by ground staff’

After a final inspection of the field on Monday, Brisbane Lions chief executive Greg Swann said a small patch of grass had caused the team’s dream to come undone.

He said grass had been recently sown on the Gabba’s pitch.

“We are disappointed the grass was sown knowing there was a football season coming up and it’s hindered what is happening here,” he said.

“It is shifty and hasn’t taken yet.

“Why that has been allowed to happen is beyond us.

“Adele has played around the country everywhere and other grounds have been able to get their surfaces up.”

"There was a delay because a final inspection today deemed Gabba unsafe. Alt venues had to be looked at. MCG offered as option" – G Swann pic.twitter.com/E08QwRadaV

AFL chief executive Gillon McLachlan said the code was “profoundly disappointed” the grounds would not be available for what would be the first women’s grand final, despite weeks of discussions.

He said attendance would be free and hoped the state government would “maximise transport options” for the game.

Gabba manager Blair Conaghan said they had been “extremely motivated” to host the AFLW final.

“The decision to not host the final has not been taken lightly and prevalent in this decision has been player safety,” he said.

“Any surface instability can pose safety risks to players, particularly in a game like AFL where players are sliding or quickly changing direction.”

AFL Fans Association President Gerry Eeman said Lions fans had a right to be annoyed by the ground change.

“Lions fans deserve to see their team host the game at the Gabba, not at another team’s home ground, 70 kilometres to the south. Lions fans have every right to be angry.”

Former Brisbane Lions coach Leigh Matthews criticised the failure for the grounds to be ready.

He pointed out other stadiums did not have issues after their Adele concerts.

Adele at Etihad , OK for footy 1 week later , Adele at Gabba , unsafe for footy 3 weeks later, who is liable for the embarrasing stuff up ?

British singing superstar Adele held two sold-out concerts at the Gabba, with thousands of seats put on the playing surface which was protected by a white plastic covering.

Queensland Cricket were not happy with the results, and wrote to Stadiums Queensland asking for the AFLW grand final to be held elsewhere, and for the men’s Lions team to play away from the Gabba for the first few rounds to allow ground staff to deal with what they said was the impact of the concerts on the surface.

At stake, they said, was the ability to give the turf time to recover in order to have a proper surface for the first Ashes Test, scheduled to begin on November 23.

The Adelaide Oval and the MCG had been suggested as possible venues ahead of Monday’s announcement.