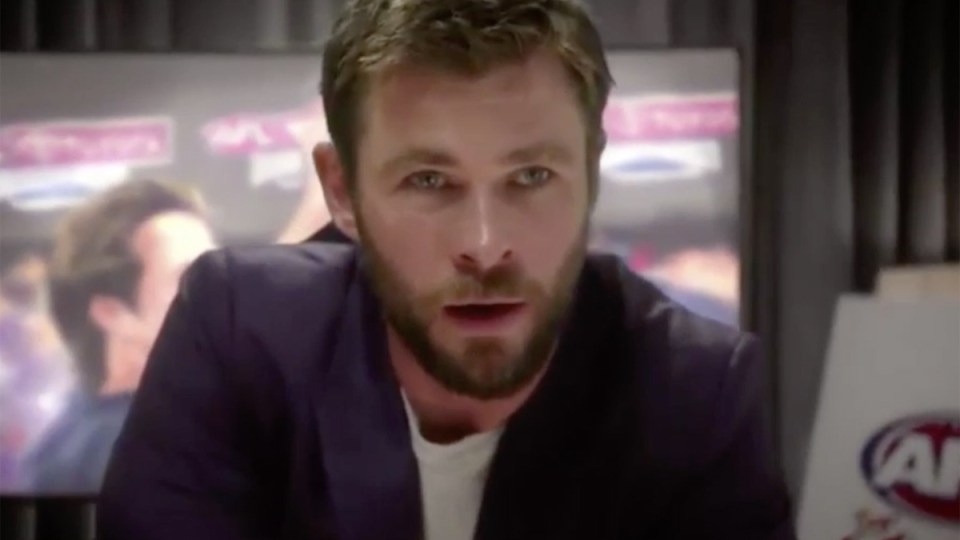 Melbourne-born Chris Hemsworth is the star of the AFL’s advertising campaign for the 2017 season, which begins on Thursday.

The 33-year-old movie star – best known for his roles in Thor and Rush – is a passionate Western Bulldogs fan and was at the MCG to see his club break a 62-year premiership drought in October last year.

So it was probably a pretty easy sell for the AFL when it asked Hemsworth to tell the story of the Bulldogs.

The ad centres on a movie pitch from Hemsworth to a bunch of American producers, who sit there confused as the actor passionately reflects on the AFL’s remarkable 2016.

“Will the Doggies go on to find glory? Or will another team rise up and steal their crown?

“Nobody knows. But the Bulldogs have a secret weapon. The Bont.”

‘The Bont’ is a reference to Western Bulldogs star Marcus Bontempelli.

From this point, Hemsworth appears in a Bulldogs jumper and does a range of ‘footy things’, including a banana kick – to a “What’s a banana?” response – and tackles an assistant through a window.

The AFL’s head of marketing, Julian Dunne, said that Hemsworth was delighted to be involved.

“The Western Bulldogs premiership win is one of the great sporting stories, and with Chris being such a Bulldogs fan, he was a natural fit,” he said.

“He was really passionate about the campaign and involved through the whole process, including the idea and the script.

“He was brilliant to work with and we were thrilled that he wanted to be involved.”

Hemsworth regularly posts about his team on his social media pages.

This Instagram photo – taken after the Western Bulldogs beat Greater Western Sydney in a preliminary final last year – was ‘liked’ more than 437,000 times.

In another Instagram post, he claimed the Bulldogs winning the 2016 Grand Final was as good as the day he met his wife.

“With my dad watching the @westernbulldogs win the first @afl grand final since 1954, the year he was born!!! best day ever !!! (Also meeting my wife was the other best day),” he wrote.

Hemsworth also starred in a 2014 ad for the AFL, narrating a campaign called ‘Everything’s Possible’ to promote the upcoming season.

Dr Danya Hodgetts, an expert in sports marketing from Central Queensland University, said that the ad would make a splash in Australia – and that including Hemsworth was a good choice.

But she did comment that the ad may confuse those who are not big AFL fans.

“Using a big name like Chris Hemsworth with broad appeal is sure to attract some attention outside of the AFL’s traditional viewing demographic,” Ms Hodgetts said.

“But I think, like the Hollywood studio executives in the ad, anyone not already familiar with the AFL might find the ad a little confusing. What’s a Bont?!

“But it’s a great season launch. The ad will appeal to existing footy fans and get the banter going.”

Richmond and Carlton open the 2017 AFL season on Thursday evening at the MCG.