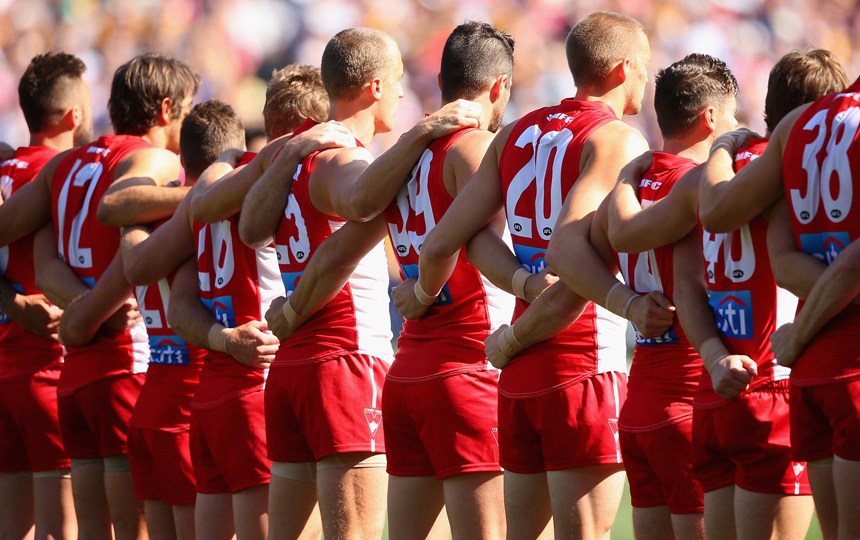 The Sydney Swans are dealing with a COVID-19 outbreak in the AFL club's players' ranks Photo: Getty

They are special occasions for players and coaches.

Most of the messages you want to get across to your players are delivered during the week but it’s like the game starts 15 minutes early for a coach on Grand Final day.

Your players look to you for pre-match motivation and inspiration. And you need to deliver.

In my experience, if you can nail that pre-game speech you are a long way to nailing that first 10 minutes as a team.

Here’s what I would tell both the Bulldogs and the Swans if I was in charge of them this Saturday.

Boys, this is your chance. Your chance to make history.

This club has only 20 premiership players. Make it 42. Win today and you lads will have a bond for the rest of your life.

You can only win today if you do it as a group, though.

That’s how you’ve beaten them the last two times we’ve played them.

Don’t worry if you are anxious or nervous. Your opponent will be just as nervous.

The start is absolutely critical. Control yourself emotionally – I don’t want to see any silly free-kicks given away early.

Let’s isolate our forwards when we get the chance.

Jake Stringer, Tory Dickson and Marcus Bontempelli – when you are forward, get in space.

To the other forwards – get out of there.

Let’s take Buddy Franklin’s focus away from the game as soon as we can.

Push him, shove him, make him angry – but all within the rules. Get his focus away from the ball.

Get him up the ground, too. He can hurt us outside 50 – but it won’t be as bad. Limit the damage.

To our defenders – be prepared to leave your opponent to assist inside 50. One player can’t beat Franklin but many of us can.

Watch for Ben McGlynn and Gary Rohan around goal – but Kieren Jack’s kicking may not hurt us. Know that.

Every player – make one effective tackle a quarter. And make it stick.

And when Tom Mitchell comes off the bench, change his psyche.

Let’s sit on him for five minutes, immediately. Let each other know when he is coming on.

Interrupt his flow – he’s had it too easy in the last few weeks.

Two years ago, on this very day, we didn’t play like Sydney.

We let Hawthorn bully us and we know what happened after. Do not let it happen again.

AFL is a game of physical intimidation, boys – it’s war without weapons.

It’s an eye for an eye on Grand Final day, though.

Do everything within the rules to let the Bulldogs know we are here.

North Melbourne tried it earlier this year and it didn’t work. Don’t waste your energy on that – it won’t affect him.

Hit them hard early. In the first 10 minutes, we’ll see what they are made of.

We saw them celebrating their preliminary final win. It was like they’d already won it. They don’t know what’s coming, do they?

They are going to handball it constantly in congestion – but we’ve never seen that style of play win a Grand Final. Why? It doesn’t stand up under intense pressure. It’s up to us to show that.

Buddy, vary your leads. Short and sharp, then long leads, then inside out and then outside in.

You have so much natural ability and defenders just can’t go with you.

Stick inside the 50 today and win us the game. If you kick five, we’ve got this.

Gary Rohan and Ben McGlynn, sit at Buddy’s feet and you’ll see plenty of the ball.

Jason Johannisen can carve us up today but he won’t if we take him to the goalsquare.

We got hammered in inside 50’s last week and we need to better around the clearances.

But we’ve proven this year we can do it.

Now go out there and get them.

Denis Pagan: What it is like 15 mins before an AFL Grand Final