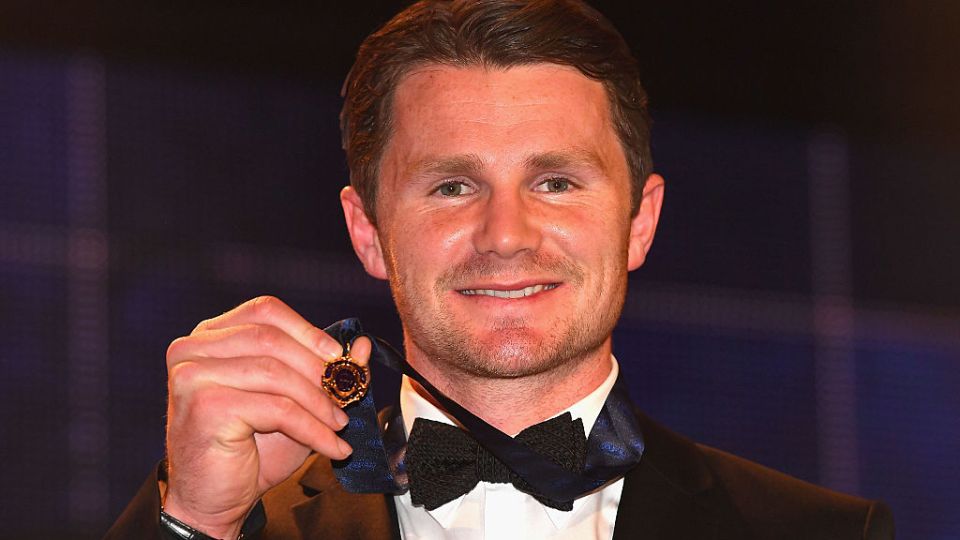 Patrick Dangerfield was favourite for the medal in 2016 and duly won it. Photo: Getty

Dangerfield capped off a magnificent first season with the Cats by polling in 15 matches, gaining maximum votes in nine of them to win the count with a record 35 votes.

The midfielder had an unassailable lead in the count with a round still to go, holding off closest rivals Luke Parker of Sydney (26 votes) and Richmond’s Dustin Martin (25).

Dangerfield, 26, said a tribute to 1989 Brownlow winner Couch during the evening put things in perspective.

Couch died on March 5 this year of a heart attack. 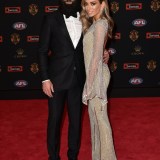 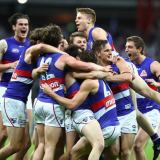 His former teammates Andrew Bews, Tim McGrath, Tim Darcy and Barry Stoneham spoke about Couch in a recorded segment during the Brownlow telecast.

“Ultimately, as footballers, team success is the most important thing,” Dangerfield said in his acceptance speech.

“But I think halfway through the count, when Paul Couch was replayed and the conversations around how Paul contributed to the game, it hit me what it would be like to be a Brownlow Medallists.

“So Couchy, this one is for you mate.”

Dangerfield, who joined the Cats this season after 154 games with Adelaide, needed three votes from the last game to break the record for most votes ever recorded in one season, set by Collingwood’s Dane Swan in 2011.

And 3 votes in the final round to @dangerfield35 to not only win the #Brownlow, but also break the votes record with 35 votes! pic.twitter.com/5BtKTNLC96

The 26-year-old was a short-priced favourite for the Brownlow, adding to his AFL Players Association and AFL Coaches Association gongs and becoming the first man since Gary Ablett in 2009 to be voted as the game’s best player by the umpires, players and coaches.

“I feel so lucky to be involved in such a wonderful football club,” Dangerfield said.

“I don’t think any individual stands up here just because of themselves, it’s a collaborative effort,” he added after receiving the award.

“We didn’t quite get there [to the Grand Final], but for me it’s been a recipe for success and a recipe for enjoyment.

“It’s a pretty serious business, AFL footy, but the link between enjoying life outside footy and putting in the hard work in preseason, I think Geelong has the right balance.”

His stellar season began with a best on field performance against premiers Hawthorn.

He racked up an incredible 48 possessions during a round 12 match against North Melbourne.

Dangerfield, who was drafted by Adelaide at pick 10 in the 2007 draft, also paid tribute to former Crows coach Phil Walsh, who died last year.

“I feel so privileged, as I know the Adelaide guys do, to have spent the nine to 10 months with Phil,” he said.

“What I learnt in that time has changed my life forever. It’s changed my view on football forever and the care that he showed is something that I want to exhibit as a player, as a leader, and in life after footy.”

Dangerfield surpassed Swan’s tally of 34 votes as the most polled under the 3-2-1 system.

In Monday night’s other awards, Adelaide’s Eddie Betts won Goal of the Year for his sensational effort against GWS that saw him evade a handful of Giants before slotting home brilliantly from the left flank.

Eddie Betts has won the 2016 @CoatesHire Goal of the Year for this beauty! https://t.co/JKaIOxAZft

Majak Daw’s huge leap against Collingwood saw him clinch the Mark of the Year gong.

North Melbourne's Majak Daw has taken out the 2016 @woolworths Mark of the Year for this leap. https://t.co/Wnu2CRvV6X

Geelong star Jimmy Bartel was presented with the Jim Stynes Community Leadership award following his work with the Face Up to DV campaign.

“Jimmy [Bartel] was a stand out for the selection panel, he demonstrated his immense commitment to this cause by not shaving his face or cutting his hair for the entire AFL season to raise awareness of the issue, whilst also opening up about his own deeply personal experience for the greater good of others,” AFL CEO Gillon McLachlan said in a statement.