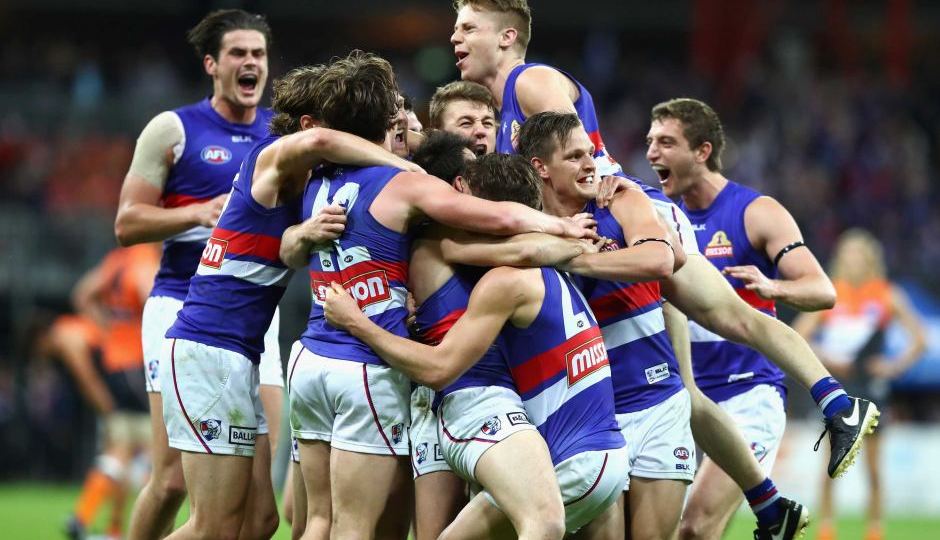 The Western Bulldogs’ thrilling six-point victory over Greater Western Sydney on Saturday could be the penultimate chapter in one of the greatest Australian sports stories of recent years, perhaps even decades.

Think that’s overblowing it? Consider this. It was the second-most watched game in AFL history outside of a grand final. This between a club that is only in its fifth year of operation and a club that has not played in a grand final since 1961 (it has won only one, in 1954, since joining the VFL/AFL in 1925) and narrowly avoided being merged with Fitzroy in 1989.

The Bulldogs have not been easybeats, but unlike many of their crosstown rivals in Melbourne, nor are they on easy street.

That’s partly what attracted the TV audience on Saturday – some 2.387 million viewers tuned in to free-to-air and pay television, peaking at 3.65 million nationally.

For the Bulldogs to even reach this year’s decider is a minor miracle given the horrific injury toll they have endured. While that has hurt their playing stocks it adds to the romance of the Bulldogs’ path to the biggest day in footy. 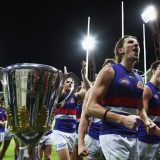 The Bulldogs fairytale moves to the grandest stage 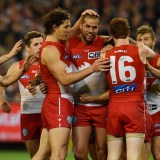 It took just one quarter for Swans to end Cats’ season

Add that to the fact they have come from seventh on the AFL ladder to do so; only one team – Adelaide in 1998 – has won the flag from lower than fourth under the current system.

But now they are there – against minor premier Sydney – the entire footy world is not only watching, it could be barracking for them. What a story a Doggies victory would be.

They might have to do it without ruckman Jordan Roughead, who remains in serious doubt for Saturday’s clash with hyphema (blood in the eye) after being hit in the right eye with the ball.

Jordan Roughead is in doubt to return after this painful incident earlier. #AFLFinals https://t.co/PpEb9kALvq

Roughead consulted a specialist in Melbourne on Sunday but the Bulldogs are confident he and Matt Suckling, who missed the GWS clash with an Achilles injury, will be fit to face the Swans in Saturday’s premiership decider.

Lin Jong (collarbone) is another concern but a best afield performance in Footscray’s VFL premiership victory over Casey will have him pressing for selection.

Injuries, most notably a season-ending knee injury to captain Bob Murphy, have been a recurring theme for the Bulldogs this year, but coach Luke Beveridge’s side has shown remarkable resilience to earn their premiership shot.

“It’s hard to put it down to just one thing, but if I had to I’d say it’s the belief in the group,” Dogs midfielder Jack Macrae told reporters on Sunday.

“We’re a young group but we’re as determined as any I’ve ever seen. The belief in the players and the spirit that we get off each other throughout the year (has been great).

“When we had injuries players stepped up – it was always about who was coming in to play and not who was going out.

“It’s been a tough year at different times but to get through the other side has really made us grow into a complete team.”

As they have done all this finals series, the Dogs will go in as huge outsiders against the Swans – if AFL grand final experience is anything to go by.

The Bulldogs side that vanquished GWS in the preliminary final didn’t contain a single player with first-hand AFL grand final knowledge.

Indeed, the only Bulldog with experience of a season decider is former dual Hawthorn premiership player Suckling.

For all the talk about Sydney’s host of first-year players and how the team has changed enormously since the 2014 grand final loss to Hawthorn, the Swans have no shortage of men who have attended the big dance.

The side that took the field for Friday’s preliminary final against Geelong included 12 players with grand final experience, with seven of them having played more than one.

Lance Franklin will play his fifth grand final, having appeared in three for the Hawks and one for Sydney against his former club.

The Swans could potentially name 14 to 15 players with AFL grand final know-how, depending on potential team changes for next weekend.

Sydney’s most experienced player and co-captain Jarrad McVeigh, who played in the 2006, 2012 and 2014 season deciders, will come back in if he overcomes the calf issue which kept him out of last Friday’s game.

Veteran and 2012 premiership player Ted Richards could have some chance of a fairytale final game in Swans colours, if fellow key defender Aliir Aliir doesn’t recover from a knee injury.

The popular 33-year-old back, the club’s oldest player, hasn’t had a chance to add to his tally of 261 games since the round 17 loss to Hawthorn.

If he doesn’t make the cut against a Bulldogs side not exactly stacked with tall forwards, then younger brother Xavier could carry the grand final torch for the Richards family, after breaking in to the side as a forward in the latter part of the season.

Sydney’s emergencies for last Friday’s game included Harry Cunningham, yet another player with experience of an MCG end-of-season showdown.

One Swan without grand final experience who coach John Longmire hopes to have the option of playing next week is brilliant first-year defender and Rising Star winner Callum Mills, who has missed their last two finals with a hamstring injury.