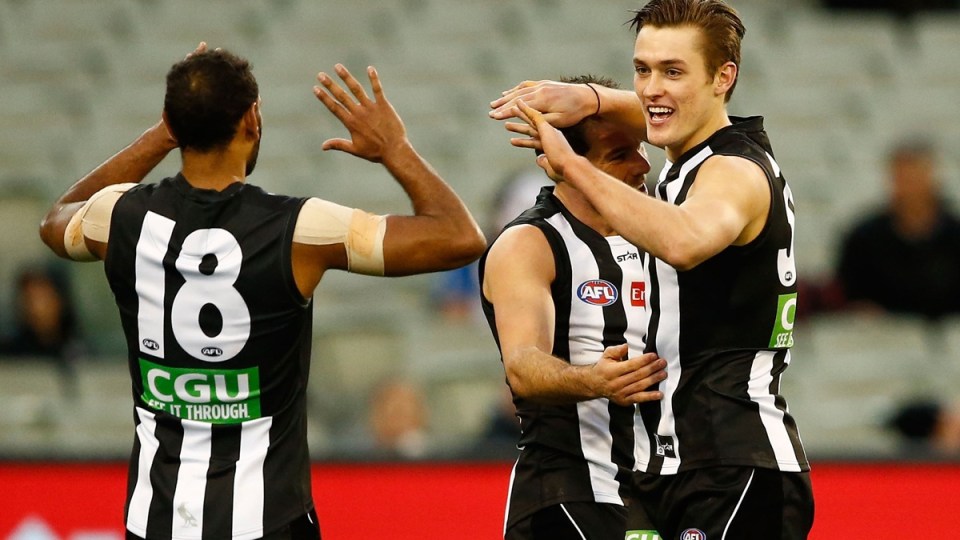 In three years, you will have the best key forward in the AFL.

For the last couple of years, footy fans have marvelled at the performances of GWS star Jeremy Cameron, Melbourne’s Jesse Hogan and Gold Coast’s Tom Lynch.

But all three – and the likes of Jonathon Patton, Joe Daniher and Tom Boyd – will be surpassed by a man called Darcy Moore.

Moore rightly won the Rising Star nomination this week for a stellar cameo against the West Coast Eagles at the MCG on Saturday.

He didn’t even play two full quarters but kicked three goals and took six towering marks – five of which were contested.

The sight of Moore soaring in packs and taking grabs is one we should get used to.

The crowd at the home of footy loved it, too, getting excited every time he went near the ball in a match the Magpies ultimately won.

Moore’s absence in the second half was felt, as he suffered hamstring tightness, but news the problem is only minor will be of great relief to the Collingwood faithful.

His performance was a great reward for those fans, too.

When you’re going to the footy in the middle of winter and your side can’t make the finals, you just want some hope. Something to believe in.

Moore gives them just that.

In a period for Collingwood where the form and future of long-term key forward Travis Cloke has been questioned several times, the club can rest easy knowing they have a ready-made replacement for Cloke should they trade him at season’s end.

Moore is also an excellent set shot for goal – something Cloke is not.

In comparison to his peers, Moore has already surpassed Patton, Daniher and Boyd in terms of overall output.

This is not to suggest that all three won’t become key players for their respective sides, but as it stands, Moore is performing better than all of them.

With regards to Cameron, Hogan and Lynch, Moore still has a way to go.

Cameron and Lynch are genuine stars, with the latter tipped to take over as captain from Gary Ablett Jnr at the Suns in 2017.

Hogan is the type of player you can build a side around (think Wayne Carey and North Melbourne), and the same can be said of Moore.

Moore has a natural confidence – and the work ethic that all key forwards need to be successful.

He is also a leader out on the field and sets a tremendous example for his teammates, both older and younger.

Furthermore, if there is any indication that the pressure of being the son of a Collingwood legend was affecting him, he is certainly doing a good job of hiding it.

Apart from his natural ability and leadership qualities, he appears to be quite a mature footballer for his age.

Despite their relatively poor season, Collingwood, and their fans, would be thoroughly enjoying the progress that Moore is currently making in his short career.

And the scary thing for the rest of the competition is the fact he is only going to get better and better.

This is why Collingwood fans are getting very excited