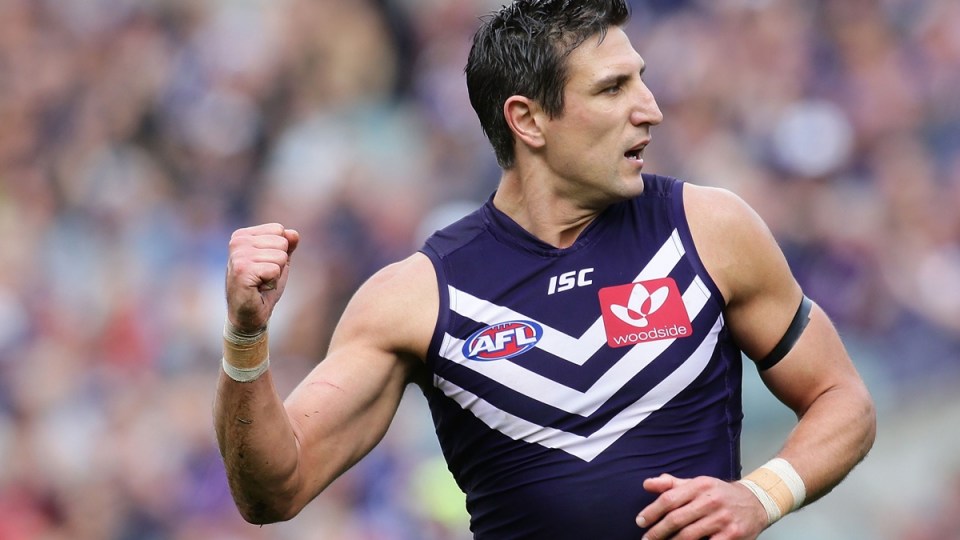 Simply The Best: Pavlich has been a superstar. Photo: Getty

Four of the game’s greats celebrate huge milestones this weekend.

North Melbourne’s Brent Harvey will break Michael Tuck’s VFL-AFL games record when he runs out for the 427th time against St Kilda on Saturday night.

Alongside Enright will be great Geelong mate Jimmy Bartel, who is playing game 300.

Harvey is a five-time best-and-fairest winner and four-time All-Australian.

Pavlich is Fremantle’s greatest ever player, with six best-and-fairests and as many All-Australians.

Enright is arguably the best back pocket since Bernie Smith, and twice won the club championship in a premiership year.

And Bartel is just the second man to win a premiership, a Norm Smith Medal, a Brownlow and play 300 games.

They’re legends and future hall-of-famers, all of them.

But if we line them up in the schoolyard, who do we pick first?

For sheer versatility and consistent performance, Pavlich gets the nod for me.

An All-Australian at both ends of the ground, Pavlich broke the mould of the lumbering power forward with his ability to pinch-hit in the midfield and down back.

A true utility earlier in his career, Pavlich was a defender in 2002, a high half-forward/midfielder in 2003, before settling at centre-half-forward in 2005.

At 192cm, he may have become a full-time midfielder had he debuted this decade, but for the best part of 15 years, he was Fremantle’s lone shining light in attack.

For argument’s sake, it goes:

Must watch
Friday night down at the Cattery. How will the Bulldogs respond after a tumultuous week? Top-four aspirations of both sides are on the line, and at this point of the season, every game is genuinely worth eight points. A cracker.

Most at stake
Harvey’s milestone aside, so much is riding on Saturday night’s clash between North Melbourne and St Kilda. The Saints could steal an unlikely finals berth with a win, while the Kangaroos simply have too much to play for.

Will happen
Collingwood/West Coast will be a dour, low-scoring encounter. The Pies will win in an upset.

Won’t happen
Brent Harvey’s games record will not be broken in our lifetime.

One to watch
Aaron Francis had Essendon fans salivating. With his silky skills and strong size, all AFL fans will enjoy watching this kid for the next decade.

Trending
Scores across the league continue to dip after a high-scoring start to the season. Is it a directive from coaches, or a result of inclement winter weather?

Feeling the heat
Two classy ball-users had shockers last weekend. Sharrod Wellingham and Matthew Suckling both conceded goals in tight clashes after turning the ball over inside defensive 50. As rebounders, do they become more conservative this weekend or continue to back themselves in? Any further mistakes could be catastrophic at this time of the year.

Pick me
Scott Selwood racked up 29 touches and seven tackles in the VFL. A Geelong debut can’t be too far away.

The whisper
We all know the Brad Hill situation, but which out-of-contract Fremantle midfielder could be used to lure the triple-premiership player to the Dockers?

Don’t set the IQ
Licking their wounds after another loss to Geelong, Adelaide hosts Essendon at Adelaide Oval. If Adelaide’s suite of stars aren’t rested, it could get ugly, so take the dog for a long walk.