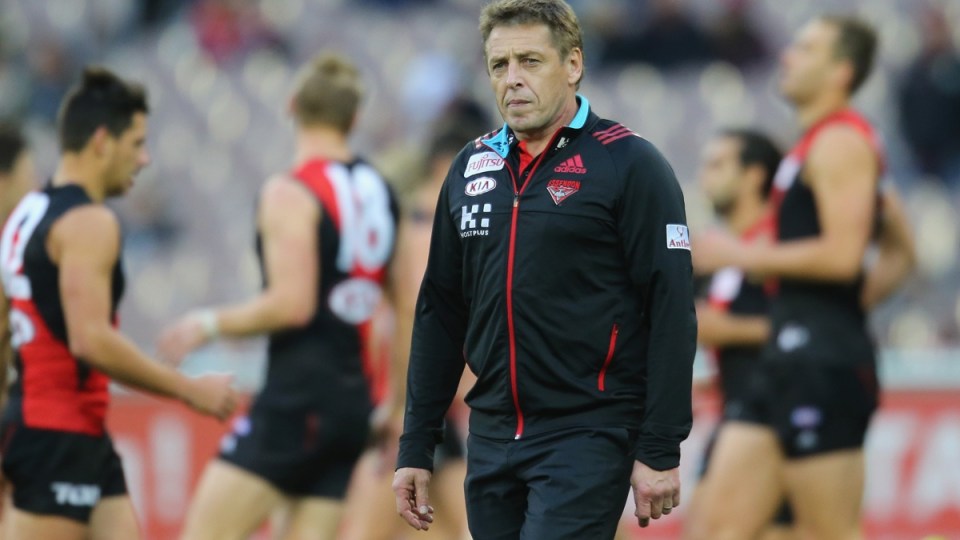 Former Essendon coach Mark Thompson has ominously stated that disgruntled past and present Bombers are likely to take the AFL to court – and seek around $50 million in compensation.

The fallout from the club’s ill-fated 2012 supplements scandal has shown no signs of abating this year despite the Court of Arbitration for Sport (CAS) finding the ‘Essendon 34’ guilty of doping in January.

The court’s findings saw 12 current Bombers banned for the 2016 season, a decision that deprived the club of many of their best players. Essendon have won just one match this year.

The punished players filed an appeal with the Swiss Federal Tribunal and a verdict is yet to be reached.

And further legal action is likely, according to Thompson, who was an assistant coach at Essendon from 2011 to 2013 before standing in for the banned James Hird as senior coach in 2014.

“It [the saga] won’t be over next year,” Thompson said on Triple M radio Thursday.

“They [players] will start to sue the AFL [for] $50 million probably.

“I just know it’s going to happen … I’m not interested in doing it.”

In an extensive interview, Thompson, who is also promoting his newly released book, Bomber, hit out at controversial sports scientist Stephen Dank.

Dank, who had his home peppered with bullets on Saturday, has refused to speak to the Australian Sports Anti-Doping Authority (ASADA) about the supplements program he oversaw at Essendon.

But Thompson said that Essendon’s players deserved to know what they were injected with.

The CAS said it was “comfortably satisfied” that Essendon’s players used banned substance Thymosin Beta-4 in 2012, but Dank has not confirmed that.

“It’s been handled poorly, we all admit that, there’s been a lot of pain caused from it, a lot of broken relationships and we all wish it didn’t happen. Obviously it has,” Thompson said.

“We should still try and seek the truth. Stephen Dank please tell us what you gave the players, that’s all they want to know.

“They don’t care if they’re guilty or not at this stage, they just want to know what they had and they’ve got every right to demand that.

“We need people in the room, almost, and just thrash it out and tell the players.

“They are the No.1 priority and they got told at a fairly early stage that [peptide] AOD [9604] – the one that all the controversy was on for six months – it was not harmful to them.

“Yet the way that everyone was banging on, it was almost like they were all going to die of cancer.

Thompson said the misinformation handed out to players was “totally wrong”.

“That’s the worst manipulation – going in and being told that their children could be deformed from the drugs they had,” he said.

“It was totally wrong and unfair and unfounded and should not have happened.”

Thompson added that if players were injected with a banned substance it was “12 or 14” and not the 34 who were hit with suspensions.

The Bombers, who sit last on the 2016 ladder, travel to Adelaide to play the Crows on Sunday.

Spain and Portugal see major leaps in monkeypox infections
Peter Dutton touted as next Liberal leader as he claimed victory in Dickson
Volodymyr Zelensky: How war will end as Ukraine ‘breaks backbone’ of Russian army
Jim Chalmers decries Coalition waste as Labor hits the hustings amid downpours in Queensland
Anthony Albanese, Scott Morrison cast their votes in Sydney
Australian aces at French Open out to show there’s life after Ash Barty
Why Matthew Pavlich is the best of the AFL’s Round 19 milestone men
Today's Stories

Sorry, footy fans, but there’s no end in sight to this saga