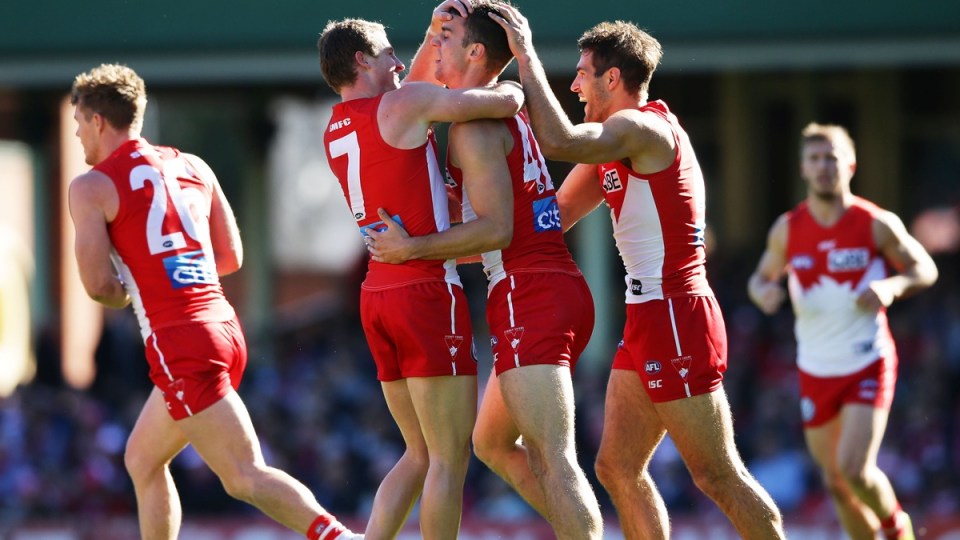 The Swans are headed for finals footy - but where? Photo: Getty

Following a last-gasp loss to the Hawks at the SCG a fortnight ago, and an unconvincing win over Carlton at the same venue on Saturday afternoon, some in the media have written Sydney off as serious premiership contenders.

Indeed, only minutes after being beaten by less than a kick against premiership favourites Hawthorn, Channel Seven commentator Luke Darcy looked solemnly into the camera and declared to the viewing audience that the Swans had ‘serious issues’ they needed to fix before September.

A hard-fought victory over the lowly Blues on the weekend has only reinforced the view the Swans may struggle in September, and punters appear to agree.

The club’s straight-sets exit from the 2015 finals series was also alluded to as a sign of things to come.

Fast-forward almost 12 months and the Swans are sitting in third position on the ladder, with a healthy percentage that is second only to GWS, and a run home that includes four out of five games against bottom-eight sides.

The other is against an out-of-form North Melbourne in Hobart.

Sydney’s defence – although regarded at the start of the season as old and slow – is ranked first in the AFL, having let in just 69.7 points per game.

Although Sydney are ranked only eighth in terms of points scored with 93.47 per game, prior to Kurt Tippett going down with injury in Round 12 they were scoring at 98.5 points on average.

Tippett is reportedly ahead of schedule in his rehabilitation and is expected to make a return before the end of the home-and-away season.

Their midfield is as good as any in the competition, and although not as quick as some others, their contested game is the best in the AFL.

Sydney are ranked first for contested possessions, with Josh Kennedy (third), Dan Hannebery (seventh), and Luke Parker (eighth), all ranked in the top 10, while Tom Mitchell comes in at equal 18th.

They are also ranked first for tackles, second for stoppages, rebound 50s and contested marks and top five for disposals, handballs and clearances.

Statistics can often be skewed if used sparingly but Sydney’s domination across all areas of the midfield is particularly noticeable.

Even more pleasing for coach John Longmire is the fact that despite being accused of being past their prime, Sydney actually have a very good mix of young and old players.

The Swans have debuted eight players in 2016 and some have played key roles.

Callum Mills has been superb in a half-back role despite having never played in the position before, even as a junior, and is one of the favourites to take out the Rising Star Award.

Tom Papley, George Hewett and James Rose have all impressed at different times, while ruckman Sam Naismith and defender Aliir Aliir have shown promise in the last month.

Yet despite all of the above, the naysayers remain only a poor performance or two away, which is difficult to understand given the amount of times the Swans have proved these so called ‘experts’ wrong.

Since 2012 the two most dominant teams in the competition have been Hawthorn and Sydney.

During that time they have met in two grand finals, and the ledger stands at one apiece.

And despite the misgivings of some in the media and amongst betting agencies, it would hardly surprise to see the Hawks taking on the Swans for the third time in four years at the MCG on the last day in September.

Why you shouldn’t write off Sydney