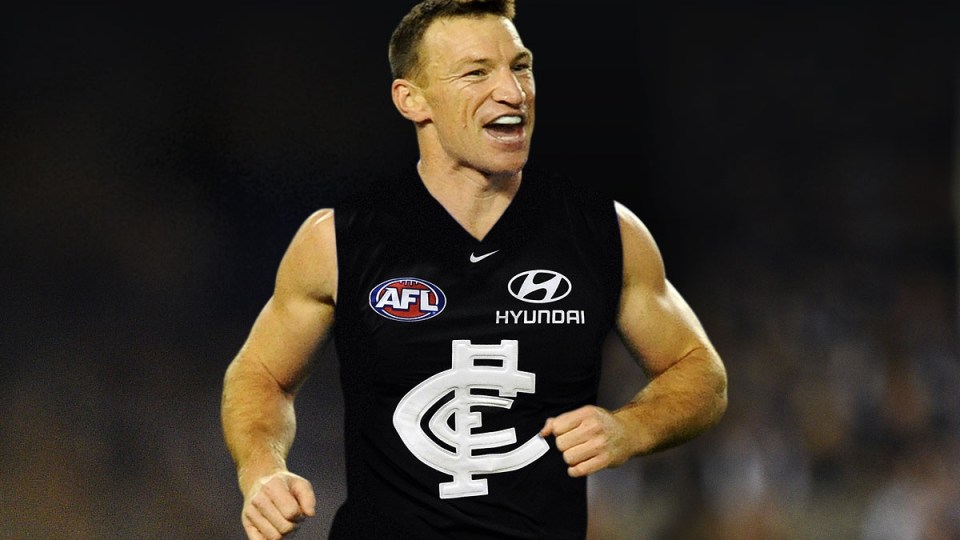 What Harvey could have looked like. Note: Photo has been digitally altered. Photo: Getty

Brent Harvey could have broken the AFL’s all-time games record in a Carlton jumper.

I coached Brent – who will play his 427th match against St Kilda on Saturday evening – at the Kangaroos from late 1995 to 2002.

I knew how good he was and not long after I went to Carlton, I tried to bring Brent across to the Blues.

I knew he was having a few issues at North Melbourne and I also knew that Carlton would have made a ‘godfather offer’ to him.

As we have seen in other media outlets this week, Brent was having contract problems with the Kangaroos.

Brent was and still is a super talented player.

He’s quick, has great skills and is full of desire and persistence.

I thought that he could have set an ideal example for the younger players at Carlton.

And I think at that time, he just wanted to be wanted.

So I spoke to him and his management and asked him to come.

I got the impression that North Melbourne weren’t paying him top dollar but he wasn’t the sort of player to swap clubs for money.

He was so loyal to North Melbourne and it was a fairly brief conversation.

Brent would have been outstanding for the Blues, but in hindsight turning Carlton down is probably the best decision he has made.

Interested in Brent Harvey’s career in numbers? Check it out in this infographic from SEED

Back to the start

I still remember giving Brent his debut in the final round of the 1996 season.

I put my arm around him on a Thursday night after training and said ‘we’re going with you, son, I hope it goes well for you’.

Brent didn’t even get a kick in his first match but he quickly cemented himself in North Melbourne’s senior side in 1997.

It wasn’t until a state game in 1999 that he started getting the plaudits he deserved.

I’ll never forget that day – he kicked five goals and was best on ground against South Australia. After that, the footy world knew all about him.

As ‘Boomer’ got better and better, he had to deal with getting tagged by the opposition.

He didn’t handle it that well at first and I remember several discussions we had about it.

One day I told him about how Hawthorn’s John Platten used to run from the midfield to the goalposts and back repeatedly during games to tire his opponent.

He started using it to great effect and before a game against Carlton, told opposition tagger Anthony Franchina before the opening bounce that he wanted to have a race around the centre square.

After going around two-and-a-half sides of the square, Franchina was gassed.

Brent’s running power gave him a wonderful psychological advantage in those battles.

I’m so glad he won a premiership in 1999 – there are plenty of great players and coaches who never win one.

Another thing about Brent is he’s not just a quality footballer. He’s a quality man.

Brent is very family-oriented and has worked his socks off to get where he has.

That desire in him has never faded. He’s really wanted a long career in AFL and he has got it.

His persistence has set an incredible example for others at North.

I’m going on Saturday night and I’m looking forward to it.

I never thought for one moment Michael Tuck’s record would be broken but ‘Boomer’ is about to do it.

And it couldn’t happen to a better man.

Denis Pagan coached 344 games of AFL football with North Melbourne and Carlton, winning two premierships with the Kangaroos in 1996 and 1999. Click here for more of his columns

How Brent Harvey could have become a Carlton player