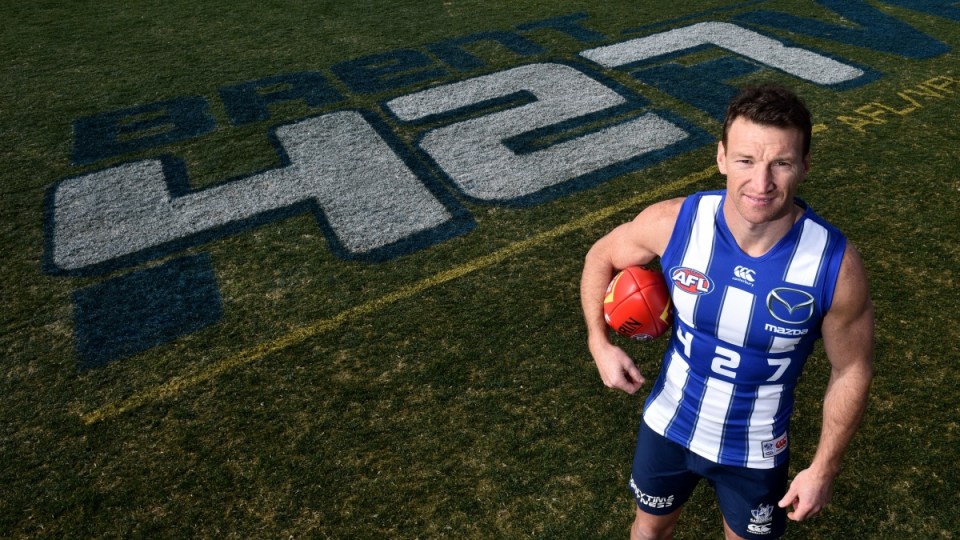 Brent Harvey could extend his record AFL career past 450 games, with the North Melbourne legend adamant he can continue next season.

But Harvey also concedes it is now up to the club whether that happens.

On Saturday night, the speedy Kangaroos forward breaks the all-time games record of Hawthorn’s Michael Tuck when he plays his 427th senior match.

Harvey, 38, has played every game this season.

He plans to sit down with coach Brad Scott in the next couple of weeks and start the now-annual discussion about his playing future.

Harvey joked at Monday’s media conference for the milestone that he “thought this might be coming” when asked about playing beyond this year.

“I’ve always said if my mind and body are good, then I’d love to play football for as long as I can,” he said.

“But unfortunately it just doesn’t revolve around me.

“It’s how the club is going, how the team is going.

“There are a lot of stars that have to align for that to happen and if it happens, it will be fantastic.”

There was plenty of speculation around Harvey’s future last year before confirmation that he would continue and have the chance to break the games record.

“The day I fall out of love with football, I will put my hand up first and say I need to walk away – I’m still in love with it.”

From Harvey’s perspective, the question remains a no-brainer.

“Absolutely – if the club says yes, I have no doubt that the body and mind (will) hold up for another pre-season,” he said.

Harvey admitted luck and good genes had been factors in lasting this long, but added there was a lot that had not been left to chance.

“I prepare as good as anyone I think,” he said.

“I’ve put in a lot of hard work over the years and in the back end, sometimes players don’t get there because they haven’t put that preparation in.

“My preparation has been pretty faultless through a long period.”

Harvey added that his preparation for Saturday night would focus on beating St Kilda, rather than the record.

A win over the Saints should guarantee that North make the finals.

“It won’t be over the top – my focus, again, will be on going out there and starting well as a team,” he said.

Harvey said it was humbling a couple of weeks ago to have lunch with several players at the top of the all-time games table, including Tuck.

He added the Kangaroos would honour Tuck at the game.

Tuck will be unable to attend.

“He’s been an iconic figure of our game for so long,” Harvey said.

“Even my son, who never saw Michael Tuck play, he knows who he is.”

While rapt about the record, Harvey admits he will be glad when the game is over.

He has a good record for his milestone games and hopes the `Roos will win again.