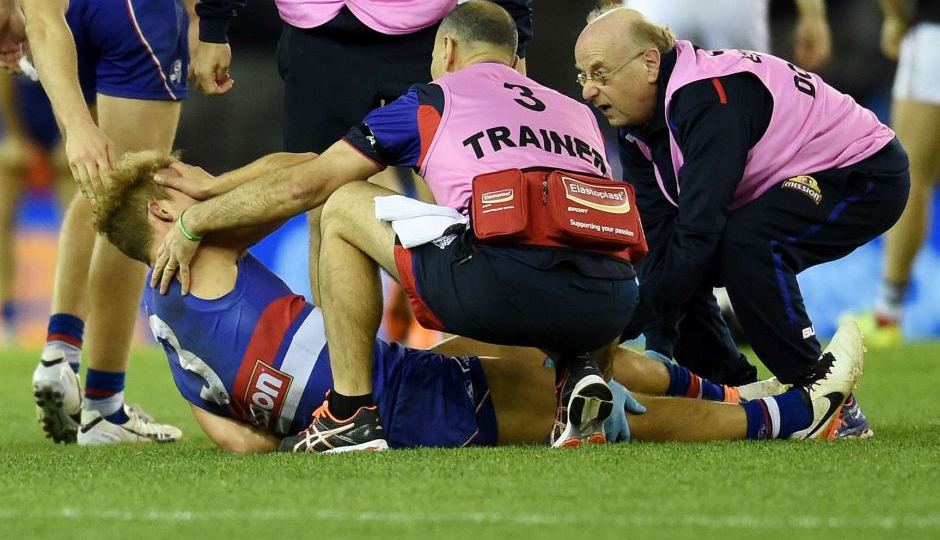 Mitch Wallis looked in agony as he was taken from the field with a broken leg. Photo: AAP

Western Bulldogs coach Luke Beveridge concedes it will be hard for his side to focus on facing Geelong after a “traumatic” Saturday night.

Wallis fractured both his tibia and fibula in a sickening moment at Etihad Stadium, where he accidentally kicked his left leg while being tackled by Shane Savage.

Beveridge could be forced to make three changes for Friday night, with veteran defender Dale Morris sitting out the second half against St Kilda after tweaking his hamstring.

The second-year coach likened the mood in the changeroom to that when inspirational captain Bob Murphy ruptured his ACL earlier this year.

“By the end of Tuesday when we walk out of the building at the club, we’ve got to be ready to move on,” a shellshocked Beveridge said on Saturday night.

“We’ve put too much work in to let it fall by the wayside.

“How receptive to that kind of message our players are tonight, I couldn’t tell you. But this is a challenge. It’s a traumatic night and it’ll test us.”

Depending on other results, the Bulldogs could slip as low as eighth if they lose to Geelong.

Beveridge insisted they could still challenge for the premiership despite a horror injury run.

“There’s still a bit left in our year and we can still be there at the end and be a challenger,” he said.

“As long as we believe that we’ll be ok.

“But it’s my challenge. It’s all our people’s challenge to pick them up and look on the bright side and be supreme optimists.”

Meanwhile, former Bulldogs and Richmond player Nathan Brown has warned Wallis not to rush his recovery.

Like Wallis, Brown broke the same two bones while playing for the Tigers in round 10 of the 2005 season.

He returned in round one of the following season but “came back too early”.

“The only thing I’d say to Mitch Wallis is you’re a young kid, you’ve got a lot of time. Don’t try and rush it,” Brown told the Nine Network on Sunday.

“Everybody told me not to rush it. I did and I was probably never the same player.”

Watch as Nathan Brown breaks his leg in 2005 (warning: graphic)

Many of Wallis’ teammates were crying in their changeroom on Saturday, when the 23-year-old screamed in agony as he was taken to hospital.

Brown backed Wallis to return to his best.

“He’s a tough kid. He comes from a good family and I think he’ll be right,” he said.

But the two-time All Australian added there would be some long and very frustrating nights ahead.

“Hospital is the easy part … when you get home that’s the real hard part,” Brown said.

“Because you can’t move your leg … you can’t put it down anywhere. You can’t lift it up.

“So you’re in bed for probably the next two weeks. I remember every night for probably two or three weeks, just sweating profusely during the night because of the painkillers.

“You just lay there in a wet bed.”

Brown recalled the initial feeling was “unbelievable pain, you think the world is going to end”.

“Then it just subsides for a little bit … and it’s almost like shock takes over your body,” he said.

Brown, who played 137 of his 219 games with the Bulldogs, planned on reaching out to Wallis when the time was right.

“He’s got bigger thing to worry about (than football) at the moment.”