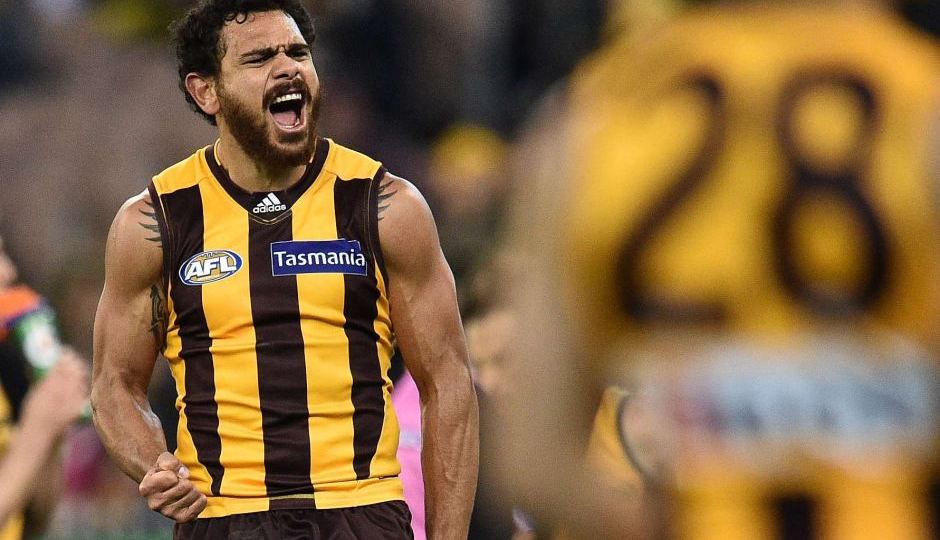 Hawthorn have maintained their two-win cushion at the top of the AFL ladder in ugly fashion, defeating Richmond by 70 points at the MCG.

The Hawks left their kicking boots at home but saluted Sam Mitchell, who was a super contributor in his 300th game in brown and gold, with an eighth-straight victory.

After a lacklustre first half in which most goals came from opposition errors, two goals in a minute felt like a gift from the gods.

Majors from Jack Gunston and Cyril Rioli elevated the contest, giving the 51,892-strong crowd something to cheer and Hawthorn a match-winning lead.

They piled on the sorry Tigers with a nine-goal final quarter, with the Hawks improving from 7.17 to 16.18 with a late burst of accuracy.

Rioli was the only multiple goal-kicker not to blot his copybook, finishing with 3.0.

Richmond were ponderous in midfield and without a forward-line threat, finishing with their lowest score in seven years.

Back-line blunders from Nathan Drummond and Ben Griffiths kept Hawthorn on top when the game was on the line.

Those not focusing on the scoreline were kept entertained by a stats shootout between milestone man Mitchell and red-hot Tiger Dustin Martin.

The ball magnets were the busiest two players on the ground, with Martin’s 39 touches outdoing Mitchell with 38.

Brad Hill, who is considering a move away from the Hawks at season’s end, was excellent, while Josh Gibson barely lost a contest in the Hawthorn defence.

Brisbane eased the pressure on coach Justin Leppitsch and likely consigned Essendon to the AFL wooden spoon with a 37-point win at Etihad Stadium.

It was Brisbane’s second win this season and leaves them a game clear of last-placed Essendon with five rounds left.

Daniel Rich had his best game of the season off half-back, captain Tom Rockliff was outstanding through the midfield and Mitch Robinson shut out Essendon playmaker David Zaharakis.

It was a dirty day for Essendon, who had come into the match as favourites for the first time this season.

One notable positive was a fine AFL debut from defender Aaron Francis, their second pick at No.6 in last year’s national draft.

Injury had delayed the start of his senior career and he immediately showed why the Bombers are so excited about his potential, taking some excellent intercept marks.

The Giants overcame a lacklustre start in wet and blustery conditions to claim an 11.13 (79) to 9.6 (60) win and cement their chances of a home final.

GWS managed just two goals to halftime but surged to life in the third term, booting four majors in a row during a pivotal 10-minute stretch.

Late goals to sharpshooter Jeremy Cameron and best-on-ground midfielder Dylan Shiel secured the win to propel the Giants to second place on the ladder.

The loss keeps Port Adelaide 12 points behind eight-placed North Melbourne and almost certain to miss out on playing in September.