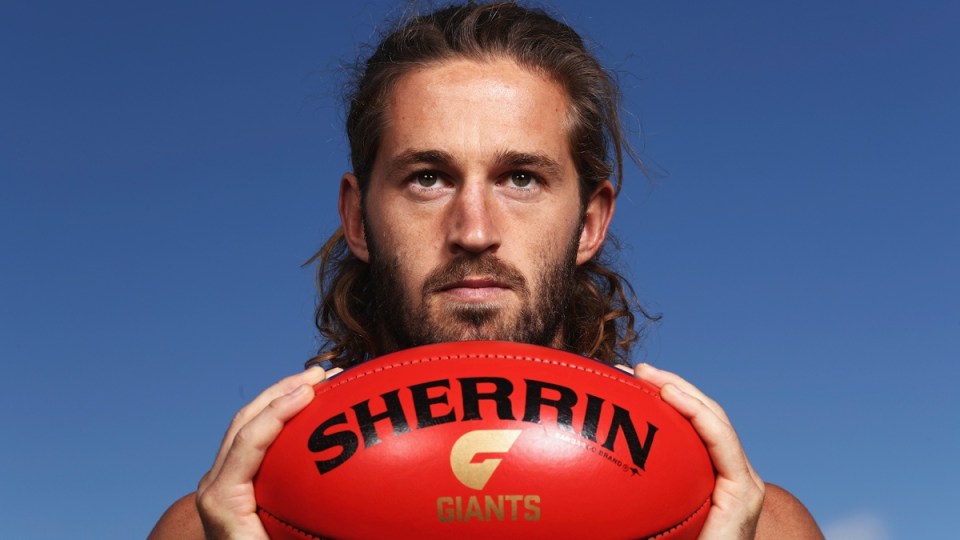 Callan Ward is the heartbeat of the Giants. Photo: Getty

Tough is a word thrown around far too often in football, yet for some, it fits the bill perfectly.

As captain of one of the best teams in league history, his leadership is based around ruthless aggression.

Despite not having the accolades or league-wide appreciation of Hodge, one man who embodies this is GWS captain Callan Ward.

On Sunday evening, Ward will lead GWS out onto the field at Adelaide Oval, making him the first Giant to reach 100 games with the club.

He joined the AFL’s newest club as an uncontracted player at the end of 2011, and would have been all too aware of the turbulent times early, but also with the knowledge that long-term rewards were up for grabs.

Since then, he’s amassed countless accolades with his new team and has been the benchmark for his younger teammates, despite being only 21 when joining the club.

He kicked the first goal in the club’s history, won their inaugural Kevin Sheedy medal for the club’s best-and-fairest and has played in at least 20 games in every season.

Five years later, it’s clear that Ward is the heart and soul of the Giants and a significant catalyst for their new-found success in 2016.

Must watch
Adelaide’s trip to the Cattery to face Geelong has significant ramifications on the structure of the final eight. The match also pits Rory Sloane against Patrick Dangerfield once again and may be the deciding match-up for the Brownlow Medal.

Most at stake
The Recruit. Season Two kicked off on Foxtel this week and after inaugural winner Johann Wagner managed just one season with Port Adelaide, the verdict is still out as to the legitimacy of the program.

Will happen
The loser of Essendon v Brisbane will carry the number one pick at season’s end.

Won’t happen
Charlie Dixon’s injury has left the door open for John Butcher to reclaim himself at AFL level. He’s struggled in the big league for years, though, and Port Adelaide winning off Butcher’s own boot is simply something we won’t be seeing in Round 18.

One to watch
Collingwood’s Brodie Grundy played one of his best games last week, reminding us that he’s the best young ruckman in the league. If he can overcome North’s Todd Goldstein this week, he has a strong case in becoming the league’s best.

Trending
Brisbane have kicked in long through the corridor 53 per cent of the time from behinds over the past three games. In that period they’ve lost by an average of 49 points so it is a strategy isn’t doing them any favours.

Feeling the heat
Justin Leppitsch is under fire more than anyone and a loss this weekend to Essendon, who are in much better form, could force the Lions’ board to make a decision on their coach.

Pick me
Sam Menegola had 46 touches, five marks and four tackles for Geelong’s VFL side over the weekend. Chris Scott labelled his side “not top-four material” yet Menegola wasn’t picked, again. What more does he have to do?

The whisper
Which rising GWS star is being heavily courted by Victorian clubs?

Don’t set the IQ
Saturday’s encounter at Metricon Stadium is a dead rubber featuring the injury-ravaged Gold Coast and Fremantle. You surely have better things to do than watch this.

Unvaccinated Pauline Hanson has COVID
‘Should have been a penalty’: Boy crash-tackled by PM gives his verdict
Amber Heard’s sister and friend give evidence
Russian Google to file for bankruptcy
Man arrested at NSW school for bestiality
Concern about COVID-19 deaths in aged care
Campbell Brown: Sam Mitchell is one of Hawthorn’s greatest
Today's Stories

This underrated man is the AFL’s next Luke Hodge