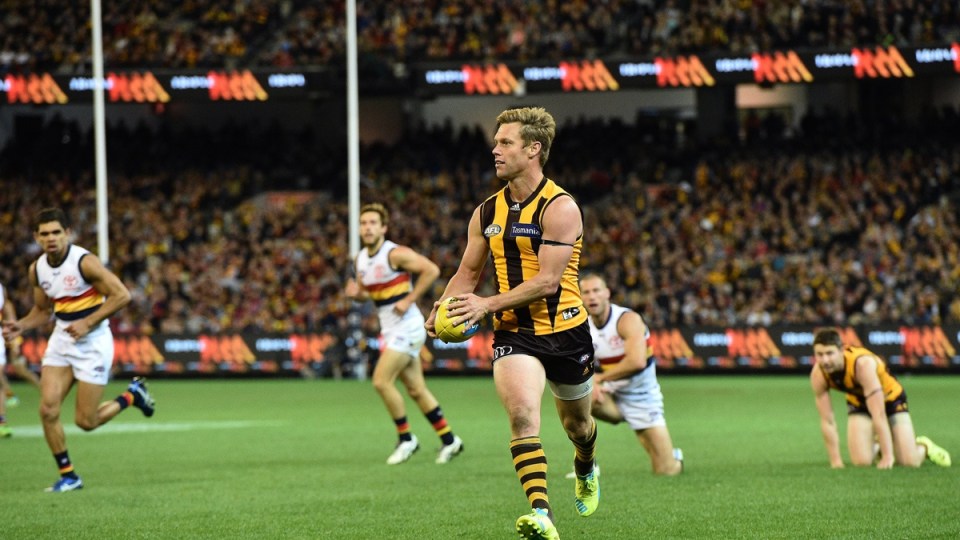 The lure of a post-playing coaching deal has lured Sam Mitchell. Photo: AAP

Sam Mitchell’s AFL journey started on the same October day as mine.

Sam had hoped to be taken in the 2000 draft but was overlooked. After that, he sent a DVD of his highlights to all 16 clubs.

Most clubs didn’t respond, but Hawthorn invited him down to its VFL affiliate, Box Hill, and he never looked back.

When the senior players arrived at the club for my first pre-season, Sam shadowed Shane Crawford everywhere, from football drills to the gym and meetings.

It was a brave move.

Shane’s work rate was famous but that didn’t stop Sam, who worked his socks off.

He was also blunt with his opinions from the start.

You always knew where you stood with Sam – a quality that I think will make him a superb coach once his playing days end.

In those early years when the Hawks still trained at Glenferrie Oval, we’d do a couple of 1km runs before training to get the body moving.

The fitness staff always told us to do them at our own pace and to take it easy if we were sore.

That didn’t suit Sam’s competitive streak, though, and he used them as a race and an opportunity to gain a fitness edge on some of his teammates.

He just wouldn’t allow himself to go through the motions and, as a result, earned himself the nickname ‘Haile’ after the legendary Ethiopian distance runner Haile Gebrselassie.

Sam didn’t last long in the VFL, but his 11 games in 2002 were enough to win him the competition’s best-and-fairest award.

Amazingly, he polled best-on-ground votes in 10 of them.

The footy world first started to notice Sam when some media commentators highlighted just how good he was at winning clearances and nicknamed him ‘The Extractor’.

Because Sam wasn’t blessed with the attributes of a modern footballer, like speed and size, he has had to continually re-invent himself.

First it was the pressure of being Hawthorn’s premier ball winner, then dealing with taggers, then developing a reliable left-foot kick, then becoming captain, then leading the Hawks in big finals, then playing across half-back.

AFL is skewed towards athletes, but Sam has continued to buck the trend and prove that players with smart football intelligence and ball-winning ability can still dominate.

Watch highlights of Sam’s career below:

He is one of the few players to have ever played the game who is equally as good on both sides of his body and, if you asked him now, he would tell you he is a left-footer.

It is a kick on his left foot that stands out as my favourite memory of Sam.

We were 21 points up in the last quarter of the 2008 Grand Final against Geelong with just over 10 minutes to go when he marked just inside the forward 50, played on and kicked truly.

It was the moment we knew we were home and I’ll never forget the pure joy on everyone’s faces. We were going to be premiers.

What many people don’t know about Sam is how tough he is. He is the toughest player I played with.

Because of the way he plays, he often got injuries that should have ruled him out for three or four weeks.

He continually surprised everyone by getting himself up to play and while it’s one thing to play injured, which every player has done, it’s completely different to dominate. Sam just did it.

I’m a big believer that you get what you deserve in football.

Sam’s work ethic and dedication have made him the superstar he is.

When he finishes his career, he will comfortably sit among Hawthorn’s top five players ever.

I think he’s certain to be a coach too. He was always interested in game plans and strategy. And, most importantly, he knows what it takes to be successful as a player – and as a club.

But there’s plenty of games left in Sam before any of that. The 300th comes against the Tigers on Sunday.

Campbell Brown played 205 AFL matches and was a member of Hawthorn’s premiership team in 2008. Read more of his columns here.

Campbell Brown: Sam Mitchell is one of Hawthorn’s greatest