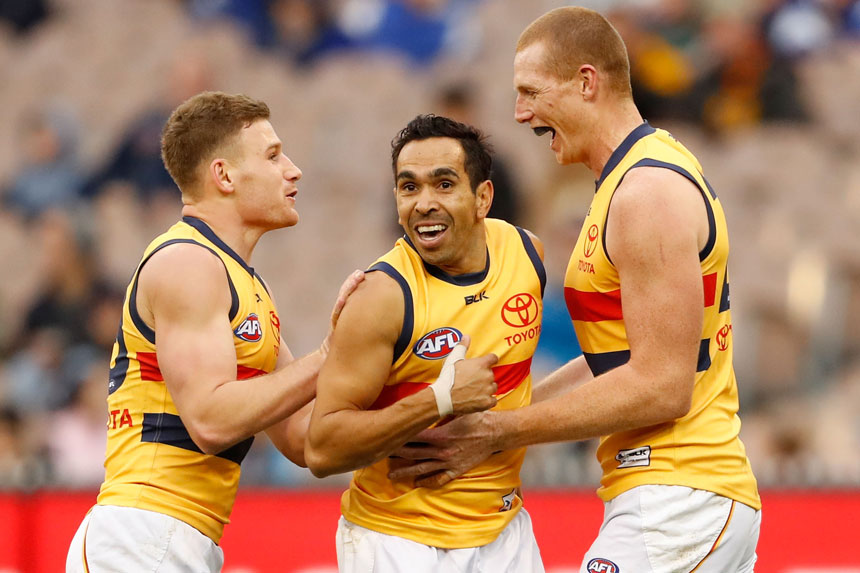 The 2016 AFL season has been one of the most open in recent memory.

Over the past few months, we’ve seen nearly every top-eight team thrown into the ring as the likely premier.

The first contender was North Melbourne, but their 9-0 start to the season is now a distant memory.

They have won just one out of the past five, though, and are back to being the good-but-not-quite-good-enough team they’ve been in recent years.

Their match against the Power at Docklands on Saturday night shapes as season-defining.

The Cats were next, after two dominating performances over fellow contenders, but two straight losses and all of a sudden there’s talk of player rifts at the Cattery.

Adelaide is now the new team in vogue after seven straight wins and their attack looks seriously impressive.

But who is to say it won’t be someone else in two weeks – maybe the Dogs or those three-time defending premiers everyone seems to have forgotten about in the Hawks.

Everyone has no idea.

And that’s great news for us footy fans.

Must Watch
Collingwood’s trip to the Adelaide Oval on Saturday night is seriously intriguing. The Pies are in great nick – but so are the Crows. Could we see an upset in Scott Thompson’s 300th match?

Most at stake
Melbourne. They haven’t beaten St Kilda since 2006 and have an atrocious record at Docklands. At some stage, they have to beat the Saints – and show they can turn up at any ground and perform well.

Will happen
The Eagles get over their fear of flying and win a game on the MCG against a Carlton side running out of steam.

Won’t happen
Port Adelaide giving a yelp on the road – it’s the same old same old with this team. Expect them to play North Melbourne back into some form.

One to watch
“Two-Metre Peter” could be the most exciting young key forward – with the best nickname to boot. A tough test against the Dogs awaits this week for Wright.

Trending
Attacking the opposition’s biggest strength as their weakness. The Pies did it to GWS last week, who will it be this week?

Feeling the heat
Steven Motlop is running out of chances to get out of his form slump and another poor performance will see him playing in the VFL.

Pick me
Jack Billings had 45 disposals for Sandringham in the VFL. Now is his time to shine in the AFL and show why he was picked ahead of Marcus Bontempelli in the draft.

The whisper
The big key forward from Adelaide with lots of cash on the table…there’s a fair chance he ‘dons the sash’ next season.

Don’t set the IQ
Brisbane v GWS. Sunday twilight footy. This game should only be watched for fantasy football purposes.

This is the beauty of the 2016 AFL season